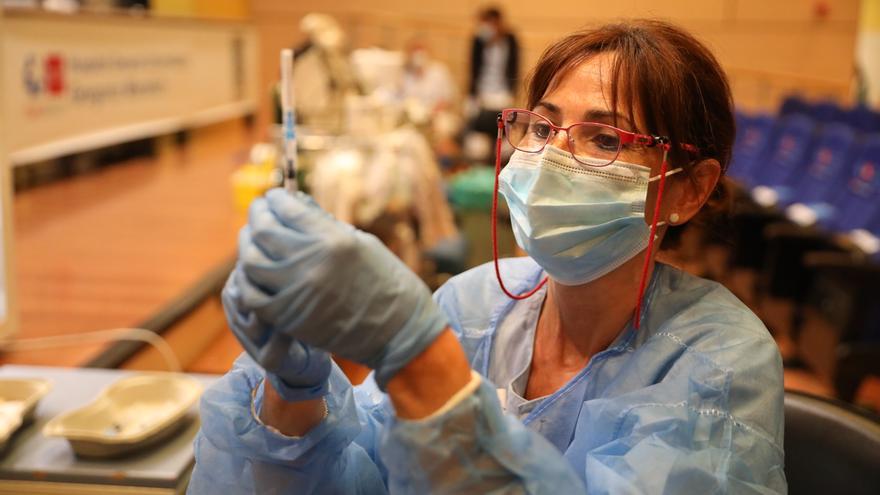 The Ministry of Health already has the first conclusions about the effectiveness of vaccines after putting a specific working group to analyze how the immunity they grant behaves. Technicians from the General Directorate of Public Health, the Carlos III Health Institute and the Spanish Medicines Agency have stopped to scrutinize how protection against infection varies depending on the vaccine received: Pfizer, AstraZeneca, Moderna or Janssen .

The results, based on the follow-up of those infected between 50 and 59 years of age during the month of August (all immunized), reveal differences in the level of effectiveness against infection with symptoms, from 89% of Moderna to 56% of Janssen . In the face of severe illness and death, however, vaccines from all laboratories offer greater than 86% protection. “Vaccines have been highly effective in all age and sex groups since the start of the vaccination program, which has resulted in a significant impact in terms of reducing the incidence of infection, hospitalization and lethality in the groups. vaccinated, “says the document, published on October 13.

The main conclusion is that the Janssen vaccine shows substantially less effectiveness than the rest against “symptomatic infection”; that is, to become ill with symptoms. It is 56%; followed by AstraZeneca (68%), Pfizer (78%) and, with the best result, Moderna (89%). The study was carried out in August, when the major variant in circulation was delta, and it reveals another relevant novelty: the combination of AstraZeneca with another injection of messenger RNA (Moderna or Pfizer) is more effective than the homogeneous regimen (that is, a second dose of AZ).

In addition, the results acquire relevance, beyond the differences between vaccines, because the effectiveness – the real one – is not the same as the efficacy estimated in the trials of pharmaceutical companies. Pfizer announced an efficiency of 95% after its most advanced analyzes in November 2020. Moderna put it at 94.1% and the laboratory that developed AstraZeneca said it was 76%.

Janssen’s vaccine was less effective than its competitors from clinical trials, although it is true that it is not possible to compare analyzed vaccines with different experimental designs carried out in different populations and times. But that difference has been maintained in studies carried out to estimate the effectiveness of vaccines in real conditions.

A recent study published in the magazine NEJM, carried out with people over 50 years of age between January and June 2021, calculated an effectiveness for the Johnson & Johnson vaccine of 68% in preventing hospitalizations and 73% in preventing ICU admissions. In this case, the analysis carried out by the group of Health technicians raises the figure to 86% and 89%, respectively.

Those immunized with Janssen’s single-dose serum – the only one that completed the regimen with a single injection – are in all likelihood the next group for which a booster dose will be recommended. The Vaccine Conference will soon propose it to the Public Health Commission after starting this Monday the administration of a third dose to people over 70 years of age. The Minister of Health, Carolina Darias, always ensures that the vaccination strategy is in a constant review process and it is very possible to add new groups depending on the analysis that is being developed on the (still uncertain) behavior of immunity.

The effectiveness against hospitalization and, in the worst case, death, is much higher: between 94 and 98% for all vaccines, except for Janssen. The analysis carried out by the technicians reduced it to 86% and 89%, respectively, with the single dose, but Health warns that “the effectiveness figures are still high.”

How have these data been estimated? The experts explain that an “epidemiological design has been used that compares the cases reported to the epidemiological surveillance system (SiViES) with the vaccination coverage in the population (REGVACU)”. It is called the screening. As data on the severity of cases is available in the surveillance system, the design allows estimating the effectiveness of the vaccine in preventing infection (PCR test or positive antigen detection), symptomatic infection, severe disease ( hospitalization) and death.

The profuse document published on October 13 also measures the risk of SARS-CoV-2 infection at any level of severity. “It was 2.17 times higher for people who had been vaccinated with Janssen than for those vaccinated with Pfizer,” says the analysis, which reveals a reduction in risk in those immunized in a first puncture with AstraZeneca and in a second with Pfizer.

It is an a priori counterintuitive effect since most of the population decided to inoculate with the same type of vaccine despite the fact that the safety of a heterogeneous regimen had been proven in the CombivacS study. “The lowest risk was shown by people vaccinated with two doses of Moderna vaccine, who had a 45% lower risk of infection than those vaccinated with Pfizer,” the technicians decide.

How was this measured? People born between 1962 and 1971 with a complete regimen and without positive tests before August 1 were also selected. “The risk of a first positive test for SARS-CoV-2 in SERLAB between August 1 and 31 was studied – the methodology explains – and a direct comparison was made between each type of vaccine with the Pfizer vaccine, which it acted as a reference, as it was the vaccine that had been used in the most numerous way “.

The study is a continuation of a first version published in April that was focused only on nursing homes. Now this data has also been updated. Those vaccinated in March or earlier had reduced their protection to 58% against SARS-CoV-2 infection, although it is not yet clear whether because their initial response was already lower or because it has been lost more quickly.

The barrier to serious illness and death, however, had not fallen that much: it remained between 65% and 77%, respectively, according to a document published by the Ministry of Health on October 13 that analyzes the effectiveness of vaccination. against COVID-19 in Spain. This version already points to a possible “loss of immunity over time”.

The update of the analysis also incorporates results by age and by sex. “It is observed how the effectiveness of vaccination is slightly lower in women than in men against infection and symptomatic infection, while there are no differences in hospitalization and death,” says the document, which also underlines that the effectiveness against The infection in the younger age groups “is less than in the older ones, especially in the months of July and August”. These differences are not observed, however, in the case of hospitalizations and deaths.