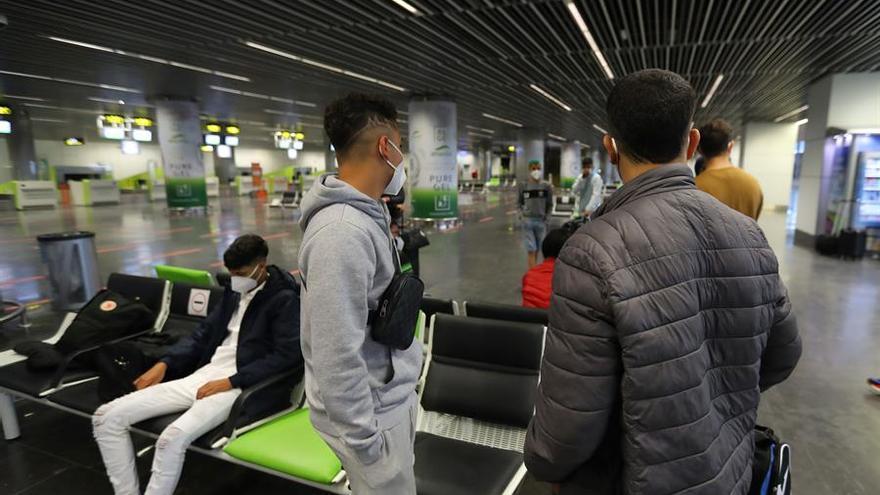 The vicious circle of social exclusion begins and ends in poverty, but inevitably passes through education. And, usually, with more problems than solutions. The average 16-year-old at risk of exclusion is a man who has repeated a grade at some time, probably more than a year, who does not have a scholarship, was born in Spain, lives in a medium-sized urban nucleus and has changed study center and of domicile in some occasion. Less than one in a hundred will make it to college.

This is the profile of young people at risk of exclusion obtained by Youth and Social Inclusion from a study among 16-year-old boys and girls with whom this NGO works (which groups together ten associations from ten autonomous communities throughout Spain), that has been presented this Thursday in Madrid. "Eight out of ten of these young people will continue their entire lives in poverty," warned Carlos Rosón, president of the association. "We cannot continue to ignore that educational results have a lot to do with inequality. The higher the levels of inequality, the worse the academic results, condemning our young people to a cycle of exclusion," explained Rosón, who has denounced the situation of this group based on a "devastating" statistic.

Specifically, 92.4% of young people - who at the age of 16 should be in 1st year of Baccalaureate or in a Middle Grade FP cycle - have repeated a course, a statistic that in the general population is 28.7%. In other words, only seven out of every hundred of them are in the course that would correspond to them. In addition, one in six has not finished Primary (which ends with 12 years in theory).

There is the paradox, Youth and Inclusion denounces, that this especially vulnerable group does not usually enjoy scholarships to study. 76.9% of them do not receive any help compared to the remaining 23.1% who do. "They are generally awarded for academic reasons [además de los criterios de renta] and with the repetition of the course, access is lost ", explained Lidia González, vice president of Youth and Inclusion.

From the NGO they remember how the circle of social exclusion is fed back. "These young people are going to drop out of education. They will start looking for unskilled jobs, and according to the La Caixa Social Observatory, school failure determines an employment rate of 60% (compared to 90% of people who have completed secondary or secondary studies). In addition, these less qualified jobs are more temporary and are less well paid, so this scenario of low training outlines a complicated future for young people at risk of exclusion (...) to reverse the path to exclusion. poverty and exclusion are practically hereditary, "says the NGO. Its president recalled this Thursday that the OECD estimates that a family with few resources takes four generations to get out of poverty.

The NGO warns that the number of young people at risk of social exclusion is growing. What in 2019 affected 27% of the child and adolescent population a year later has risen to 30.3%, according to the AROPE report on the state of poverty in Spain that is about to be published.

And that general statistic, those already "unacceptable" percentages, according to Jóvenes e Inclusión, worsens when the group at risk of exclusion is broken down into population groups. "When we talk about young people at risk of exclusion with a family, it influences that the cultural capital of that family, their ability to help with homework, for example, is diminished. Also their social capital, that network that can help you at certain times" , explains Rosón. "Well, if we talk about young people under guardianship, they don't even have that family, even if it is with diminished capacities. Migrants would be a third step, because the limitations of other groups also include not having a family or, perhaps, not speaking the language. It is a tougher situation and it is the groups in which changes of center and residence occur most frequently, two factors that greatly influence the results, "he says.

Statistics are not deceiving. Yes, among the most disadvantaged young people, only unaccompanied minors are looked at - one in seven young people at risk of exclusion and mostly men - all of them have repeated, according to the data of this association. Not one of the almost 5,000 young people with whom the NGO works has a scholarship and does not go to a subsidized school, despite the fact that in theory they should host students under the same conditions as the public.

The same thing happens with the young women under guardianship. These girls (six out of ten minors under guardianship are women), who join the poverty situation together with family breakdown, account for 28.7% of minors at risk of exclusion. They are mainly of Spanish origin and more than nine out of ten have repeated a year. The change of study center (72.9%) and address (64.9%) are common among them.

The Youth and Inclusion report focuses on 16-year-olds, but it doesn't stop there. The associations that make up the NGO (Inserta Andalucía, from Andalusia; FAIM, from Aragón; Identity for them and for them, from Asturias; Hestia Association, from the Canary Islands; Vasija Association, from Castilla-La Mancha; ASECAL, from Castilla y León; Associació Educativa Itaca, from Catalonia; Igaxes, from Galicia; the Natzaret Foundation, from the Balearic Islands; the Pioneros Foundation, from La Rioja; and Redes Cooperativa, from Madrid) have also evaluated the employment situation of some of the people with whom they have worked in the last years. And the prospect is "not very encouraging," they explain.

Last year, especially complicated by the pandemic, the associations' job placement services doubled the number of people they served, and even so they managed to place half the number of the previous year. The 1,131 people who found a job in 2019 were 1,023 in 2020, with an average duration of 2 months and 25 days. "The labor reality is that during the pandemic year, job destruction was 3.1% and it skyrocketed in sectors such as hospitality, commerce or tourism, which traditionally offer outlets to many people without studies," explains the report on the fall in labor insertion.

"We need to recover the possibility of getting out of a situation that perpetuates poverty and exclusion generation after generation and, for that, our great tool is related to the educational system: the urgent need to equip the educational system with the basic tools that allow it offer each student what they need so that personal difficulties do not become an impossible backpack to carry, "they conclude from Youth and Inclusion. The NGO calls for an increase in programs based on equity for young people and adolescents, a review of the criteria for granting scholarships and autonomy of the centers to promote and carry out innovation experiences.

"If you compare the indicators [entre los jóvenes en riesgo de exclusión y la población general], from access to education to access to work, we understand that these children are being left behind, and they have the same rights as everyone else, "closes Rosón.