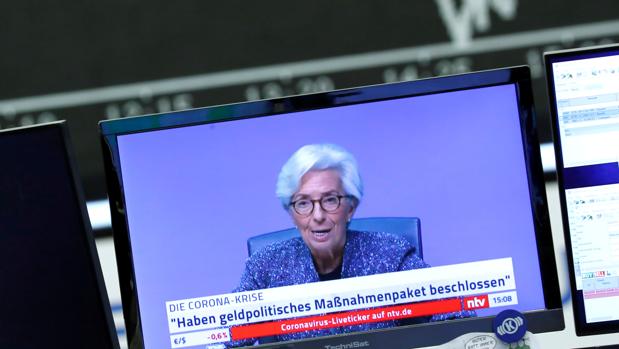 The historic aid package due to the crisis forced by the pandemic is having an effect, but the ECB notes that it is not in all countries equally. The minutes of the last meeting of the governing council of the European entity reveal the concern of the union for areas that are lagging behind. "An uneven and partial recovery in the euro zone can be confirmed," says the document published today in Frankfurt, which corresponds to the notes made at the meeting in mid-July. “While financial markets were calmer than at the peak of the pandemic crisis and incoming data indicated short-term activity that was in line with the baseline scenario of the June macroeconomic projections, the situation remains fragile and risks they persist on the downside, "concluded the ECB's governing council at last month's meeting. The minutes show that the directors of the European central banks stated that the recovery of financial conditions has collided with the evolution of the pandemic in the United States and many emerging market economies, which has generated "fears about a relapse in containment of the spread of the virus. This divergence between the evolution of the pandemic and the evolution of financial markets, together with the high uncertainty about the final form and pace of the economic recovery and the resurgence of global trade tensions, 'raises questions about the robustness and resilience current investor sentiment. ' However, the minutes noted that, "in general", the political, monetary and fiscal response in the euro zone has managed to "relax financial conditions and restore confidence in the recovery of the economy." Even so, the magnitude of the crisis means that the governing council of the institution maintains its broadly accommodative position and with ample "stimuli to support the economic recovery and return inflation to its pre-crisis trajectory." Thus, due to the still high uncertainties, the ECB reiterated that "it will do everything necessary within its mandate and remains ready to adjust all its instruments, as appropriate, to ensure that inflation progresses towards its objective in a sustained manner". "Financial market conditions continue to normalize progressively, but remain more fragile than before the pandemic," the minutes also say, which attribute to monetary and fiscal measures the merit of the normalization achieved. Although also that "market developments may be based on overly optimistic expectations about the recovery package and vaccine developments." "Uncertainty around the economic outlook remains high", judging from the information handled by the ECB, and not all board members agreed that the pandemic emergency purchase program (PEPP) will stay How is it going. Some members pointed out that in their opinion it should have "a limit, not an objective", although for the moment it was established to continue with the plan as before and to use the PEPP in its entirety. In September, the ECB council expects "to have more clarity on the evolution of inflation" and also stated that they need more data to assess the future trajectory of the euro economy. Let us remember that the July meeting did not include changes in monetary policy, but the President of the ECB, Christine Lagarde, emphasized the flexibility of the Emergency Purchase Program in the face of the pandemic, a recurring theme in the minutes of the meeting, giving it a support line to the euro. .