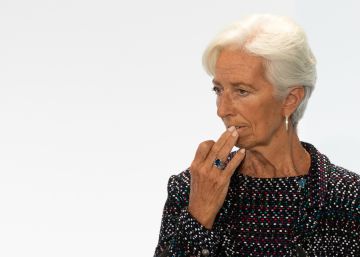 The ECB announced in September that the collapse of the euro zone’s GDP this year would be somewhat shallower than predicted in June, but the speed at which the coronavirus pandemic is spreading again raises concerns about the economic forecasts released just a few years ago. weeks. The Governing Council of the ECB meets today in Frankfurt amid the second wave of the pandemic in Europe and when restrictions on mobility have already become generalized. Investors have long awaited a new boost to the purchases of debt from the ECB to face a crisis of which it is an impossible task to venture an end, but the decision would not yet arrive at today’s meeting.

The possibility that Christine Lagarde will surprise and announce today the increase of the debt purchase program exists. The lack of control with which the coronavirus returns to circulate in Europe is the prelude to this and the ECB would thus give a renewed blow of confidence to the economy and investors but the majority impression in the market is that the ECB will take more time before increasing the size of the extraordinary anti-pandemic purchasing program, at least until the December meeting, in which it will once again update its economic forecasts, in which it will already include the first estimates for 2023.

Estimates released in September – of GDP growth in the euro zone of 5% in 2021 – are still hot and in December will be the time to assess in detail the economic scope of the second wave of the pandemic. And also to respond to two other major sources of uncertainty, such as the outcome of the elections in the United States and the outcome of the Brexit negotiations.

“Changes in monetary policy are not expected at this meeting, but the growing risks make it likely that there will be more stimulus in future appointments”, says Peter Allen Goves, European Interest Rate Strategist at MFS Investment Management. From AXA IM, its chief economist Gilles Moëc, points out that the ECB will most likely prefer to wait until December for its next move. It will be when it has “more visibility about external risks”, such as the pandemic, Brexit or if the result of the US elections has ended up being challenged in court.

In favor of this wait, Chirstine Lagarde also has a relatively calm financial market, despite recent investor concern and stock market swings. The sovereign debt of the most indebted countries and sensitive to a rebound, such as Italy or Spain, remains at a minimum area. So far, this situation is allowing the ECB to keep its weekly debt purchases at very low levels, which continue in line with the month of August. Faced with greater tension, the ECB would still have the option of increasing these purchases before announcing an increase in the program. In the past week, the PEPP program increased by 16,264 million euros, far from the more than 30,000 million in the weeks of greatest tension, to a total of 616,856 million euros.

The ECB has managed to keep the cost of financing for governments, companies and individuals in the euro zone under control, but the market awaits a new step forward, an expectation that also largely explains the current stability of the financial market. “The market would be disappointed this Thursday if it does not receive a clear indication of more action in December,” Gilles Moëc warns.

In fact, everything indicates that the ECB will have to act decisively again. Only the euro seems to have given a bit of a truce in recent weeks and has slowed its appreciation against the dollar, a refuge in times of growing uncertainty such as the current one. The European currency remains at levels similar to those of the September meeting, when the ECB avoided new measures, although it did acknowledge the pressure of its appreciation on inflation expectations.

In favor of more stimulus, and without losing sight of the euro, the fact that inflation in the euro zone is still far from the target plays a role, at a rate of -0.3% in September, while the economic take-off faces new obstacles . “The Governing Council will prepare the ground today for a decision in December. They will probably express their growing concern that the recovery is losing traction and is increasingly uneven by country, “they say in Goldman Sachs, where they wait for a signal from the ECB that it is willing to act quickly. His forecast is that the PEPP will be expanded in December by 400,000 million euros and extended by the end of 2021. Firms like Citi predict an even greater expansion, of 500,000 million euros in December. And in PIMCO they bet on an increase of up to 600,000 million euros in the next appointment.