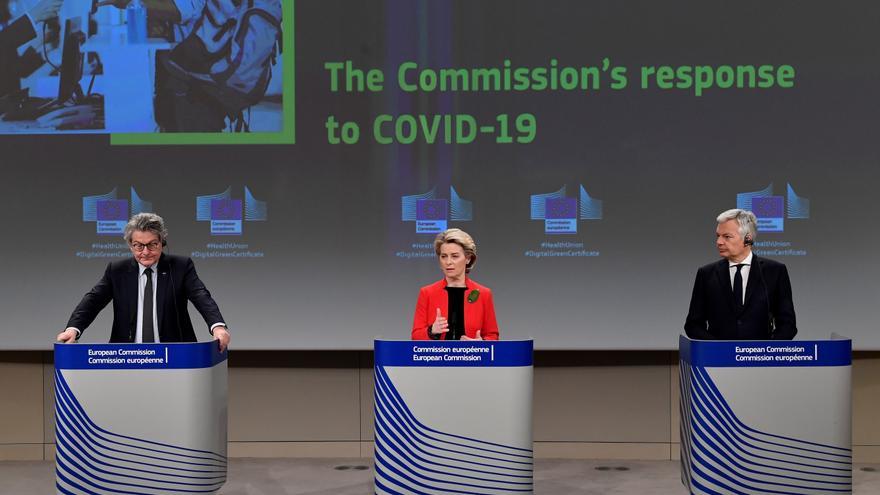 Brussels, Mar 17 (EFE) .- The European Commission (EC) presented this Wednesday the digital certificate of vaccines of the Covid-19, with the intention that it is ready before the summer to be able to reactivate travel in time in the tourist season .

“We want to help Member States to restore freedom of movement in a reliable way,” said EC President Ursula Von der Leyen, to which Justice Commissioner Didier Reynder added that Brussels hopes the document is ready ” before the summer, maybe in June. ”

In order for this to be possible, the European Parliament and the EU countries must first give the approval to the proposal, among which there are some such as France or Belgium that have expressed their reluctance about the possibility of discriminating against people who have not been vaccinated, taking into account, in addition, that the vaccination rate is lower than expected.

Brussels, however, denies that there is such discrimination, because those who have not been vaccinated will be able to demonstrate that they have antibodies if they have passed the covid, with a PCR test or an antigen test with a negative result.

However, the proposal does not resolve the economic discrimination that may exist with respect to those who have to pay for the PCR test or the antigen test, an issue that, according to community sources, the national authorities will have to resolve.

The certificate, however, will be free and can be presented both in electronic format -with a QR code- and on paper -with a barcode-, so that it can also be used by those without a smartphone.

According to the EC, the system will guarantee the veracity of the data, without being falsified, and for the certificate to be recognized in all Member States, it will be available in the official language of the country that issues it, and in English.

The Community Executive intends that only vaccines authorized by the European Medicines Agency (EMA) be recognized, although it gave permission to governments to accept other drugs, such as the Russian Sputnik V or the Chinese Sinopharm.

The certificate is designed to reactivate travel in the EU and will also be accepted in Norway, Iceland, Switzerland and Lichtenstein, extending it to the European Economic Area (EEA).

In addition, Brussels intends to collaborate with third countries that have similar certificates, although the mentioned sources do not believe that agreements on the interoperability of the document can be reached before the summer.

In any case, the health passport will be temporary and will expire when the World Health Organization (WHO) declares the end of the pandemic because “we will return to normal free movement,” Reynders said.

And in addition, it will be restricted to travel – in any mode of transport – and not to other possible uses such as attending cultural events or entering shops.

In order for the certificate to work, it is necessary for the vaccination campaign to advance, said Von der Leyen, and in addition, it must do so because “the epidemiological situation is worsening due to the variants and we see that in some Member States the crest of a third wave is forming. “.

As explained by the German leader, 360 million doses are expected in the second quarter, taking into account those of Pfizer-BioNTech, Moderna, Johnson & Johnson and AstraZeneca, which has already warned that it will not be able to fulfill its initial commitments for the first half of 2021.

In order to guarantee the supply of vaccines to the EU, Von der Leyen today threatened the United Kingdom with the possibility of blocking the export of the doses manufactured in Community territory, if London does not correspond in the same way with those produced within its borders.

“In our contract with AstraZeneca there are even two plants in the UK that are listed for potential vaccine delivery to the European Union. We are still waiting for the doses to arrive from the UK. This is an invitation to show us that there will be doses. of the United Kingdom that arrive at the European Union, so that there is reciprocity “, indicated Von der Leyen.