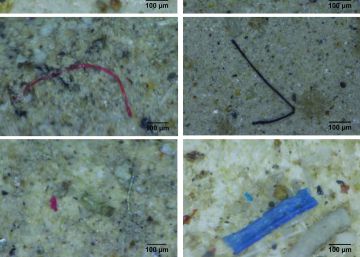 A research by the Institute of Environmental Science and Technology of the Autonomous University of Barcelona (ICTA-UAB) has analyzed the concentration of microplastics in the Ebro delta, with the aim of quantifying it. According to the study, it is estimated that the Ebro River annually pours 2,200 million microplastics into the Mediterranean Sea.

Microplastics are particles or filaments of less than 5 millimeters, and may be those used as raw material to create other products (known as primary products) or those generated by the degradation of larger (secondary) plastics. 70% of those that were found corresponded to synthetic fibers, plastic fragments and films. Laura Simón, one of the authors of the study, explains that those who have been found mostly have a textile origin. "We have to continue investigating to see what impact our clothes really have on the environment," he says.

The article, published in the magazine Science of the Total Environment, describes that rivers are one of the largest entrances of plastic to the seas and oceans

The article, published in the magazine Science of the Total Environment, describes that rivers are one of the largest entrances of plastic to the seas and oceans. Later, this type of pollutants accumulates on the beaches. The author, who is a researcher at ICTA-UAB, assures that the entire water column has not been analyzed, but only the most superficial areas of the river, the beaches of the north of the Ebro delta and the sediments, so the concentration of These microplastics could be higher.

The Ebro river is the second longest in the Iberian Peninsula. However, the authors believe that the abundance of these pollutants could be higher in rivers near urban areas, which do not have to be especially long or large.

Simón shows that it will be necessary to continue investigating the possible risks that human accumulation of this type of pollutants can have on human health in fishing and aquaculture zones: "The zone of the Ebro Delta and the surroundings is important for sport fishing and the fish farms there are, so it is essential to quantify how many microplastics there are in the environment and how they can affect the organism. "

Recently, a study conducted by gastroenterologists at the University of Vienna analyzed the faeces of a group of people from nine different countries and found that, on average, there were 20 microplastics for every 10 grams of fecal matter, coming from nine different types of plastic. It was confirmed that the plastics are reaching the instestino. However, the impact of this type of contaminants on the health of humans is a question to which science must still respond.