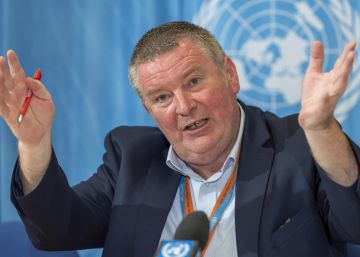 Finally, good news. The World Health Organization (WHO) reported Thursday that the Ebola epidemic in the northeast of the Democratic Republic of the Congo (DRC) since August 1, 2018, it is “confined” in a small region between the provinces of Ituri and North Kivu, but also warns that this rural area is difficult to access due to the insecurity situation. "Prudent optimism" was the expression used by the WHO Emergency Director, Michael Ryan, to refer to the evolution of the outbreak.

In recent weeks, the considerable reduction of new cases, especially in the cities of Beni and Butembo, the two main focuses, already pointed to that optimism, although the authorities have chosen not to rush at the time of the epidemic by controlled. "We have confined the virus in a much smaller geographical area, now we must kill it," Ryan insisted during a press conference in Geneva.

The region in which new infections continue to occur is located between the towns of Mambasa, Komanda, Beni and Mandima. "The problem is that the virus has returned to areas where insecurity is very large," Ryan said, referring to the presence of armed groups such as the Mai-Mai that control parts of this territory. Of 207 health areas affected during the peak of the outbreak, it has been passed to only 27. "But the danger has not passed," he said.

On the other hand, WHO also announced that the epidemic response operation will begin to apply a second experimental vaccine in the coming days, a statement expected since Dr. Muyembe took over the national coordination of that response last summer. This second vaccine It has been developed by the pharmaceutical company Johnson & Johnson and will be administered in two doses with an interval of 56 days.

The philosophy of this new tool against the virus is to create a firewall to the extent of Ebola through widespread immunization of the population in areas where the virus is not present today, as is the case of the city of Goma, which He lived his last cases last July.

This second vaccine will coexist with the one that is being used since the beginning of the outbreak, developed by Merck, and that was initially inoculated “in the waist”, that is, only to contacts of infected people, contacts of contacts and health personnel in those health areas where the virus is active, but which since June also began to be implemented geographically. In total, 236,000 people have received immunization.

The Ebola epidemic in the northeast of the DRC is the worst in its history and the second most serious in the world after the one that crossed West Africa in 2014-2016, in which more than 11,000 people died. So far, the Congolese outbreak has caused the spread of 3,207 patients and the death of 2,144. In July, WHO declared the epidemic as a public health emergency of international interest after the virus was taken to Goma because of its risk of regional extension. However, there have only been three cases beyond the borders of the DRC, specifically in Uganda, which have not generated new infections.

Adelina Ibáñez, the promoter of the second trial for the theft of babies, dies without being able to see the accused on the bench