The bill for the lack of rainfall in recent weeks, especially in southern Spain, is beginning to surface. An issue that has already crept onto the agenda of the governmentwhich will meet next Friday, March 4, at the Drought Table while Agriculture Minister Luis Planas proposed in Brussels this week measures such as the advance payment of the CAP (Common Agricultural Policy) and the payment of direct aid. According to a report from UPA (Union of Small Farmers) to which ABC has had access, only in the province of Almería, losses of more than four million euros are already estimated in rainfed crops such as cereals; as well as

in greenhouse fruits and vegetables. In addition to sheep and goat herds. In its analysis, UPA describes the current scenario as "very complicated" and points out that the escalation in production costs will be aggravated by the drought. In addition, they maintain from this agrarian organization that many productions will be reduced, causing a drop in the income of farmers and ranchers.

Many of them find it difficult to pass on these extra costs on stagnant or very low prices at origin. “We have an increase in all production costs. A liter of diesel costs practically twice as much as last year and when you are going to cultivate you need 250 liters for a whole day of tilling," he says. the president of COAG Extremadura, Juan Moreno. In this sense, in the report, it is noted that the lack of water is "almost generalized throughout Spain" although the greatest difference between the current rainfall and that of the previous year occurs in the "southwest of Spain". Specifically, the report dedicates an important space to Andalusia although it mentions other communities such as Extremadura, Aragon, Murcia and Catalonia. 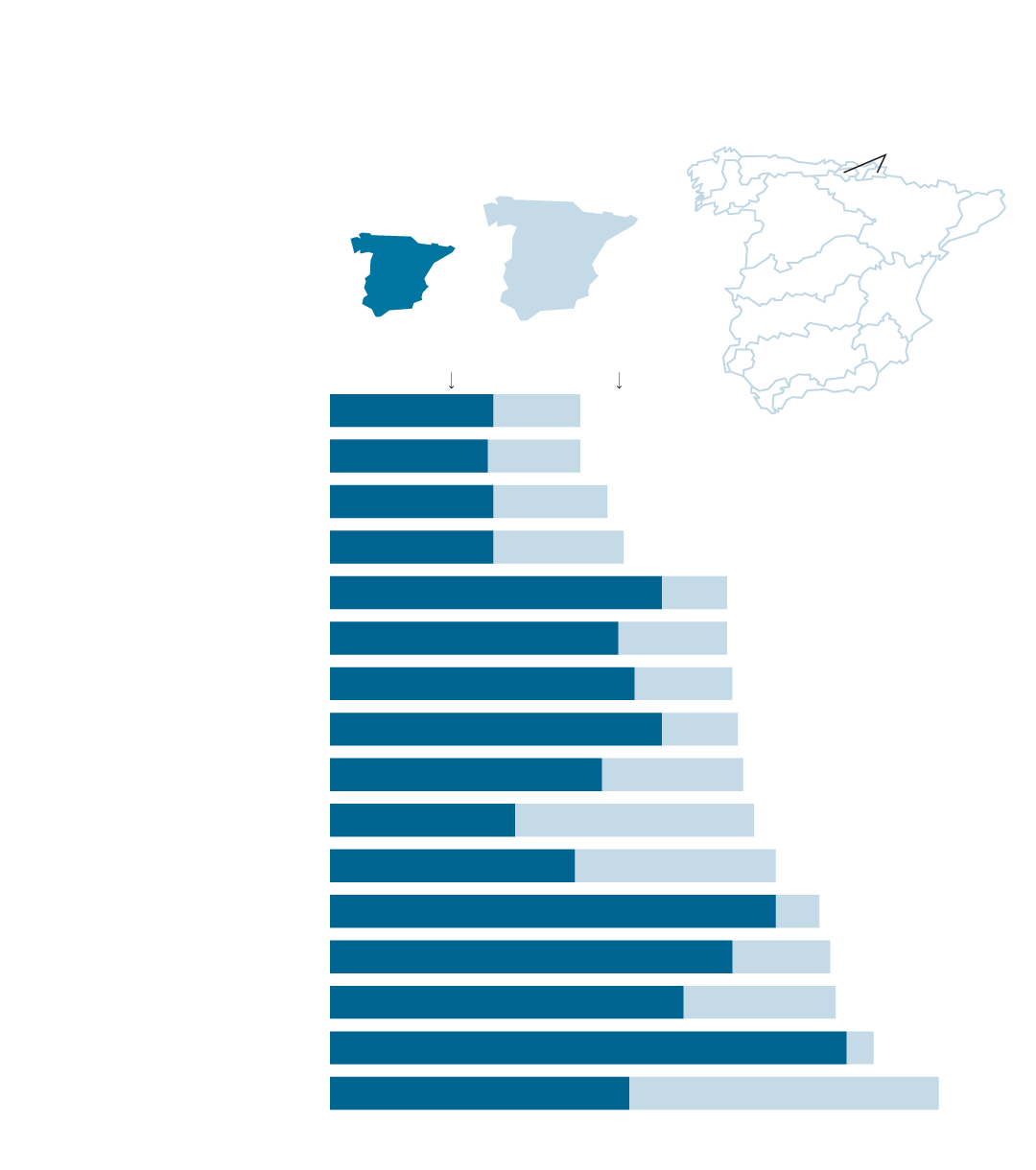 As a percentage of full capacity

average in the last 10 years

As a percentage of full capacity

All of the above will affect both rainfed and irrigated crops and extensive livestock farming due to the lack of pasture. What is already forcing many ranchers to supplement the cattle with increasingly expensive feed. Specifically, they point out from this agrarian organization, that producers will be forced by the lack of water or the reduction in irrigation supplies to plant less water-demanding crops such as cereals, sunflowers or to leave part of the land fallow. On the other hand, in the case of woody crops (olive groves, vineyards, citrus fruits...) the challenge will be to manage the scarce supply of water so that the trees survive. Because, if the average of the water stored in the last 10 years is taken, the provision in basins such as Guadalete and barbate, Guadalquivir, Guadiana and Segura it is around 30% when in the last decade the average is between 46% and 54%. Other more 'generous' ones like the Tagus and the Duero they barely have 45% and 50% of their capacity, respectively. In the average of the last decade it accumulated 76% and 82% of its capacity.

From Sevillesources of Asajarecall that "we have already had five years of rainfall deficit" and recall that in the Guadalquivir Basin (one million hectares) are already three years of irrigation restrictions. Specifically, this year they will have 1,000 cubic meters per hectare, "83% less than the normal allocation for irrigation, which is practically not enough to plant crops." Consequences? For example, only half of the rice has been planted in this province, about 35,000 hectares. Many farmers are also delaying sowing for spring: "The situation is very dramatic in Andalusia and part of Estremadura», they conclude from the main agrarian organization.

A situation that lives very closely Peter Farias, irrigator of this basin, which grows almond and citrus trees that has drip irrigation as well as a well. "I would like to grow cotton," admits Farias, who regrets that the limited availability of water for this year makes it difficult for him and he plans to prioritize the irrigation of the almond trees, leaving the surface fallow. "Of course, I'm not going to plant corn that I planned to plant," admits this farmer, who points out that other colleagues are abandoning crops such as tomatoes. "Without the water that is our engine, agriculture really stops," he concludes.

From Murcia, the head of COAG in this community, Jose Miguel Marin, points out that "the immediate impact will be on rainfed crops - here there are many hectares of almond trees - and, in order of severity, herbaceous crops will be the first to fall (rice, cereals, legumes...)" and acknowledges concern for crops such as olive groves. "The dry land is the main problem and, for the time being, in terms of irrigation, the Segura basin is holding up," says the COAG representative. Along these lines, he also highlights the difficulties of extensive sheep farming. “We have been supplementing with feed for five months,” he laments.