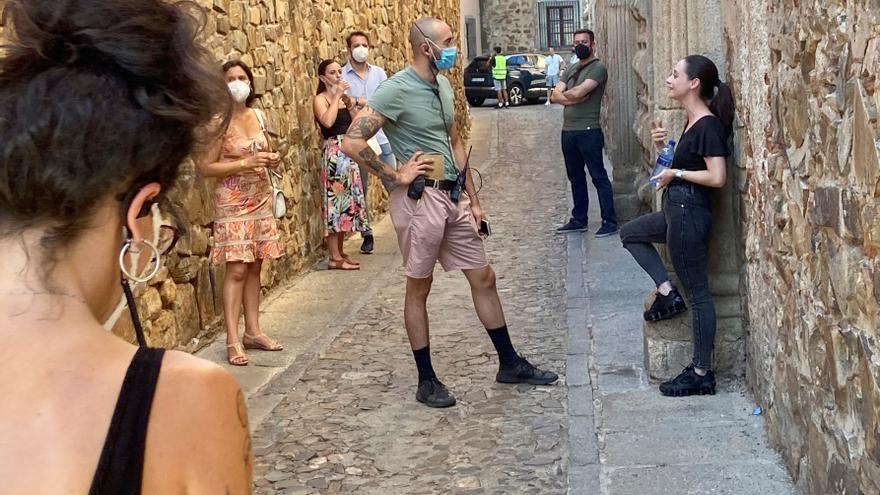 Cáceres, Aug 1 (EFE) .- Historically, Cáceres has been a great film set, thanks in large part to its immaculate old town that lends itself above all to period filming. But it was not only that inert heritage that has attracted a new shoot to the city, but the recurring drought it faces and its cross-border position.

“The heat in Cáceres is an urban legend,” says Jorge Sánchez Gallo, producer of the new TVE thriller “Sequía”, starring Miguel Ángel Muñoz, Elena Rivera, Rodolfo Sancho and Miryam Gallego, who intends to give the genre a twist police and that sets the action in a landscape punished by the absence of water.

The arid picture of Cáceres in the summer is a perfect location for this series, whose filming has been integrated smoothly throughout the week in the city, jumping from the historic center, to the sanctuary of the Virgen de la Montaña, to the area of ​​the Palace of Justice and even the old mining district of Aldea Moret.

A strange but encouraging option for a city accustomed to installing its lights exclusively in its medieval surroundings. This environment that was already discovered decades ago as a first-class setting with high-ranking productions such as “Black Tulip”, starring Alain Delon and Virna Lisi; “The Lords of Steel”, by Paul Verhoeven; and the particular vision of Ridley Scott with “1492: the conquest of paradise”.

Cáceres’ fascination for cinema has given way to the new star format of the audiovisual: series. And with “Game of Thrones” its maximum popularity level was reached. Before, “The Cathedral of the Sea” and “Inés del alma mía”. Then, the series about Hernán Cortés and the defendant José Luis Moreno, with a series in the drawer: “Glow and Darkness” on the life of Francisco de Asís.

Now, TVE (in co-production with its Portuguese counterpart RTP) broadens Cáceres’s scenographic horizon with “Sequía”, an eight-part thriller, which will premiere next season and will also be shot in Lisbon.

It is still paradoxical that fiction unites the two regions at a time when the possibility of recovering the train with Lisbon through Extremadura resonates. Nor is the location of the plot random, in a cross-border space in which Spain manages the water tap through its two Extremaduran reservoirs: Cedillo, located right on the border, and Alcántara.

The director of the series, Joaquín Llamas, highlights that it is “the first current thriller to be shot in a monumental city. It is a great responsibility to portray a modern city within a dystopian environment with a long period of drought ”. Although immediately afterwards he points out: “Well, it’s not that dystopian.”

And it certainly isn’t. All you have to do is look at the rickety Guadiloba reservoir. Cáceres constantly borders on the pre-alert for drought; an evil that drags even in years of hydrological bonanza.

The plot addresses that endemic evil that climate change predicts: a panorama where the decline of swamps is alarming. Some of them were built by flooding towns and expropriating the owners of the houses where they lived. In the fiction, in a town that was underwater and that has emerged practically in its entirety, two corpses appear with clear signs of having been murdered.

In reality, in the province of Cáceres, the drought reveals the Guadalperal dolmen, a megalithic complex located in the floodplain area of ​​the Valdecañas reservoir. And another irony, the town of Granadilla is also located in this province, at the foot of the Gabriel y Galán reservoir, forcibly evicted by the Francoist state in 1964 and never flooded.

A dazzling, almost ghostly (and quite unknown) landscape that attracted an eighty-year-old Pedro Almodóvar, where he shot the end of his film “Átame”. Because Cáceres’ fascination for cinema goes beyond its medieval citadel, a World Heritage Site.