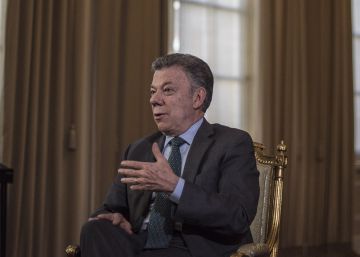 The dream of a lasting peace in Colombia, from a future without weapons or dead, disembark in Mexico this weekend from the hand of one of its architects, former president Juan Manuel Santos, Nobel Prize in 2016. Santos will talk at the Hay Festival de Querétaro with the director of EL PAÍS AMERICA, Javier Moreno, in the framework of the collaboration that this newspaper and the festival have started this year.

In his recent book, The battle for peace, Santos breaks the negotiations between the Colombian Government and the FARC to end decades of conflict; the ups and downs, the pressures, the difficulties. The confidences of the president with his closest, with other leaders of the world. The final signature of a peace agreement. The celebrations. Almost three years after that, the agreement goes through a critical moment and full of news, after the former FARC negotiator in Havana, Iván Márquez, announced last week the return to arms, "a new stage of struggle."

When Santos confirmed his presence in Querétaro, the peace process flowed, not without difficulties, into the narrow channel marked by the new Government, commanded by Ivan Duke, enemy of any agreement with the guerrillas. Beyond his book, his memories, the conversation will turn to the present and the future of an internationally applauded agreement that became unprecedented because of its complexity to end the longest armed conflict in the hemisphere.

The world abandons all predictability. Is the peace process in Colombiabut also the Brexit, Jair Bolsonaro or the victory of Donald Trump... Few people have been able to witness the break from such a privileged place as Ben Rhodes, another of the stars invited to the festival. Speech editor and deputy security advisor to Barack Obama, Rhodes was something like the semantic shadow of the first black president in the history of the United States. For eight years, Rhodes traveled with Obama, talked with him, witnessed key scenes from his governments, such as the operation that ended Osama Bin Laden.

Rhodes presents his book in Querétaro. Its titled The World as it is. One of the juiciest sections - and it's not that the operation against Bin Laden isn't- picks up the author's conversations with the president after Trump's victory. It is not only the horror of what is coming, but the mistakes themselves, a reflection that somehow sums up the spirit of the work: how bad did we do to win such a man?

And from Obama to Trump from the study of a motto, the America First. If the world has changed and history defeated the notion of progress, America First, Trump's battle cry, is one of its symbols, a colloquial version of post-truth. The academic Sarah Churchwell arrive at Hay to present Behold, America, The Entangled History of 'America First' and 'the American Dream', something like Observe, America, the tangled history of America First and the American Dream. Churchwell travels between the two slogans, one, the most conservative emblem of the United States, not only since Trump, but long before; another, the symbol of hope, progress before dynamite.

In a changing world, the powerful voice of two young women fighting for ideas away from the mainstream will gain strength in Querétaro with the presence of Yásnaya Elena Aguilar and Katherena Vermette, double, Friday morning and afternoon. Oaxaqueña, feminist, defender of her language, Ayujk, and the customs of her people, Aguilar is one of the most innovative voices of the essay in Mexico. Vermette descends from the Mohawk and Tuscarora communities in Canada and is a poet and novelist.

EL PAÍS will be present in Querétaro with a large presence of journalists. Jacobo García and Elena Reina, from the delegation of Mexico, along with Óscar Martínez, a reporter from El Faro, will talk with the journalist and writer Jon Lee Anderson about the project that both media develop to count the southern border of Mexico; Javier Lafuente, correspondent for EL PAÍS in Mexico will talk with Yuri Herrera about the new book by the Mexican writer, The fire of the mine of the board; The reporter Pablo Ferri, also from the Mexico Editorial The troop, the book he has written with Daniela Rea. In addition, Pablo Ordaz, a reporter for EL PAÍS and who was a correspondent in Mexico, will talk with the judge Baltasar Garzón, one of the guest stars of Hay.