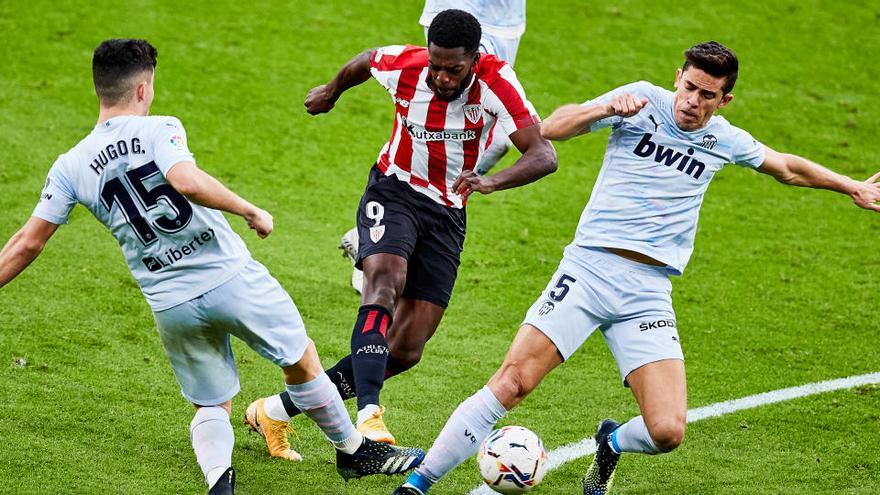 The Athletic and the Valencia they signed draw in a match in San Mamés in which no one was happy With the result, the local team went ahead with an own goal by Hugo Guillamón and could have scored 2-0 and the visitor because he dreamed of the comeback after Gabriel Paulista’s 1-1.

Although in the end the tie has allowed both teams move up positions in the table, Athletic from the eleventh to the tenth and Valencia, one point behind the ‘lions’, from the fourteenth to the twelfth.

Was a tedious and boring match in a first half that ended with Guillamón’s unfortunate goal after riding and Jon Morcillo’s center on the left wing. Much more entertaining and offensive was the second half, in which the Basque team enjoyed chances to achieve 2-0, especially a clamorous one by Oihan Sancet to which Jaume Domènech responded impressively, and Valencia were even able to come back after the 1-1 that Paulista scored in an impressive header.

The two teams noticed the numerous casualties with which they appeared in a match to which Athletic also arrived very worn after the cup clash last Thursday at Villamarín with extra time and penalties. Even so the ‘lions’ started better, but Berenguer was not fine to take advantage of Valencia’s initial doubts, especially a play after two minutes of play in which he stood in the area with options. But his shot -or his center, which was not clear-, was lost very crossed.

The whole che was rebuilt, with Racic commanding in the center of the field and finding depth on the right wing with the side Correia. Two good balls put the Portuguese to Maxi Gómez, but the Uruguayan, rare thing, lacked success. Before, Maxi had already wasted a good pass from Vallejo’s spur in the small area.

He followed the crash down a nondescript road with local dominance, but what accelerated him were the visiting arrivals, although not many nor dangerous. Like a shot by Gayà at the near post when the play called for a cross or a strong shot in a good position from Guedes on the front that went to the stands.

And when it seemed that the rest would be better for Athletic, who was noticing the losses of Muniain, Raúl García and Villalibre, the goal that opened the scoring arrived. It was in a counter mounted by the goalkeeper Unai Símon launching the young Morcillo, who crossed the entire field with his long stride to center looking for Williams at the far post. Jaume did not reach that ball, but he did Guillamón, although with the bad luck of clearing towards his own goal. It was one of the few shots between the three suits in the first half.

As encouraged by that undeserved advantage at halftime, Athletic started the second half much better and generated up to three clear scoring chances in seven minutes. The third unbeatable. A point-blank shot after controlling Sancet who Jaume answered with a sublime intervention in which he still had to remove the ball from Morcillo’s head in the rebound. It was a good play down the left by Williams, who crossed Sancet.

Before, Williams himself had had a first chance on another good diagonal down the left that ended in a corner; and Vencedor a second in a good header, to the center of Morcillo, which was marked off. But Valencia reacted and also chained three occasions the Gol. The first two, a header from Wass to the center of Gayà and a volley from Correia to the center of Soler.

In the third, he tied. Another center from Soler, from a corner kick, which the Sao Paulo center-back housed below and next to the post in a great header from the penalty spot. From there, with several changes in the two teams, a give and take with good chances for Dani García, Williams and Cutrone that none of them knew how to manage as the free balls that came to them demanded.

Incidents: Match of day 22 played in San Mamés behind closed doors. The Athletic players wore a black armband in memory of former rojiblanco player Fernando Elguea, who died this Sunday at age 84 and treasurer of the Veterans Association for more than three decades.