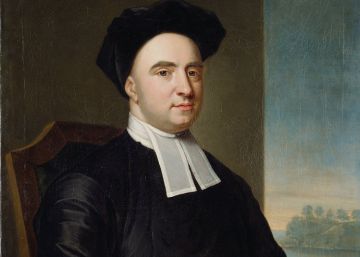 In one of his most famous phrases, Heraclitus stated that the Sun is the size of a foot. Surely he deduced it lying down at dawn, raising his limb towards the star and checking that, indeed, the diameter of the Sun coincided with his foot. In time, Descartes would refute Heraclitus and today astronomers assure us that the Sun has a radius of almost 700,000 kilometers, which is equivalent to two million feet of Heraclitus, on the assumption (nobody imagines that of Ephesus short) that he used a good size. However, there are philosophers who continue to believe Heraclitus and that, seen what is seen, the Sun measures one foot. Among them was one especially audacious, an Irishman from Kilkenny who was born in the century of Cromwell's bloody reconquest and who claimed his whole life as an Irishman. George Berkeley (1685-1753) not only faced the political abuses of the Westminster Parliament, but also the philosophical ones of Locke (friend and advisor to the king) and Newton (head of the Mint).

The Irish are distinguished from the English in temperament, pigmentation, and language. They are passionate and emotional, gifted for poetry and music. The British consider their land wild and hostile, populated by barbarians too reckless and melancholic. Berkeley was a mixture of both. He inherited from his mother his love of adventure and reverie (he traveled through Italy, France and Spain, and entered the ocean to the New World) and from his father the pragmatism of social life.

The life of the mind follows certain stages. In a first phase the embryo only experiences tactile and auditory impressions. It is followed by the gustatory and olfactory and, finally, when the uterus is left, the visual. To see it takes a certain distance. The visual impression is the last, but it ends up becoming the most important. Dreams, memories, waking and imagination are combinations of images. There is something in the mind that is in charge of spinning these impressions, of relating one to another, of weaving a tapestry of associations. Living is learning to infer some impressions from others. In the wet street at dawn "we see" the night rain. And that ability to spin we call understanding.

Berkeley notices all this very early. He calls it the "new beginning" and observes that he must start there. The idea is not new, it has already been considered by Greek and Indian skeptics. The world is not made of things, as the corpuscular philosophers (whose fashion Robert Boyle spearheads) argue; the world is made of impressions. The Irishman maintains that to be is to perceive and in doing so he unknowingly becomes the first European Buddhist philosopher, when Europe has not yet discovered Buddhism. His critique of abstractions becomes a praise of attention, of light and sounds, of perception as true appearance. The senses are not deceived, the mind is deceiving, which is the one that makes inferences, which is the one that must choose between one sense or another, between sight, touch or hearing. For Berkeley, sensations are not duplicates of things, they are the things themselves. The roughness of the paper or the black imprint of these words has no other reality than the mind that perceives them. Subject and object merge and the mind does not seem to exist inside the head, but outside it, in the place where the gaze rests. There is no self in front of the world, but a mutual participation of the world and the self, an immersion in the clear water of sensitivity. A world in which distances are colors.

But let's not go so fast. We have said that corpuscular philosophy is in vogue at Trinity College in Dublin, where our philosopher enters at the age of 15. His approach is simple. Everything, any sensation or intuition, must be explained based on the size, mass and movement of some corpuscles (that nobody has seen) and that move in an unlimited void. Any other explanation is outside the realm of science. The world is a complex pool table with balls of different sizes. As the game unfolds, various effects and appearances emerge: smells, tastes, and visual impressions whose explanation must be sought in said collisions. The mechanical choreography of the atoms produces the sensations. Even gravity or magnetism, which seem to act at a distance, must be explained mechanically. So the most illustrious men of science in England say. So Voltaire believes, who believes few things. The explanation is legitimate if it is mechanical. And Berkeley wonders: what kind of collisions would explain the taste of an apple? Or how to divide a smell? Or how much does the impression of a melody weigh? Colors and flavors become appearances produced by imperceptible beings (although solid and compact) that constitute the only real thing. How has this reversal of common sense been done? Isn't there a usurpation of experience here? The new scientists prefer to experiment with mice to do it with themselves, they live as foreigners in their own country. The inalienable qualities (which they call primary) cannot be solidity, impenetrability or movement, the inalienable (which they call secondary) are colors, melodies, cold and heat, joys and sorrows and, finally, everything that we experience in our own flesh. What do we know about the impenetrability of these creatures that no one has seen? Why call primary what is but an elusive conjecture? The corpuscular philosophy reverses common sense and is anything but empirical: it falls into the contradiction of starting with the imperceptible: the insensitive and compact atom.

To counter the British fashion, Berkeley writes a bold essay where he exposes a new theory of vision. The idea is that the colors, which are the object of vision, are not outside the mind. We see figures, distances, movements, but they are all just variations of color. This allows us to define distance (the Cartesian “extension”) as the transition from the visual to the tactile. Experience teaches that certain tactile impressions are associated with visual ones. We observe an object, we perceive a certain shape and color and we know that if we get closer, we will be affected by such or such tactile impressions. The vision is the prelude to the affectionate embrace, the conquest of a summit or the run over of a carriage, all of them tactile experiences. The amazing thing for Berkeley is that there is no necessary connection between visible and tangible impressions. Each sense is a world unto itself. All we can say is that the visible impression suggests the tangible impression. The first is mediator, the second immediate.

Without knowing it, he was the first European Buddhist philosopher, when Europe had not yet discovered Buddhism

With all this approach, space becomes a tactile affair. It is touch, and not sight, that makes us believe in the outside world. And that belief in the external is based on the fact that the tangible magnitude of objects (as opposed to the visual) remains constant. To them is added an important factor: survival. Both humans and animals consider surrounding objects based on their willingness to benefit or harm them, to produce pleasure or pain. Sight anticipates the benefit or harm of contact with other objects, essential for the preservation of life. But the external world that touch suggests does not necessarily imply that it is not mental (tactile sensation is). However, what will decide our destiny as a civilization is the split between primary and secondary qualities, which will determine the way of doing science. When Berkeley affirms that the world is made of sounds and colors, what he is proposing is an unrestricted humanism. What corpusculars call matter is but an illusion of intelligence. No way to find what we call "objective world" outside the realm of the mind. The mind is that sixth sense that decides which sense to listen to.

Berkeley was the only philosopher of his time who objected to Newton. He anticipated a conception of space more in tune with quantum theory and general relativity. His proposal would be confirmed by Niels Bohr's interpretation of the role that attention plays in experimental work. Shortly before, the special theory of relativity had disproved Newtonian mechanism (or if you will, it had relocated it). The properties that mechanics attributed to matter, space or time, must be understood with relativity as relationships between events and coordinate systems, relationships that change as the movement (perspective, again attention) of these systems changes. However, in the realm of philosophy, Berkeley's critique of Newtonian cosmology failed. Mechanism remained the profession of faith of physicists and biologists throughout the 19th century and remains so today. For many educated people the world is still made up of atoms, particles and planets, rather than sensations.

William James argued that contemplative individuals, dominated by the sense of sight, tended to idealism and relativism. While those dominated by touch, leaned towards materialism, which explains things through impacts or interactions. The temperament influences the philosophy of each one and the choice of a different sense ends up being a matter of passion. Heraclitus's sun, the size of his foot, is a truth of sight, while the sun of two million feet is a truth of touch (although no one has set foot on that fire). That simple decision decides the fate of a civilization. Berkeley was at a crossroads, but his proposal failed. For Buddhism, the transit of death supposes a shedding of touch, taste and smell, and a consolidation of the visual and auditory. Hence the importance that this tradition gives to the exercise of visual and auditory attention that, like life itself or freedom, is only deserved by those who know how to conquer it every day. To attend to the living means to be filled with life. That was the great teaching of the Irishman. It wouldn't be a bad idea to get it back.