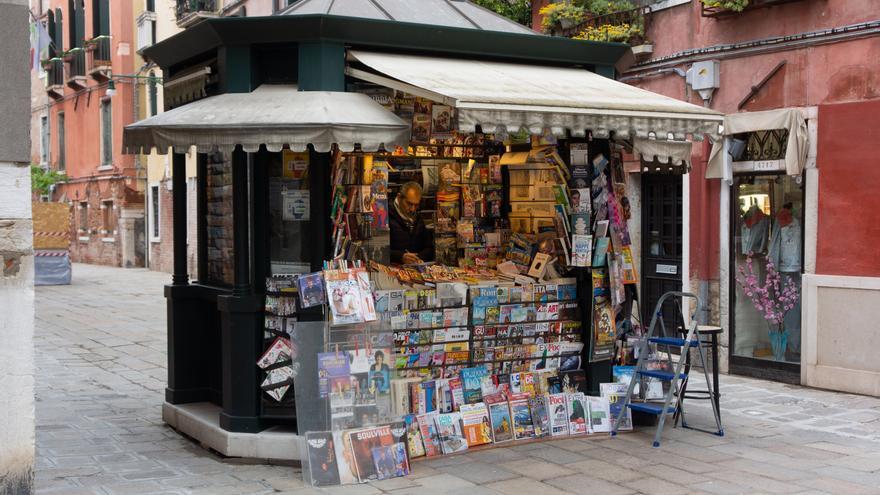 It is a fact that the arrival of the Internet has brought us information in real time, without filters or intermediaries. However, the grammatical poverty with which most of the information is written reminds us that syntax is one of the foundations of journalistic ethics.

Because there was a time, to which I belong, when written journalism consisted of reworking a reality that always arrived falsified in the newsrooms. And causing the grammatical lightning was the way to reliably transmit the storm of data. There was no other.

For this very reason, newsstands were the natural shelter of literature. I remember that we crowded around them to breakfast on the fresh ink of a first page. Together with those newspapers of that time, of which only a couple of headers remain alive today, an explosion of color found its place in the street. They were the comics that were already beginning to be called comics and that told everyday stories where the leading role was played by characters who were children of an era where everything was possible.

Amarcoma, the transsexual detective from Nazario, Slober from Ceesepe, Peter Pank from Max, or Makoki, from Miguel Gallardo and Juanito Mediavilla, were our neighborhood heroes. Today they are part of the imagination of those kids who, like me, scratched their pockets every first of the month to live new adventures of their favorite characters.

The publications in which they appeared were included in a vignette style that was defined as “Línea chunga” as opposed to the “Línea clearly” of publications such as El Cairo, which is more European. The "Línea chunga" was inspired by the American underground, Robert Crumb, the Freak Brothers, Fritz the cat and all that gang whose comic strips strictly adhered to the slogan of those years, that is, sex, drugs and Rock'n Roll, but Iberian plan.

A few days ago Miguel Gallardo passed away, and with such sad news, memories of when I lived in Madrid came to the kiosk to buy El Víbora, where I met Makoki in his “Fuga en la Modelo”. From the first panel I became friends with that guy who fled from an insane asylum who wore skirts and an electro-shock helmet with loose wires. The Barcelona of the suburbs, where the Olympic design had not yet arrived, was the stage that Makoki kicked off with La Basca, a unique gang made up of guys like Tío Emo, el Cuco or el Morgan. Then there were the bad guys, the people of order represented by Buitre Buitraker, Inspector Pectol or Commissioner Loperena.

Those characters nurtured my wildest years, when joints, litronas and that deadly line that separated the living from those who are no longer alive. I keep the memory, with it the tangible reality of those comics that I have been carrying in each move, as if getting rid of them would have meant breaching my part of the deal with the kid that I once was. I also keep the Paraíso album that gives color to the room from where I type these lines, and where Makoki comes out, pissed off and challenging, carrying a knife in one hand and a bottle neck in the other.

Memory discards what it wants to forget and there are things that my memory does not forget. The kiosks are no longer the same as then. Us neither. The news of Miguel Gallardo's death reached me in real time, written with the coldness of a teletype. That is why I have taken it as something personal, and here I rework it and falsify it with pieces of my memory. We already know that you can lie in many ways, and that the most disgusting of all is to tell the truth.