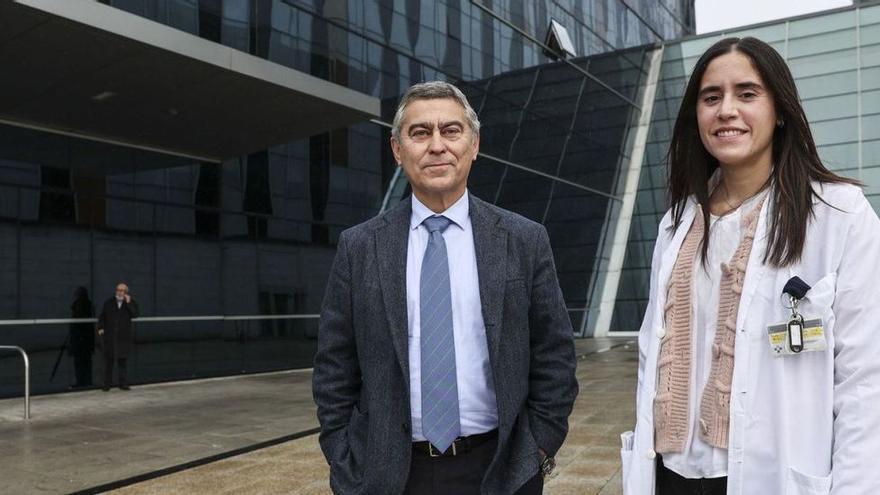 Carmen Fernandez-Cedron Bermejo he's overexerting himself. To her care work, as a doctor in the third year of residency at the HUCA ENT service, add now the doctorate. "Here," he says, "a lot of research is done and I wanted to be like them." They are, among others, José Luis Llorente Pendás, Head of Otorhinolaryngology at the Central University Hospital of Asturias, and Mario Hermsen, an ISPA researcher. Both direct the thesis. “It is true that there is already a dynamic in the service, the road has been paved and we always have doctoral students. Doing a thesis is an opportunity”, says Llorente, who is also a professor at the University of Oviedo and Dean of the Faculty of Medicine. What research gives a specialist is knowledge about the language of the science and also opens the door to an academic career”, adds.

Fernández- Cedrón, a 27-year-old from Leon, who has been in Oviedo since she was 18, spends evenings and weekends, as long as he doesn't have guards, cancer study. Specifically, nanosinusal tumors –including the nostrils and paranasal sinuses– and the ear. The springboard to this field of research was given by the master's degree in Biomedicine and Molecular Oncology at the University of Oviedo, where he carried out work precisely on tumors of the nose. This type of cancer, explains José Luis Llorente Pendás, is "rare", due to its low prevalence and mainly affects people who work with wood, "but it has great social and labor importance". The HUCA Otolaryngology service, made up of almost twenty doctors, It is a national benchmark in this area and since the 1990s it has dealt with around 300 cases. This is a much higher figure than that recorded in other hospitals in the country. Hence the interest of Llorente's team in studying these tumors and giving hope to their patients.

What is the contribution of Carmen Fernández-Cedrón? Find the best model to perform liquid biopsy. That is, a test that allows detecting tumor components in the blood. "This would serve us both for the initial diagnosis and once the patients are treated or operated on to verify that the cancer has recurred or not," explains the young woman. Right now, she is waiting for results from a laboratory in the Netherlands, which is in charge of the sequencing process. The other tumor under study, that of the ear, is also rare and Carmen Fernández- Cedrón try to find molecular markers for him that can predict his aggressiveness or the possibility of targeted treatments, what is known as precision medicine. "Here we analyze the tumor directly -not the blood, unlike the previous one-, we also carry out sequencing work and, finally, immunohistochemistry -consists of detecting, amplifying and making a protein visible-", he details. In this sense, the colleagues from the HUCA Otorhinolaryngology service and Mario Hermsen have managed to develop a cell line; said colloquially, an "immortal tumor", very useful for laboratory tests. “This has rarely been achieved or it may even be the first time”, celebrates Jose Luis Llorente.

This immortal tumor “will help us to test drugs. If we add one to it and see that it grows, it is because it does not work as an inhibitor. If we use another one and it stops growing, then it has possibilities and requires more studies. All of this, of course, is done at the moment in vitro,” he adds. Obtaining the cell line was not an easy job, since it required trying many times without success. Carmen Fernández-Cedrón also warns that "no cancer is the same as another", that is why we must advance in precision medicine. “This is like brothers. Even if you have ten, none is equal to another. Each must be treated differently.”, Llorente abounds.

The Leonese confesses that she chose the medical specialty of Otorhinolaryngology three years ago almost by chance. “I had never thought about it in my life. I had to rotate in this service during the race and I said to myself: why not? What I like about this specialty is that it is very varied, it has very wide age ranges and you combine consultation with the operating room”, she explains. The investigation supposes an extra work, but necessary. “Learning scientific methodology seems fundamental to me. The doctorate gives me training, understanding the mechanisms of tumors, why some are treated in one way and others in another, why some end up being cured and others not...”, she expresses. In short, it is about understanding all the work that she develops at a clinical level.

The Leonese doctor will finish her residency at the HUCA next year without having a very clear future. He says that staying in Asturias is an option, although his land also pulls him, after nine years away from home. What he does have clear is one thing: “When you get into medicine, you do it for care work. But I wouldn't want to lose this: the investigation." The doctoral student does science thanks to the funding raised by her team. “The function of the director is also to get money. Now I am already looking for the following doctoral students”, says José Luis Llorente.

What does he investigate?

Carmen Fernández- Cedrón has two open lines. On the one hand, to find the best model to perform liquid (blood) biopsies for nanosinusal tumors (of the nose and paranasal sinuses). And on the other, look for molecular markers that detect ear tumors. The HUCA Otolaryngology service has recently managed to take a big step, obtaining a cell line, that is, an “immortal tumor”, which allows scientists to carry out various tests in the laboratory.

Because it is important?

Because the two cancers affect few people, and therefore less progress has been made in prevention and detection than in other more prevalent diseases. However, it has a great impact in terms of sequels and survival.

How is it financed?

Through the money generated by the research group itself by obtaining competitive scholarships. In addition, Fernández-Cedrón works as a doctor at HUCA. He is in his third year of residency.