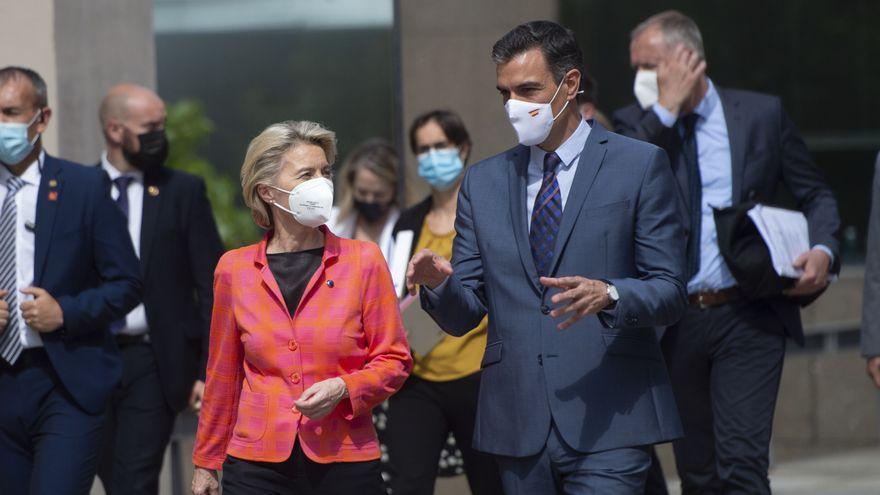 The PP has launched an offensive against the distribution of European funds that the government has launched. The autonomous communities governed by those of Pablo Casado have announced that they will appeal to the Supreme Court the execution of one of the employment programs, of just nine million euros of the 24,190 million that have been budgeted. Also the municipalities of the PP will take to the FEMP what they consider an unfair treatment. But the numbers are not so clear. Four of the six regions that receive the most funds are governed by the PP. And the six that they control add up to 44.1% of the 11,247 million euros already distributed among the autonomies.

Andalusia is the autonomous community that has benefited the most so far in the distribution. The region chaired by Juan Manuel Moreno has received 1,921 million euros from European funds. The second is Catalonia (1,578 million), followed by Madrid (1,213 million euros) and Comunitat Valenciana (1,054). The fifth and sixth are Castilla y León (742 million) and Galicia (681). Of these six, except Catalonia and the Valencian Community, the rest are governed by the PP. Further back are Murcia (number 12, with 339 million) and Ceuta, with just under 20 million.

In total, the six autonomous administrations governed by the PP have already received around 5,000 million euros, 44.1% of the total transferred by the Government. The distribution in the first autonomies has a clear population component. The first four are also the most populated, while Galicia and Castilla y León have the order exchanged. Thus, the six controlled by the PP house 46.3% of the total inhabitants of the country.

Despite these data, Casado has cast doubt on the reliability of the distribution of funds and has already insinuated on several occasions that the system designed by the Executive may end in cases of "corruption". The last one, this same Tuesday in a conference that he gave before the main businessmen of the tourism sector, one of the most in need of this money. Casado has insistently claimed to participate in the design of the fund distribution plan with the creation of an independent authority in which private capital has a place.

Faced with this offensive, the PSOE has raised its tone against Casado, whom it accuses of being in the "boycott" of European funds. “The thief believes that everyone is of his condition,” said the spokesman, Felipe Sicilia, on Monday, due to the doubts that the PP is sowing about the distribution of funds that will mean an injection of 140,000 million in transfers and loans in the coming years .

The Government also assures that the control by Brussels is "exhaustive" and that the three-level plan is established in the mechanism itself: a computer system with which the European Commission can monitor in real time the tenders, the legal services of the State and the audits. In addition, in Moncloa they remember that the criteria for the distribution of the funds have been approved unanimously in 59 sectoral conferences in which the autonomous communities are represented.

The complaint of the PP does not stay in the regional sphere. Part of the money received by the regions is in turn used to pay for certain city council plans. The complaint made by the mayors of the PP is that in the communities governed by the PSOE, their local administrations receive less funds than they should. Something that, they say, does not happen in reverse.

The mayor of Zaragoza, Jorge Azcón, has been one of the most active in the complaint, which has focused on a call for support to the commercial sector (endowed with 103 million) and another on tourism (660 million).

In the first, always according to the data of the PP, 53 local administrations of the PSOE have received funds for only 23 of their party. For its part, of the 67 projects of the Popular Party communities, a total of 22 are piloted by the PSOE. In hard cash, the PSOE administrations have received 49.7 million and those of the PP, 31.8. As for the funds for tourism, of the 52 projects that will receive funds from the communities governed by the PSOE, six are from PP municipalities.

The detailed data of the rest of the programs are not broken down by parties, but these two examples are enough for the PP, which, in addition to resorting to the courts, will take what it considers a grievance to the institutions. The Minister of Industry, Commerce and Tourism, Reyes Maroto, recalled, for her part, that the city council is, with 11.25 million euros, the largest beneficiary of the 103.2 million euros earmarked for aid for the strengthening of commercial activity in areas of great tourist influx and that the PP denounces has gone to a large extent to the socialist town halls.

The result of the 2019 elections meant that 2,829 municipalities have a municipal government headed by the PP, while 2,780 have a PSOE mayor. The figures change notably when referring to its population. Considering this factor, the Socialists run the municipal governments of 19,584,052 Spaniards compared to the 12,820,119 led by the Popular Party.

The main battle horse for the PP is, for now in court, the distribution of the nine million corresponding to an employment program for vulnerable groups that the Government has distributed for pilot projects in four communities. In total, 320 million will be allocated to make these job placement plans, of which 300 have already been distributed at the sectoral conference with the agreement of the autonomies and 20 were reserved for pilot projects, that is, there are still eleven million left to distribute Government sources point out that "relevant and interesting new ones" proposed by the communities or "scaling up" those that have currently been designated may be chosen.

The Government maintains that in the distribution of these initial nine million, the "experiences" in terms of these labor insertion projects, the execution capacity of the autonomies and the "diversity" of their respective labor markets have been taken into account. . Thus, in Extremadura the agricultural sector has a greater weight; in the Valencian Community, the tourist; in Euskadi the most industrial profile has been sought and in Navarra the project is destined for an uninhabited area of ​​the Pyrenees, according to government sources. What they admit in the Government is that the evaluation criteria of the technical committee on which that decision is based are not public.

These sources acknowledge that the European Commission has been interested in the controversy caused by the PP: “The level of concern about the news and lawsuits is zero. In Spain, the judges will decide and we will respect it; but the concern of the European Commission is zero. They know that no funds have been misappropriated, all milestones and objectives are being met.”

In the Executive they also show their perplexity because the PP has put the employment program in the trigger compared to other similar ones, such as that of the Ministry of Social Security and Inclusion, with which 109 million will be distributed among the communities for related policies with the Minimum Vital Income and whose procedure is similar: "The promotion of pilot projects with administrations and social entities (...) that will allow the dissemination of practices that have had better results", according to the department of José Luis Escrivá. Galicia or the Madrid City Council are among the main recipients of these funds.