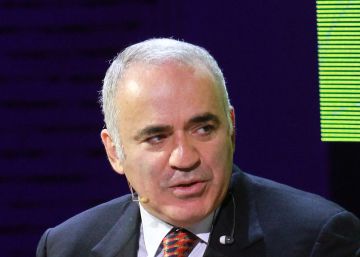 To former chess world champion Gari Kasparov it still stings: "It was not the first game I lost against a machine. It was the first game I lost," he says. In 1997 Deep blue, from IBM, won the current chess champion, who had been unbeaten for 12 years. "The first weeks were very hard," he says. "I was the first intellectual worker painfully defeated by a machine in front of everyone." Kasparov admits that he lost not because of the brilliance of Deep blue, but for its consistency. He made fewer mistakes. Kasparov asked for a third competition – in the first in 1996 he had won the human – but IBM refused: "It was a wise strategic decision," says Kasparov.

Luckily for Kasparov, it was not a unique case. That distance has only grown: "The distance between the current chess champion, Magnus Carlsen, and the machines is bigger than between Usain Bolt and a Ferrari. "

Kasparov has become today a evangelist of the future of artificial intelligence and collaboration between man and machine. This lesson about the goodness of the future has been given in the first edition of Onlife, a meeting organized in Milan by the newspaper The Repubblica with the collaboration of Lena, an association of European newspapers to which EL PAÍS belongs. Onlife it is a neologism invented by the Italian philosopher Luciano Floridi that means that space where "there is no real difference between being on-line Y offline, and that is a large hybrid area, renamed as onlife", according to Carlo Verdelli, director of The Repubblica

During the day and a half it has lasted Onlife More than 4,000 people passed through the Parenti Theater and the Polytechnic of Milan to see talks about a future that is increasingly here: "It's a future already present," according to Verdelli. The talks analyzed the challenges of an era in which the promise of liberating technology has become an ambiguous reality. Together with Kásparov, the mayor of Barcelona, ​​Ada Colau, and the mayor of Milan, Giuseppe Sala; the creator of the app Waze that helps prevent traffic jams, Uri Levine; the writers Alessandro Baricco and Roberto Saviano; the mathematician who sent the first data packet online, Leonard Kleinrock, or the author of the germ book The era of surveillance capitalism, Soshana Zuboff.

We complain because we are alive

"Technology is the main reason we are alive to complain about technology," Kasparov joked. His optimism has led him to compare the value of artificial intelligence with that of Steve Jobs, founder of Apple, whose death was eight years old on October 5: "Machines can personalize you and give you what you don't know you want, but they don't know how to give you what doesn't exist yet, as Jobs did. "

Other speakers have been more cautious. One of internet pioneers, Kleinrock, He has admitted that the evolution of the environment has been irregular. In the early years it was difficult to imagine this decline towards a network where the spam, he ransomware, the attacks and the lack of privacy had such a great weight: "In the first 20 years nobody monetized the network and nobody behaved badly," he explained. It was harder for them to predict the decline.

Mayor Colau explained the work of Barcelona during her first term against "bestial gentrification" caused by the Airbnb platform. "The first time we talked to them they told us we couldn't do anything against them, but then we learned," he said.

The objective of the meeting has been to verify how the mutation that society has been experiencing for a few decades is several things at once: a threat, a hope and a mess. All are valid. Some prefer to focus on what is lost, others on what is earned and others still on complexity. "It's a half blessing," said Kleinrock, with the serious knowledge of someone who has been on the front line for 50 years. Maybe that's why he practices a wise dispassion: "It's a new world. Do you want to understand it? Ask your children."