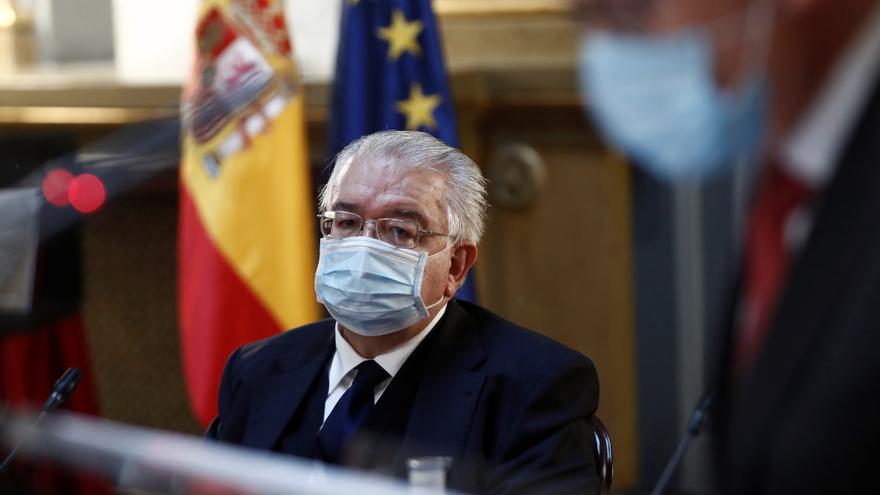 The Constitutional Court rejected last week the legal tool used by the Government to protect measures against the spread of the coronavirus. The court understood that the state of alarm was not adequate for that situation, that it required one of exception. But the sentence was agreed by a margin of only one vote, six to five. Now, the dissenting magistrates, including the president of the Constitutional Court, the conservative Juan José González Rivas, have expressed in particular votes the rejection of the arguments of their colleagues.

The dissenting votes are signed, in addition to González Rivas, by Cándido Conde Pumpido, María Luisa Balaguer, Andrés Ollero and Juan Antonio Xiol, although the content of the latter is not yet known. There is a thread that connects the texts of these magistrates, who coincide in pointing out that the sentence based on the presentation of Pedro González Trevijano failed on three specific points: it did not value the proportionality of the measures approved to protect the lives of Spaniards, it erred in to say that rights were suspended when they were only limited, and is wrong in thinking that the state of alarm, state and siege are progressive depending on the seriousness of the events, when in reality they are designed for different situations.

“None of the fundamental rights have been suspended”

The president of the court, the conservative Juan José González Rivas, begins his vote by stating that in his opinion, the suspension of fundamental rights “only exists when it is formally agreed upon by the public power that has been attributed that power,” and adds that this it did not happen with the declaration of the state of alarm: “It is clear that, in this case, a formal decision of this kind has not been adopted, with which none of the fundamental rights has been suspended in its own sense.”

It argues that the limitation of circulation was always limited to what is established in the Constitution and that right was never completely suspended and criticizes the fact that the majority of the court has not addressed the proportionality of the measure in the ruling. “The Court should have analyzed whether the restrictions on freedom of movement were due to legitimate purposes and if they were directed to them in a necessary and proportionate way,” González Rivas writes.

In addition, the president of the court refers to a part of the parliamentary papers on the State of Alarm Law that Pedro González Trevijano did not reflect in his sentence, and which indicated that this constitutional tool was designed for “health-related circumstances”, “such like epidemics. ” And he adds that during the state of alarm there was a judicial control “that would have disappeared or diminished substantially if the state of exception had been declared.”

The president of the court summarizes his position at the end of his vote. It states that the Government tried to contain a health emergency with “constitutionally admissible” measures that were limited in time, were proportional and responded to scientific criteria; from the first moment life was preserved as a fundamental right – “the massive contagion of a then unknown and fatal disease” was avoided, limiting circulation but “allowing the mobility of people to attend to their basic needs”.

The state of exception is for “public order problems”

In his particular vote, Andrés Ollero criticizes that part of the debate in the Constitutional Court has revolved around whether, due to the events that were being fought, a state of alarm, of exception or even of siege was necessary, as if they were ” a progressive scale “, something that this magistrate does not share. He argues that it is not a function of the rights affected by the situation being faced, because a “pandemic may affect certain facets of the holders of constitutional rights with more intensity than a possible coup d’état or invasion of armored divisions “.

“In those states of exception, fortunately far away, a healthy duplicating machine could turn into a criminal indication. In a – for me, happily, not experienced – state of siege, it seems advisable not to approach the tanks unreasonably. If we forget such elementary features it can make it easy for us to miss, “he adds.

Ollero also recalls that the state of exception cannot be imposed for more than two months, so whoever declared it would have transmitted to the population that the pandemic could be stopped in that limited period of time. “Throughout the development of the state of alarm, a lot of nonsense has been expressed, even by authorized spokesmen, but it is fair to acknowledge that this extreme was not reached.”

He insists in his private opinion that the measures have always been proportional if one takes into account that the purpose to protect was human life and subject to control by the courts. It concludes that the state of exception would have supposed – thought for “problems of public order with notorious political connotations” – would have affected the content of fundamental rights, and that the alarm – which “refers to catastrophes and situations such as the current pandemic” – It can only be considered unconstitutional if the limitations of rights have been disproportionate. Ollero thinks not.

“It generates more legal insecurity than it tries to combat”

María Luisa Balaguer, for her part, regrets that it has not been possible to reach “an acceptable argument for the majority” and criticizes the “extreme polarization” that has occurred in the court. In his opinion, the sentence “generates more legal uncertainty than it tries to combat.” Moreover, he criticizes the “internal noise” generated in the court, which has held, he says, “extra-legal positions that are not very recommendable for the future, in an institution that should only be pronounced through its resolutions.”

“It is difficult to accept as contrary to the Constitution legislation that has allowed, quickly and efficiently, to arbitrate effective social measures in order to protect legal assets as important as the life and health of people, and in a context of identification with the measures of the European environment that have not been discussed, with the degree of intensity that they are in Spain, in their respective states, “says Balaguer.

In addition, it warns that the ruling may lead to “that any declaration of a state of exception that contemplates suspensive measures of rights, approved by the majority of a Chamber, could be considered constitutional,” and charges against the argument that the importance of the facts required a state of exception instead of alarm. He maintains, like Ollero, that they were not conceived to be chosen because of the seriousness of the events, but because of their nature: risk to the constitutional system in the first, health crisis –with shortages–, among other scenarios, in the second.

“The reason for the confinement, and that of other options such as perimeter closures or the curfew, was to avoid exponential contagions, a strictly sanitary measure, therefore, whose sole purpose is to prevent the loss of human life,” writes Balaguer, He adds that in his opinion they were proportionate and difficult to judge now, with much more information than was available then.

These private vows join those of Juan Antonio Xiol and Cándido Conde Pumpido. The latter assured that the sentence declaring confinement illegal “does not resolve, but rather creates a serious political problem, by disarming the State against pandemics, depriving it of the instrument that the law expressly determines to deal with health crises, the state of alarm. “And he added that” a mere argumentative shortcut is used (qualifying as suspension an intense restriction of a fundamental right with a very poor argumentation) to estimate the unconstitutionality of a health measure requested by a political party – in reference to Vox – that it had previously expressly supported in the debate and parliamentary vote on the extension “.