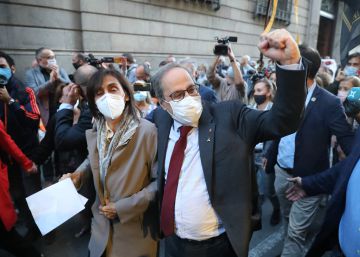 “That today we are not in a position to finish the road to freedom does not mean that this is a step backwards. We independentistas are not afraid of the polls. We will have the opportunity to demonstrate it in an election that will be held in a few months, "said the former president of Catalonia, Quim Torra, yesterday in his first institutional statement after the Supreme Court ruling that disqualified him as president of the Generalitat.

Torra, who did not resign but did consider himself dismissed, received the official notification of the Supreme Court ruling yesterday afternoon confirming his disqualification for disobedience. The former president limited himself to pointing out that he is looking towards elections that will arrive in "the next few months", for which he suggested a single candidacy of pro-independence forces that recovers "the spirit of October 1".

The dismissal of Torra is the first of a Catalan president in office, and opens a new political space in the Generalitat and the rest of Spain, including a new front in the negotiation of the General State Budgets (PGE) that the Executive Central is negotiating, among others, with ERC, one of the parts of the Catalan coalition government, which will be led by Pere Aragonès pending the next steps to be taken in Barcelona.

In recent months, due to the shocks in the strategy for the management of the coronavirus, as well as the respective relations with the central government - including the possibility of giving the green light to the project for public accounts by the Republicans - ERC and Junts per Catalunya (JxCat) have distanced themselves and put the continuity of the coalition Government in check. Yesterday, however, during Torra's appearance, the plenary session of the regional Executive staged a unit that had not been felt for months, equally criticizing the Supreme Court's ruling and calling to "ensure the strongest Government during the interim period caused by a court reckless".

The Criminal Chamber of the Supreme Court confirmed the sentence of a year and a half of disqualification and a fine of 30,000 euros imposed on Torra for a crime of disobedience towards the Central Electoral Board (JEC), which ordered him to remove pro-independence symbols during the electoral period of the April 28, 2019.

During the hearing for the appeal filed by Torra against this conviction before the Supreme Court, held on September 17, the prosecution requested confirmation of the conviction while the defense argued, to request his acquittal, that Torra was treated by the JEC as a "national minority" for "three words on a banner" that should be part of their freedom of expression.

The Supreme Court considers that it repeatedly and stubbornly disobeyed the orders, thus violating the neutrality required of public administrations in those processes. Furthermore, as a lawyer and writer by training, the court understands that Torra has “above average” legal knowledge that allowed him to know that he was violating the order of a higher body.

In its judgment, of which Judge Juan Ramón Berdugo has been a speaker, the Supreme Court emphasizes that the scope of the appeal “is not the display of certain symbols or banners of a certain political option, but their use in electoral periods, disobeying the provisions of the JEC, which, in the exercise of its functions, guarantees the transparency and objectivity of the electoral processes, prohibited their use, in violation of the principle of neutrality to which administrations in general must abide, contrary to express orders of that Electoral Board ”.

The ruling adds that "the Administration's demand for neutrality becomes more acute during electoral periods", and cites its jurisprudence to emphasize that "free suffrage" means "proclaiming as an essential design of true democracy the establishment of an electoral system that guarantees a institutional framework of neutrality ”without interference from any public power.

To rule out the violation of the right to the presumption of innocence, the Supreme Court assumes that Torra “at all times, before, during and after the oral trial, has not denied the display of banners and other symbols in public buildings dependent on the Generalitat , especially on the facade of the Palau, and his refusal to comply with the orders of the JEC ”, although the appellant alleged that they were illegal orders and that they violated his freedom of expression.

The Catalan elections will be held at the earliest on Sunday, February 7, 2021. Following the publication on Tuesday of the dismissal of the already former president, Quim Torra, in the Official State Gazette (BOE) and the Official Gazette of the Generalitat de Catalunya (DOGC ), the electoral calendar will be activated. Thus, tomorrow, the president of the Parliament, Roger Torrent, will start the 10-day period to make a round of contacts with the parliamentary groups to check if there is a candidate with a majority to be invested as president of the Generalitat to replace Torra . The pro-independence parties have already warned that they will not present any names, and the opposition groups do not have a majority to invest in an alternative candidate.

Thus, predictably, Catalonia is heading towards elections that both the PSOE and the PP asked as soon as the Supreme Court's ruling was known yesterday. “This disqualification opens a new time for Catalonia. The call for regional elections must take place as soon as possible that will allow the Catalans to overcome the situation of paralysis and blockade generated by the attitude of the pro-independence parties over the last few months ”, said the president of the PSOE, Cristina Narbona , which also expressed its "respect" for the judiciary.

The leader of the PP, Pablo Casado, assured for his part that "the Government must guarantee compliance with the sentence and public order in Catalonia." From the PP, as they did in Cs and Vox, they also attributed part of the process that has ended with the disqualification of Torra.

From En Comú Podem, however, they described the sentence as "disproportionate", an extreme with which the Minister of Universities of the PSOE Government and United We Can, Manuel Castells, agreed. The CUP, for its part, called on citizens to participate in all the mobilizations against the disqualification of Torra.

The public pension will rise to more than 3,000 euros per month after Escrivá's contributions are unstoppable