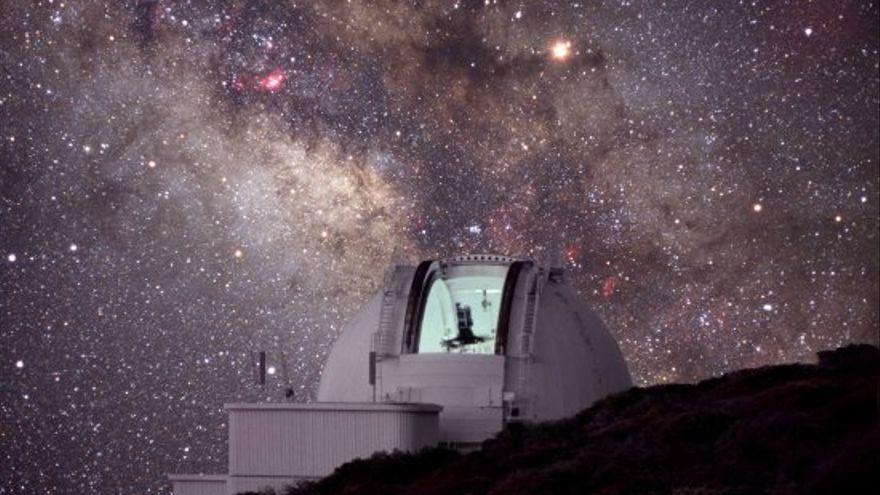 If there is one question that most people shudders, it is the origin of life. Multiple theories have grappled with this question by giving plausible answers and, in several cases, the possibility has been raised that our life is not unique in the vast universe.

Ethanolamine in the Milky Way

Through the use of radio telescopes we can discover molecules in remote areas of the universe. Any wave can interact with atoms and molecules to cause certain changes in them, depending on the energy of the wave in question.

These changes can be observed and played by who is who until you find the chosen molecule. A small example: if someone pushes us, depending on the force with which they do it, we will react in one way or another. Well, a similar thing happens with molecules, only that the push is the wave and the reaction is what these radio telescopes capture.

Víctor M. Rivilla’s group have used radio telescopes IRAM from Pico Veleta (Granada) and from the Yebes Observatory (Guadalajara). This has helped them find ethanolamine in a cloud of molecules called G + 0.693-0.027, near the center of our Milky Way galaxy.

This nice molecule is really simple and therein lies part of its beauty. The ethanolamine it is nothing more than ethanol (2 carbons, 1 oxygen and 6 hydrogens) and an amine (1 nitrogen and 2 hydrogens) united. This makes a molecule of the formula C₂H₇NO, whose importance is due to the presence of nitrogen and oxygen: it is polar.

That one molecule be polar it means that, within it, electrons are not attracted in the same way by some nuclei of atoms as by others. With regard to life it is much easier: polar substances are they get along with water, our universal solvent and the basis of our life.

This molecule does not occur alone in living beings, it is normally linked to other types of biomolecules. Its perfect partner is fatty acids, but to unite with them it needs another molecule: glycerol-3-phosphate.

Let’s say this molecule is like a kind of bridge between ethanolamine and fatty acids. This union (ethanolamine, glycerol-3-phosphate and fatty acids) gives rise to a group of molecules called phospholipids very particular, so much so that these compounds are essential for life as we know it.

Fatty acids, like oil, are long nonpolar (apolar) molecules. Therefore, they do not get along with water (water and oil do not mix, after all).

So, in the case of phospholipids we have a very special situation: fatty acids do not mix with water, as we have said, but ethanolamine does. This allows us to imagine phospholipids as molecules that have a head that interacts with water and some tails fleeing from it.

The interesting phenomenon is that the heads align and the tails also (as in the image). This is neither more nor less than a membrane, the beginning of a cell. This membrane is a kind of enclosed that delimits the cell. Therefore, without ethanolamine, there would be no phospholipids and, without them, there would be no cells and, therefore, life.

The origin of ethanolamine

In many cases it is speculated that, before life existed, the molecules necessary for its origin could have arrived on Earth transported in meteorites. These meteorites would impact our planet and leave those molecules free to combine with others and build the life we ​​know step by step.

In the case of ethanolamine, the authors of this study they believe that a thousand trillion liters of this could have reached Earth in meteorites. Therefore, ethanolamine on Earth was alien millions of years ago and, thanks to this fact, it was available to form new molecules.

Once again, as Carl Sagan made us think, we are children of the stars and of the universe. A part of us comes from outside the Earth, from places that we still do not know.

Understand how these are formed seeds of life in space is key to understanding the origin of life, as Rivilla says. This thought sows us the doubt as to whether we are alone in the universe, if we are the only life that exists. This idea has been explored several times by researcher Carlos Briones. Specifically, in this interview talks about the possibility of finding life outside in space.

Perhaps you have to start thinking about the possibility that Briones says: “Maybe the Cosmos is full of life.” It may be that, in part, it is due to these molecules present throughout the universe.

This article was originally published on The Conversation. You can read it here.