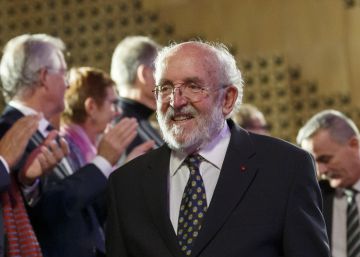 This year's Nobel Prizes are full of journalistic interest. They deal with the lithium-ion batteries that have revolutionized the world by sneaking into our pockets in the form of a mobile phone, and the electric cars in which we put our most dreamy lung hopes. They also speak of the molecular language that allows us to breathe oxygen – a product of the bacteria that populated the Earth exclusively during the middle of its history – and that therefore has driven our evolution and allows us to stay alive right now. They tell the recent and remote history of life. But the matter nobel that has swept this week in MateriaWith 2,700 comments as I write, it has nothing to do with all that. Its titled There is no place for God in the universe.

Who pronounces that phrase is Michel Mayor, co-discoverer of extrasolar planets and brand new Nobel Prize in physics. A discoverer of worlds. Bruno, Kepler and Galileo have imagined centuries ago those worlds and their profound consequences for our position in the cosmos, but Major is the first Homo sapiens who has seen them, who has definitively demonstrated them for the history of knowledge. Thanks to him and his colleagues, we know today that there are billions of planets out there, and that is only within the confines of our galaxy, the Milky Way. Under these conditions, I do not believe that you can prevent your mind from traveling to deep space, perceiving not only with mathematics, but also with poetic emotion, our rare and precious position in the cosmos. The mere doubt of whether we are alone in this endless universe leads to the mind by dizzying highways that we do not even know how to map on our GPS.

There is no place for God in the universe. The phrase can be considered an equation – or even a verse – that summarizes the history of science. Physics has stripped us of our supposed particularity in the cosmos, since Copernicus expelled us from paradise by revealing that Earth was one more of the planets, of those tiny pearls that move through the sunset sky before our astonished eyes. And that was just the beginning. Today we know that we are a vulgar planet that revolves on a bland star of the hundreds of billions that make up the Milky Way, which in turn reveals itself as an ordinary galaxy among the hundreds of billions of galaxies in the visible universe, and let's not talk about the invisible universe or the parallel worlds anymore.