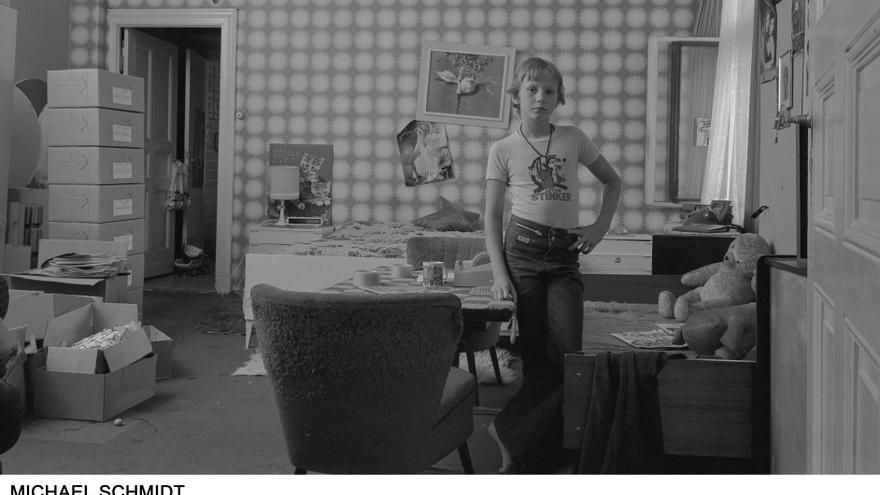 The chromatic contrast that exists between the first photographs of the German Michael Schmidt and the last ones is striking. Over five decades, Schmidt traced the footprints of contemporary society, interspersing snapshots of the urban landscape and its inhabitants in series such as Kreuzberg (1969-1973), Wedding (1976-1978) or Berlin nach 1945. In the former, the powerful black and white stands out, although really as Smichdt stated during his life: “Black and white are always the lightest gray and the darkest gray”; and in the last, of the series foodstuff, the ultra-processed green apples that almost appear to be digitally designed, or the plastic pink of cut meat. For Thomas Weski, curator of the exhibition that the Reina Sofia Museum has just opened with more than three hundred works, “Schmidt covers the most relevant topics of his time and of our time: from the role that each person assumes in society to the ‘inhospitality of our cities'”. “Also the way in which we deal with our historical legacy and our way of consuming goods and what this does to our environment,” he explains to this newspaper.

Born in East Berlin but raised in the West, Michael Schmidt spent his life wandering the streets of the divided city. First, at the insistence of his parents, as a police officer, and then, from 1965, as a photographer. There is something of the History of Germany in the 20th century in that intrahistory of Schmidt, of that man who sees a camera in a colleague’s locker and decides that art is a nobler way of doing justice. Self-taught always bent on Berlin, taking his pulse and perceiving almost intuitively the changes that were coming in a divided and pierced city. A city that he never left until his death in 2014. This voluminous retrospective exhibition is the first to be held after his death.

In 1976, the photographer founded the Werkstatt für Fotographie (Photography Workshop), a leading school and gallery that brought American innovations to fine art photography in Germany. Schmidt was undoubtedly a fundamental figure in the rebirth of the city of Berlin as an artistic center.

His work from the 60s and 70s were commissioned by local administrations. It captured and described the destroyed neighborhoods of West Berlin. Schmidt goes far beyond documentary work. In this series of photos we can see a Berlin full of holes, empty booths, trees that emerge vertically and point to the sky. A chaotic city, where the rows of buildings, but also each urban element, speak to us of a subconscious that emerges slowly although it is about to explode. In series like Kreuzberg but above all in Wedding Schmidt eventually forgot the commissioned documentary style and, starting in the 1980s, developed a more personal and daring visual language. As curator Thomas Weski points out, Schmidt acted as the author of his work from an early age, “editing, sequencing, designing the books, choosing their size and paper, supervising the printing and binding.” “Behind the topographic images of urban landscapes there are many author’s decisions: one is to print very gray, avoiding strong contrasts and trying to echo the Berlin winter”, he adds.

In the excellent series Waffenruhe (1985-1987), Schmidt uses the medium as a tool for subjective expression, giving rise to the psychodrama of a still divided city, in the middle of the Cold War, which is part of a German generation “without a future”. Close to expressionism, the photographs compose a dense and complex project.

It is curious that Schmidt is not as well known as other great names in German photography from the Düsseldorf school, such as Andreas Gursky – whose teacher he was -, Candida Höger or Thomas Ruff. Perhaps it is because the latter turned to color and large-scale photography, as well as objectivity and precision. Schmidt, on the other hand, devoted himself to the gray and the moment caught up in time, to the furtive and surprising gaze. First he would photograph and then ask questions.

Another fascinating issue in Schmidt’s work is the dialoguing nature of his photographs. Unlike the aforementioned artists, who deliver totem-images, where all the information is concentrated on themselves, those of Schmidt have an organic character, some complement the others. Thomas Weski recalls the Berlin photographer’s maxim of “1 + 1 = 3”, in clear reference to the fact that the content of his projects was created to see images capable of being transformed in contact with others: “Schmidt used his photographs as valid unique images but also as parts of a whole in their combinations of photographs, whether on the wall of an exhibition or in the artist’s book “. With this method, says Weski, “Schmidt extended the tradition of the visual essay, as the American photographer Walker Evans did in his American Photographs, 1938 “. This is very well perceived in his series Disadvantages (1980) in which a sick man is photographed from three different angles, as if Schmidt wanted to express that none of the images is the definitive image. The storytelling is also present in his work, in the series Kreuzberg the sets of photographs show, as if from a movie script, the routine of a German worker and a nurse.