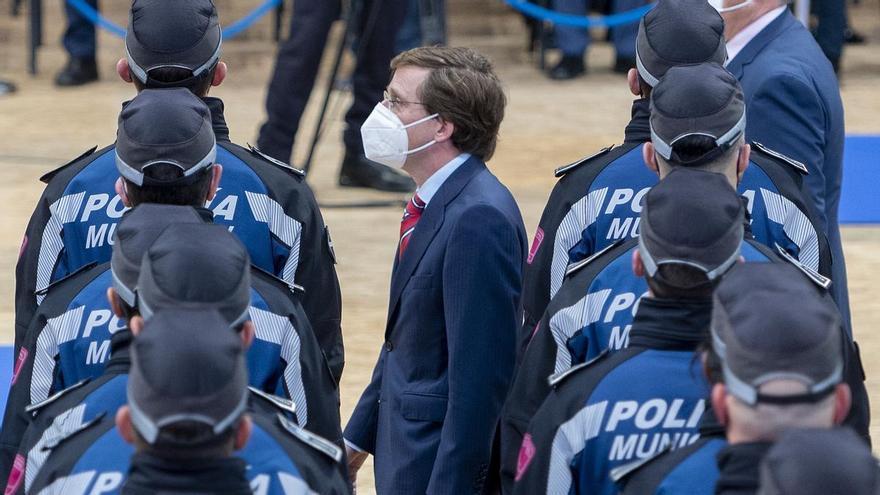 The WhatsApp messages incorporated into the legal case of the mask case between Elena Collado, a senior official of the City Council, and one of the commission agents, Alberto Luceño, were extracted from his mobile phone by a close associate of the person responsible for purchasing the Consistory in a pandemic, who is computer enthusiast. The process of extraction, selection and delivery of these WhatsApp to the Prosecutor's Office was controlled by Pablo Enrique Rodríguez, the director of the Municipal Police appointed by José Luis Martínez-Almeida, sources from the Consistory have informed elDiario.es.

The prosecutor requested these communications from Elena Collado at the end of her statement as a witness on March 16, 2021. So far they are the only evidence extracted from the telephone of the person responsible for the purchase of masks, the City Council's interlocutor with the two investigated commissioners who has been incorporated into the case.

That statement by Elena Collado turned the case upside down long before it became a court case. It happened while the Prosecutor's Office was developing a preliminary investigation with the aim of determining whether or not to file a complaint with the courts. Those preliminary investigations ended up taking 17 months. The chief anti-corruption prosecutor, Alejandro Luzón, would finally order the filing of the complaint on April 1, 2022, the day after elDiario.es revealed the investigative steps which had started in November 2020.

The testimony of Elena Collado, exonerating the Madrid City Council at all times from any irregularity, convinced the prosecutor Luis Rodríguez Sol, who stopped reflecting in his proceedings the possible crime of embezzlement, attributable only to officials or public officials. Anti-corruption had also begun investigating that crimeIn addition to whitewashing. With his statement, Collado caused the case to be directed only against two individuals, Luis Medina and Alberto Luceño – both now accused of the crimes of aggravated fraud, false documents and concealment of assets – and that the City Council was from that moment outside of suspicion.

At the end of the witness's statement, which took place in a relaxed atmosphere for 50 minutes, prosecutor Rodríguez Sol asked Collado for a series of documents while she took notes. “Unless she prefers that we do it in a more formal way, I already require her in this act…”, says the prosecutor before listing the list of requests. The prosecutor would not have been able in any case to seize the phone since it was a pre-judicial action and the high position of the City Council had the status of witness. Once the proceedings have been judicialized, Judge Adolfo Carretero will take a statement from Collado on May 8.

The sources consulted by elDiario.es maintain that after the Anti-corruption requirement, Collado asked a person close to his family, who is fond of technology, to extract his WhatsApp messages with Luceño. Communications between this commission agent and Collado, allegedly obtained from the latter's phone, were incorporated into a 4 gigabyte flash drive to the rest of the documents requested by the prosecutor and delivered to Anticorruption.

The documentation of the City Council has an entry date in Anticorruption of April 6, 2021, therefore, days before Luceño and Medina declared. It bears the signature of the general director of the Legal Department of the City Council, Jorge González Cortade, and its document number 2 refers to "Whatsapp conversations held between Mrs. Elena Collado Martínez and Mr. Alberto Luceño Cerón". “A flash drive is attached with all the information of text, audio, video, photographs and also a paper copy of the text messages,” adds the report, incorporated into the case that is instructed in the 47th Court of Madrid.

The same sources assure that the entire process was controlled by the general director of the Municipal Police, Pablo Enrique Rodríguez, due to the "legal knowledge" that the chief of the agents has, although at no time is his participation required by the Anti-Corruption Prosecutor's Office. depending on the position held in the organization chart of the Security Delegation of the Madrid City Council.

Pablo Enrique Rodríguez was already general director with Ana Botella, but from Emergencies. He was dismissed by the government of Manuela Carmena when he tried to reconcile the course of promotion to commissioner with his position. The PP made him director general again in 2019, when he recovered the municipal government. Police sources assure that Pablo Enrique Rodríguez, Doctor of Law from the Rey Juan Carlos University, has always asserted in the City Council his contacts with the judicial world.

Rodríguez's ascendancy in the City Council on issues that transcend his position is transferred by Collado herself to the prosecutor in her statement when the senior position of the Department of Finance states: "In this procedural sentence, excuse me, it is that I am Resources Humans, can whatsapp be contributed? It is that my director of the Police, who is also a procedural lawyer, I told him that I would send whatsapp, but he told me that in this procedural phase it is not possible. Collado, who presents herself as "Human Resources" before the prosecutor, was Secretary of State for Public Function in the Government of Mariano Rajoy.

elDiario.es has asked an official source from the Madrid City Council about the participation of the director of the Municipal Police in the process of collecting information from Collado, its treatment and the subsequent sending to the Anti-Corruption Prosecutor's Office, but a spokesperson for the Consistory has limited to answering that this is "an issue that the Prosecutor's Office has investigated for 17 months and in which it has not seen anything attributable to any municipal official, municipal worker, or municipal public official."

At another point in the interrogation in Anticorruption, Elena Collado offers the prosecutor the calls she had with Luceño and again summons the director of the Municipal Police, to whom she attributes the ability to recover them. "I don't know if the calls can be recovered, but our Police Director can do it," says the senior City Council official.

Prosecutor Rodríguez Sol asks at another point in Collado's statement how Luceño got to her. The Coordinator of Personnel and Budgets, and responsible for purchasing medical supplies in the pandemic, explains that it was through Luis Medina. Without being required by the prosecutor, Collado begins to say that what he does not remember is how Medina contacted her, if he was through "a councilor, a coordinator...".

When the prosecutor insists, Collado says that they gave him Medina's number and that he called him. Medina, however, told El Confidencial that she got Collado's phone number and that he was the one who called her. Mayor Martínez-Almeida, on the other hand, assures that his cousin, Carlos Martínez-Almeida, requested an email address from the general coordinator of the City Council, the mayor's right-hand man, Matilde García Duarte, without his knowledge, and that Luis Medina wrote that address including his mobile phone number. The prosecutor did not make any request to Elena Collado about her contacts with Luis Medina, of whom Rodríguez Sol himself assures in the complaint that he maintains a "friendship" relationship with the mayor's cousin and that he used her to access Elena Collado.