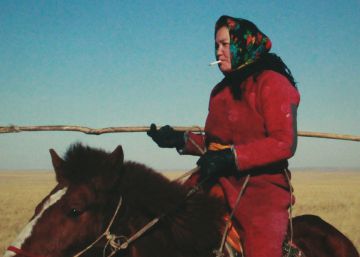 The dinosaur egg —Öndög (egg) in its original title— takes up the landscape and, in some way, the female character of Tuya’s wedding, Wang Quan’n film that in 2007 achieved the Golden Bear of the Berlinale. The Chinese filmmaker returns to the infinite territory of the Mongolian steppe to speak again of an admirable woman. A shepherdess who crosses the desert on the back of her camel with a cigar in her mouth and a rifle and lives alone in her little yurt. Nicknamed Dinosaur, the woman’s routine is interrupted when another woman appears dead in the middle of nowhere and the police ask her to feed and defend the inexperienced 18-year-old agent in charge of watching over the body.

THE EGG OF DINOSAUR (ÖNDÖG)

What happens from that moment is not only a sweeping visual beauty (the film is made up of very long sequences in which the camera barely approaches its protagonists, whose intimate gestures and dramas we discover infected by the same immensity of a wéstern ), but a delicious teaching of how in the most primitive and extreme places the strength, wisdom and tenderness of a woman goes around a thousand times of many of her first world counterparts. Yes in Tuya’s wedding its protagonist embarked on the search for a second husband to help her with work but also accept coexistence with her useless first husband, here again men again play that (almost comical) role of necessary evil.

Winner of the Golden Spike of the last Seminci, the film confronts the admiration that the lonely shepherdess – a figure whose authority and freedom is measured in the two sex sequences of the film – provokes in the talkative police, in the young agent or in his ex-drunk drunk in front of the terrible fate of that other woman whose lifeless body runs silently through this beautiful film.