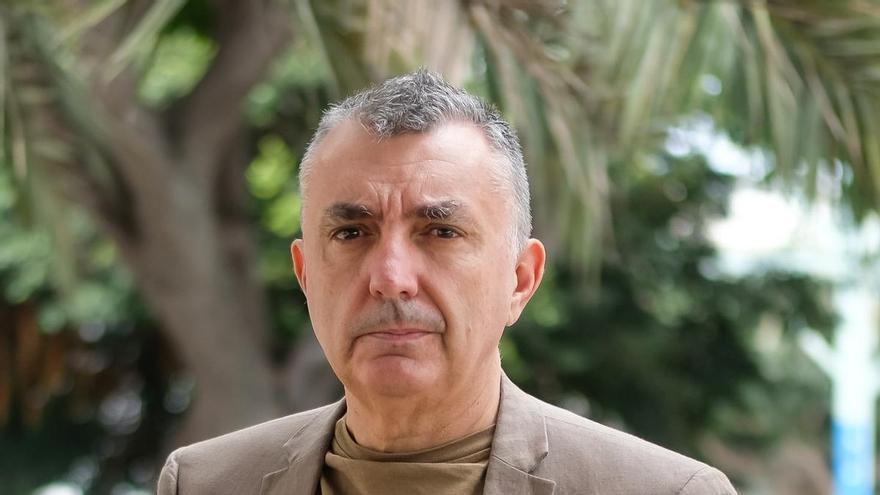 Manuel Vilas is, without a doubt, one of the most prestigious firms in the country. The Aragonese writer presented his latest novel ‘Los besos’ at the Book Fair, where he addresses a romantic story that occurred in the midst of a pandemic. The author of ‘Ordesa’, however, enters fully into aspects that are not so kind as the loss of passion between couples, which, as he affirms, is the cause behind which most of the separations are hidden.

How would you define your latest novel Los besos?

Like a love story of two grown-up people. He is 60 years old and she is 47 and they meet in a town in the mountains of Madrid while they are confined. He is in a cabin in the mountains of Madrid because he is an early retiree, and he has to go to a grocery store in the next town and the shopkeeper is the one he falls in love with at first sight. And she immediately begins to feel something for him. The two are alone and come from an experience. She comes from a failed marriage and he is a person who has never had a long relationship. And they begin to communicate by wasap.

And why have you chosen two characters with these characteristics as protagonists?

Many people, in their mature age, their way of continuing to feel life with intensity is through love. And that is what I came to reflect at the Fair. The two meet at a time when they see that love is a way out. It is a way to continue feeling illusion for life. Therefore, they both need to fall in love, he tries. This is a love novel written in the pandemic.

Many psychologists conclude that love is the only way out of internal problems.

Yes, it is the only way out. The only one capable of giving the existence of the human being a meaning. We already knew this before the pandemic, but I had the need to remember it. But it is love with all the depth and existential charge. And in love there is a lot of anguish and unease. People have suffered a lot for love, and will continue to suffer a lot. I introduce in my novel the difficulty of integrating sex into love. This is something that happens to many couples, who begin with a great erotic, carnal and bodily passion, with a lot of sex, and suddenly they see that sex disappear, and something else appears to replace it, which is complicity, friendship. , loyalty, tenderness, the territory of coexistence, of the most classic love relationships. But when there is a significant loss of that love passion, many people cannot bear it and they divorce and those couples break up because the integration between sex and love is difficult. What happens is that you cannot live without sex, and this is what is said. All couples who live without sex have a life that I think is not exciting.

That opinion may not be shared by some people.

Each human being freely decides what best suits his way of being in the world. But I believe that, from the biological point of view, the human being has an important sexual nature. Giving an outlet to that sexual need so that it is accompanied by an adult, serene relationship, with friendship and tenderness, is the challenge. And a human being who solves the integration of sex with love, I believe that he has solved 95% of his existence.

And a lack of passion may be behind divorces.

Certain. and it is not recognized because it is uncomfortable. People say “we separate because we no longer think the same thing, we no longer understand each other”, but in reality every couple that separates does so because sex has stopped working, but it is not said because it makes them socially uncomfortable. But you don’t have to be a sociologist to realize that they all break up because sex has disappeared. There are people who do not consider it so serious and can continue to have a marital relationship without sex or with routine sex, even if this is an oxymoron. It is also true that marriage is a comfort zone where many people do not want to get out of it even if they have lost their sexual passion because, from an economic point of view, it is a small company that works well since there are two payrolls in the face of ferocity economy of the world, two people against all the vicissitudes and it is better to be accompanied than alone. That is why there are many decisions that make people stay married in marriages that do not have sex.

And do these artificial marriages also appear?

The subject is discussed, but in the end the conclusion is that a full life has to have a sexual dimension. And 99% of psychologists are going to say yes. And understanding sex not as something banal, but as a complete communication between two people. The sex in my novel is very elegant. It is a very romantic novel. It is not raw and genital sex, but very spiritual, but that does not mean it ceases to be an important dimension of the human being.

It is said that passion in couples lasts a maximum of three years.

And sometimes two or sometimes four, but no more. Later, many marriages accept infidelity and have a double life and are pulling. I deal with all of this in Los besos because it is a subject that goes through their heads.

What does this novel suppose in the global of its trajectory?

It is a novel perhaps different from the previous ones because in those it had dealt more with the universe of the family, specifically the relationships between parents and children. Here it is more of romantic love, although it is still the theme of love that inspires me as a writer.

“The public management of the virus has been delusional in this country, quite the opposite of the attitude of the people”

Which is, ultimately, what everyone is trying to achieve.

In my previous novel, Ordesa, I said that the success of life is that someone is waiting for you somewhere. The mystery of life is the mystery of love. And without loving life it loses strength and consistency, we feel empty. The pandemic prohibited hugging and kissing and left us emotionally devastated. And the novel is titled Los besos, precisely as a vindication of what was forbidden, which was kissing.

Do you think that so many restrictions have touched us?

First, the body had to be saved, which was the most urgent thing, since it was a virus that crept into our body and killed us, and this has been overcome with vaccination, but now we are beginning to see the psychological consequences in mental health , which is very important because we are people who have a thinking brain. Now they are telling me cases of an adolescent with irascibility problems after being locked up for a year. And then there is the management of the pandemic which, in Spain, was absolutely delusional, one of the worst in the world. What happens is that, thanks to the responsibility of the people, who have been vaccinated, it has not been so serious. In Spain normal people always set an extraordinary example. We are the country that has wanted to vaccinate the most people, but the first political strategies were disastrous. We did not have masks, the sanitation overwhelmed, many toilets without protective suits. It was a public management problem, regardless of who was ruling, which was not satisfactory at all.

Do you also have the worst concept about most politicians?

Well, yes, and if this country works, it is because people get up early and are workers, but we have a lot of mediocrity in politics. But the European Union has also been very discredited. Perhaps the only one that has had more responsible politicians has been Germany who managed the coronavirus in an exemplary way. In spite of everything, every so often a politician appears who understands politics as a public service. The country progresses with politicians who understand politics as a sacrifice, a giving to others. A real politician is one who falls in love with people and dedicates his time to making people do well.

One of his most experimental books was Lou Reed was Spanish. And the title was already a declaration of intent.

I put it because where Lou Reed had the most success was in Mediterranean countries like France, Italy and Spain. A bit like Woody Allen, who is also Jewish, and is loved more in Europe.

He was a finalist for Planet with Joy. What do you think that the award is not well seen by some fans?

It happens because the Planet is a very popular award, and there is always a discussion between the commercial and the literary. But if Flaubert rose from the grave, wrote Madame Bovary and was given the planet, he would also tell him that it was his worst novel. It is more of a sociological concept than an objective assessment. But Alegría has been published in Italy and France. And in France he is a finalist for one of the most prestigious European literature awards that is held in November. And that’s because it was translated there without the sociological context of the Planet. It was read without that handicap that disfigured its context. That did not operate in French literature and there they saw that it was a good novel.

And which of his works satisfies you most especially?

A writer always says the last play because he is like the father who just had a son. But there is a title like Ordesa, which changed my life. It is published in 20 countries, more than 100,000 copies were sold in Spain, it was awarded the best foreign novel in France, a prize that has won Nobel prizes, and that has moved thousands of readers.