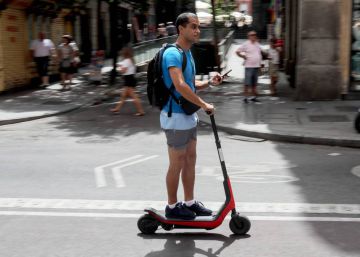 The General Traffic Directorate (DGT) has launched a new instruction on electric scooters where he warns that users of this type of Personal Mobility Vehicles (VMP) face similar sanctions to those of other drivers, that is, a range that goes from 200 euros for looking at the mobile on the road to 1,000 euros for exceeding the rates of alcohol or drugs. The DGT prepares a new regulation for the VMP – still in the processing phase – but in the meantime it has wanted to launch a transitory instruction directed "to the users of these vehicles, town halls and agents of the authority".

The department he directs Pere Navarro This explains the criteria to which these vehicles are subject to current traffic regulations. "It was a request that traffic policemen have made to us before the situations that are occurring in many cities and that have a negative impact on road safety, especially when it affects vulnerable groups," said Javier Villalba, deputy director of Regulations the DGT, through a statement.

The instruction considers electric scooters to vehicles of personal mobility (those of a single place and propelled by electric motor) whose speed is greater than 6 kilometers per hour but does not exceed 25. If it does not carry an engine, it is considered a toy and not It is subject to the same regulations. The DGT notes that users of these scooters have an obligation to undergo alcohol and drug tests, being sanctioned with the same economic amount as if they were driving another vehicle, in case of exceeding alcohol rates (500 or 1,000 euros depending on of the rate) or in case of presence of drugs in the organism of the driver (1,000 euros).

In case of refusing to submit to such tests, they will be denounced as an administrative infraction, unless the Prosecutor's Office establishes that it is a crime against road safety (typified in Article 379.2 of the Criminal Code). "If the driver is positive for alcohol or drugs, the VMP is immobilized, as is the case with other vehicles," the instruction adds. In addition, as they are vehicle drivers, "they are prohibited from driving using the mobile phone or any other communication system manually", so doing so entails a fine of 200 euros. They are also prohibited from driving using headphones or headphones connected to receiving devices or sound players, a practice that carries the same penalty (200 euros).

Meanwhile, the use of a helmet and other protective elements is governed by the provisions of the corresponding Municipal Ordinance. If the ordinance stipulates that the helmet is mandatory, not using it entails a fine of 200 euros and the immobilization of the vehicle. The DGT recalls that these vehicles are prohibited from traveling on sidewalks and pedestrian areas, where only skateboards, skates or similar devices can be moved that do so at the person's pace. Failure to comply with the rule entails, once again, the payment of 200 euros.

The movement of two people in VMP is punishable by 100 euros. In addition, negligent driving at night without lighting or garments or reflective elements will be considered, since in these cases, the driver does not take the necessary diligence to be seen by the other drivers or the necessary precaution to avoid putting himself in danger. The fine for breaching this rule amounts to 200 euros.