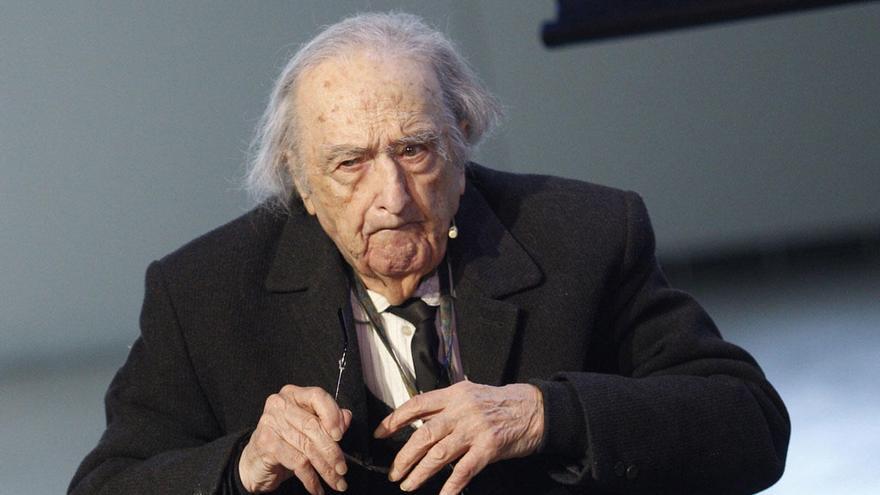 To understand what this surprising -unpublished- text by Rafael Sánchez Ferlosio, there is nothing more advisable than reading the explanation / introduction than its depositary, Tomás Pollán, offers us, given that he has been Ferlosio’s closest friend, the one who best knows the ins and outs of his work, and who, with his help and generosity, has made it possible for us to be reading this text exclusively in this newspaper today.

Tomás explains: “The unpublished writing presented here is a fragment of the 81-page handwritten text that Rafael Sánchez Ferlosio prepared between June 13 and 18, 1997 with a view to the autobiographical interview by Félix de Azúa at the end of the same month for the number 31 that the magazine ‘Archipiélago’ dedicated to the writer on the occasion of his seventieth birthday. Several sections of the preparatory manuscript were later incorporated into the writing ‘La forja de un plumiferous’, initially published in the same issue of the aforementioned journal, but many others of greater interest, such as the one we offer here, have remained unpublished to date. Sánchez Ferlosio preferred that the Archipiélago magazine publish ‘The forging of a down jacket‘instead of the interview with Félix de Azúa, which came to light in 2019 in the interview book’Dialogues with Sánchez Ferlosio‘”.

“In ‘La forja de un plumiferous’ the author presents an illuminating outline of his relationship with letters and thought. First ‘the detestable practice’ of ‘the beautiful prose’, then entertainment with speech and, finally, the discovery of the language. Ferlosio makes, in the important unpublished fragment published here, an implacable criticism of the cultivation of ‘the beautiful prose’ in which he incurred in ‘Alfanhuí’, a work for which, however, he felt a special fondness, and puts the ‘devastating example ‘-they are his words- from chapter XV of the first part ”. And Tomás Pollán adds, “it is difficult to find in Spanish letters, and I dare say that universal, the very rare case of a writer who with the utmost lucidity and the sharpest critical judgment returns, almost half a century later, on a text own, to whom he appreciated and to whom he had true affection, to discover his faults and expose them in a meticulous and detailed analysis ”.

Tomás is absolutely right. This level of self-criticism is very rare in Spanish letters, but not only in letters, but also in Spanish life in general. It is not so in other cultures, in which criticism is the main component and, it could be said, the foundation of civil existence. And that is why critical / self-critical reasoning, and its uneasiness, are much more present than among us. As can be seen in some notable literary cases. For example, in Thomas Mann’s “Diaries”, saturated with doubts and insecurities about the value of the work itself; or also, as is well known, in one of the writers most valued by Ferlosio, if not the most, Kafka (as stated in this same unpublished), who asked before he died – a promise that his friend of the soul did not fulfill- all its pages were set on fire. But if we jump to the category from the anecdote, it should be noted that this self-critical attitude is Protestant rather than Catholic (suffice to mention Weber). And maybe that’s why so strange in Spain. However, in Ferlosio criticism and self-criticism are very deep features not only of his conception of reasoning, but of his person. In his steely self-criticism there is nothing of pose, or posture, or imposture, it is a deep, final and devastatingly authentic feeling that conditioned his own life.

Between self-criticism and “beautiful prose” there is a relationship that is not a mere superficiality, but a more intimate causality. The “beautiful prose”, or the variant of the “rattle prose” that Ferlosio spoke of so many times, is the result of a culture very inclined to triviality and too attached to the vanity fair. Where do your critical deficiencies come from. Ortega’s overcharged cornyness, which Ferlosio’s father -the very peculiar character and magnificent writer Rafael Sánchez Mazas- protests between sarcastic and furious, must be framed in that Spanish tendency to lick his own flaws a lot. To put it with a bullfighting simile (a type of simile that Ferlosio liked a lot), that amounts to fighting looking at the lying. By the way, a more extensive ridicule, but basically identical in its substance, of Ortega’s elaboration can be found, years later, in Martín Santos’s “Tiempo de silencio”.

Going one step further, and without incurring the gossip that Rafael so much detested, the harsh criticism made of the “anti-Castilian” vices of Cela’s prose reveals another constant of Ferlosio: the almost clear separation that he made between critical judgment and personal feelings. Despite the harshness with which he judges Cela’s literary work in the final paragraph of this unpublished, Ferlosio recalled with some frequency the generosity that Cela had shown him on different occasions in his life, in which he offered his help. So at the bottom of that criticism there is primarily nothing personal, to put it with the stereotype that is so often repeated in American films. The “local” origin of this critical stance is in the incompatible vision that both had of what it is to be a writer. And if you hurry me, what it is to live. As is masterfully explained in “The forge of a feather jacket”, Ferlosio fled, hastily and virulently, from the danger of becoming a “literary man” to use, with all the paraphernalia of exhibition, public swagger and marketing bravery that this entails. For him, being a writer had nothing to do with the requirements that make you a “feather coat”, which, to put it in the same words as Ferlosio, consists of constructing a prose-ornament, without pregnancy, in which everything is superfluous and in the one that has nothing to decorate because everything is a perfectly empty cavity. Two curious references at this point. A similar thing was formulated by W. Benjamin in a famous analysis of a photograph of Kafka as a child. And two, using H. Broch’s beautiful analogy on fin-de-siècle Vienna, we could say that this writing is like turning prose into a beautiful waltz. That is, in hollow music. Obviously, “feather” and writer are opposing categories and realities. But if we go deeper, both Ferlosio’s criticism and self-criticism have a more “universal” root or origin: they try to “re-establish” or “restore” the order of the just. Which does not mean that their criticisms were or are always fair. But the purpose of justice is one of the foundations, if not the foundation, of all his work.

This leads us, diagonally, to a final question about his “literary case and failure” (sic): the success or failure of Ferlosio’s decision to “deny” and flee from literature. As much as Ferlosio, because of his heightened sense of the ridiculous and his rejection of anything false, refused to become a regular writer, one fact remains indisputable: he had a rather unique gift for writing. The great question – counterfactual – that should be asked is this: what would have happened if, instead of surrendering so passionately to grammar and language, as happened, or setting out to navigate the ocean of the essay, water in which it moved with the ease and agility of a fish, he would have become “addicted” to cultivating that extraordinary gift for writing. What would have come out of his virgilian hands? We do not know. But that doubt can never be resolved.