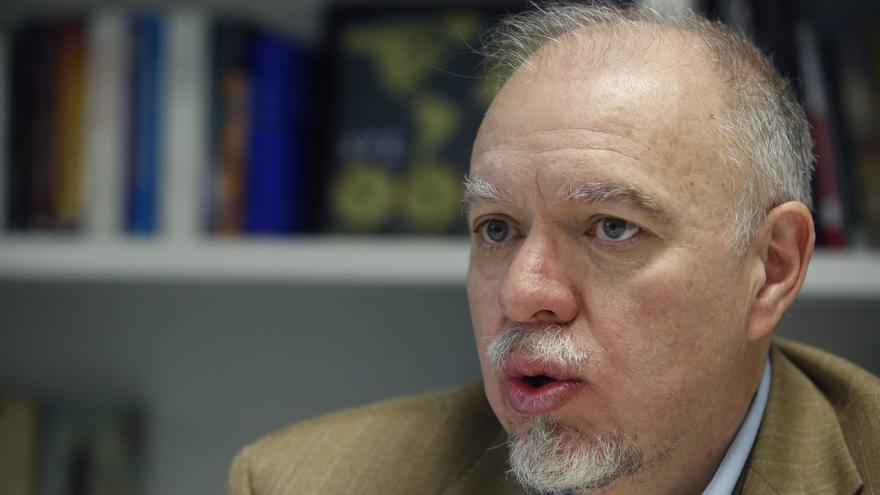 Madrid, May 16 (EFE) .- Aware that his character Remil is a “son of a bitch” whom he loves, the Argentine writer and journalist Jorge Fernández Díaz brings him back to life in “La traición”, the third installment of this saga of police espionage, a genre that qualifies as “the sociological literature” of our world.

From Buenos Aires, Fernández’s voice sounds resounding, powerful, like the story he brings us in “La Traición” (Destiny), the third time that the reader will meet this agent of the Argentine government’s secret services, a character “very liberating” that is allowing him to bring to literature those stories that he cannot “confirm” in journalism.

That is why he emphasizes that he is convinced that the detective novel “is the great sociological literature of our world.”

“What Remil has is a world that is made up of the backroom of power and politics. I am a journalist who has been in that trench for 40 years, looking behind the scenes of what politics and power are like when the microphones are far away. Politics in many cases, as in Argentina, is based on a mafia network, and that situation is a machine of ideas and frustration because journalism does not allow me to tell everything “, laments the author.

And that’s what it addresses on its pages, stories based on those “countless things” on the pages of a newspaper for a simple reason: because they cannot be proven.

“Fiction literature always came to my aid to cross that line, and to be able to tell what I know and cannot tell. It is something permanent in me, I always cut loose, news, and say ‘this for Remil’. Then that settles but at this moment I have no idea what will become of Remil in the future because he has a life of his own, he imposes himself with his themes “, Fernández advances on the future of this leading character from his previous installments,” El puñal “(2004 ) and “La Herida” (2017).

Born in Buenos Aires to Asturian parents and grandparents, Fernández acknowledges to Efe that this novel, which is “moved by pure and hard current affairs”, germinated during a stay in Seville, where he was invited to an act by his “older brother”, the writer Arturo Pérez Reverte. A story that was presented to him as a “revelation”, since for the first time he has made Remil walk through a story that happens almost “in real time”.

Specifically, in this installment the journalist places his character in current Argentina, where some wounds are still open in politicians and businessmen who play to “glorify” the 70s and the so-called “new Peronist resistance.”

A situation that starts with an attack on a president and that quickly leads the reader to confront Remil with the environment of another character already recurring in previous novels: Pope Francis.

“Something that is not known in Europe is that Bergoglio all the time operates politically in Argentina, operates with judges, with bishops, does political operations with leaders, businessmen, trade unionists and he took the habit of receiving characters in Santa Marta and the Vatican. unpresentable and repeating the idea that there was a judicial persecution in Argentina, which was not true, “he denounces.

And here is the “spark” of the “Betrayal”, because these meetings that Fernández talks about are the ones he has used as one of the pillars on which the novel pivots.

“I thought, what would happen if one of those unpresentable guests, an ex-guerrilla, took fiction as reality, that is to say, that there is a climate of insurrection in the country and that a coup must be made. Then I thought that some A friend of the Pope would try to hire a parallel security service in Argentina to handle the situation so that the Holy Father’s cassock is not stained, “he explains by way of” voila, here’s the intrigue. ”

Designed during the eight months of confinement that she has lived in her home, one of Fernández’s concerns was that these pages were very “plausible” because she needed a regular newspaper reader to be able to read her book the same way a newspaper reads, that is, “from end to end” and without stopping.

“It had to be of such great likelihood that a reader of a newspaper believes it completely. And that made me change the script many times, but luckily my wife was there and the novel saved me a lot,” he says.

But during this confinement Fernández not only needed the help of his wife, but he also had to “reread” the eight novels of Commissioner Maigret, written by one of the parents of the “noir”, Georges Simenon, who “was able to make novels short films that had the intensity of a long novel. ”

As detailed, “The Betrayal” also brings a novelty to Remil, since if in previous installments the love obsession or an emotional dysfunction transferred him, in this one he is transferred by insecurity and fear of following his intuition despite knowing that he is betraying his boss and friend, Commissioner Calgaris.

Regarding the doubt of whether the Spanish public will understand this 100% Argentine plot, Fernández argues that his country is “an excessive laboratory where brutal things happen.” A real scenario in which situations occur that can be for Spanish readers “a mirror that advances events”, although he wishes that “hopefully” it is not so.