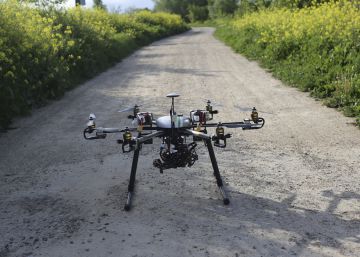 The human eye is only able to detect 7% of the radiation of light, but there is much more information in there. Carlos Tarragona, a biologist, and Heidi Moreno, a computer engineer, had been thinking about using that hidden part of the light spectrum to measure in detail, from a drone, fundamental agronomic values. “In 2014 I contacted drone companies and I realized that they did not know about technical issues such as precision farming, and that, in addition, the price they requested was ten times more than it cost. There we knew we had a hole, ”explains Tarragona. They proposed the project to Idom, the multinational where they worked, and after their refusal, they created SpectralGeo. They started in 2016 with an investment of 70,000 euros to buy drones, sensors and processors of up to 6,000 images. And they were supported by the EmprendeRioja plan.