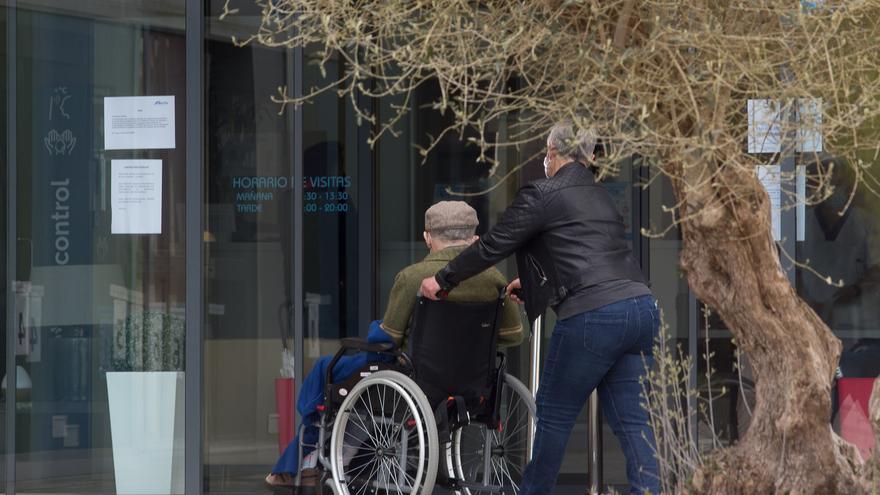 2021 has been a turning point for dependency investing. "It has been the year in which the negative trend of dependency in our country has changed since the 2012 cuts," says José Manuel Ramírez, president of the association of directors and managers of Social Services. Even so, and despite the positive data for 2021, 46,300 people died waiting for a dependency benefit. In addition, in January 2022 there were still 317,942 affected people on the waiting list to obtain help.

The managers of the unit have celebrated the financial injection of the central government to reduce the waiting list and processing times. According to the Annual Dependency Observatory, presented this Tuesday, the shock plan of the Ministry of Social Rights –which has involved an investment of 600 million– has had a direct impact on the system in 2021. "The number of people served increased by 97,912 and 27,453 new jobs were created," says the association's analysis. This trend is also perceived from the regional administration. Ministry sources acknowledge that "the measures on the table are good, but not all of them can be immediate." "What was not advanced in 2021 will be advanced in 2022", they indicate from the Ione Belarra team.

Despite these results, from the association of directors and managers of Social Services they make several warnings. "Inequalities between territories remain, both in coverage and in management models," adds the report presented. On this point, Ramírez is blunt in emphasizing that "Catalonia and the Canary Islands have a system in ruin." "They have not taken advantage of the economic injection to reduce the waiting list," he stresses.

"We are going in the opposite direction. In Catalonia there is no sensitivity on this issue," says María José Carcelén, president of the Catalan coordinator of relatives of 5+1 residences. "We are not only behind in waiting list issues. Despite the fact that in 2020 everyone was clear that the ratios had to be modified, we have made very little progress. There is an endemic lack of personnel. There is no modification project of ratios," he adds.

Currently, the autonomies with the greatest "limbo of dependency", that is, those regions that have the highest rate of people who are recognized the right to benefit, but have not yet been granted it, are Catalonia (32% ), La Rioja (31.5%) and the Canary Islands (27%).

Given these data, Ramírez considers that the Ministry of Social Rights should "penalize the distribution of economic aid" to those communities that do not meet the objectives set out in the shock plan. On the other hand, the territories where the "limbo of dependency" parameter is lower are Castilla y León (0.17%), Castilla La Mancha (4.5%) and Galicia (5.8%).

In the evaluation carried out, the members of the association of directors and managers of Social Services have celebrated the results obtained by the Valencian Community, which for the first time in 15 years has approved the dependency opinion made by this platform. This autonomous community is one of the only three regions – along with the Balearic Islands and Navarra – that have recovered places in residential care and day centers, after the impact that the pandemic has had on these services.

Also, from this platform they have highlighted the positive results of the Community of Madrid. According to information published by the association of directors and managers of Social Services, in the last year the Government of Isabel Díaz Ayuso attended to 19,244 new dependents, a figure with which the 2020 data improves by 14 percentage points.

Nationwide, at the beginning of the year there were still 396,787 people waiting for a dependency-related procedure, of which 317,942 were on waiting lists, another 193,346 people were in "dependency limbo" and 124,596 applicants They were still waiting to be evaluated.

With these data, the average time for processing a file is 421 days, always according to the estimates made by the association of directors and managers of Social Services. In relation to the waiting lists, they point out that the forecast of the shock plan stated that they should have been reduced by 60,000 people, however that figure has not been reached and the decrease has been limited to 38,807 people.

"The dependency system is going to a 'low cost' system," laments Ramírez, who has highlighted that in 2021 "financial benefits for family care have an average monthly amount of 236 euros." In addition, in a conversation with elDiario.es, she reports that over the years "the quality of care" has been reduced. This "downward" trend is maintained in "expenditure per dependent person served," according to figures provided by the association. In 2021 this parameter was reduced to 6,026 euros per person affected.

The unions coincide with the description made by the managers' association. Along these lines, Jesús Cabrera, responsible for social and health matters at the Workers' Commissions, defends that the pandemic "has brought to light the precariousness of the sector." And he warns that some autonomous communities, which have transferred the management of these services, are committed to replacing the offer of places in residences with hours of home help because this assistance is cheaper.

"In our country the percentage of the Gross Domestic Product that is dedicated to dependency is very low, it is 0.9% compared to 1.5% in the European Union," he adds. Beyond economic investment, Cabrera is committed to increasing ratios and improving working conditions to strengthen the state dependency system. "If the template is scarce, that affects users," says the CCOO spokesman.

In this precariousness of the service warned by Ramírez, he also indicates that home help presents "average hourly intensities of 33.6 hours per month." These figures represent an average attendance of an hour and a half daily from Monday to Friday. Another of the factors that the platform fears will lead to a worsening of care for dependent people is the proliferation of telecare.

In addition, in this report they address aid for caregivers. "This service was born a bit perverted because it has a very big flaw, it does not allow it to be compatible with work," says Paloma Pastor, president of the Sin Daño Foundation and mother of a young man with acquired brain damage. Likewise, it defends that this economic supplement does not "work well" because families with dependent people "what they are looking for is to join the labor market" and "not be caregivers for life". He therefore advocates a revision of the model to make it compatible with an active work situation.

With the economic injection of the central government, the contribution of the General State Administration "recorded in 2021 a percentage of financing as in 2012, while the autonomous communities have significantly decreased" their percentage contribution, the report points out. Last year "the General State Administration borne 21.5% of the global cost [del Sistema para la Autonomía y Atención a la Dependencia]users 21.3% and regional administrations the remaining 57.2%".

Given the state's push for the Dependency Law, Ramírez also points out that his platform trusts "that the Ministry's economic effort will not be used by some autonomous communities to save themselves money." In turn, it regrets that the central government has left without spending 75 million euros budgeted by the Ministry of Social Rights and Agenda 2030 in the "minimum level", a financing channel that is provided to each region based on different indicators, as the number of dependents effectively recognized and cared for. .

About this amount, from the Ministry of Social Rights they assure that "the execution depends on the management of the communities" and "not all have accelerated at the same time, since each one addresses its particular problems with its own measures." Beyond the 75 million indicated by the association, it must be taken into account that of the 1,746 million budgeted at the "minimum level", 95.6% of that item was executed.