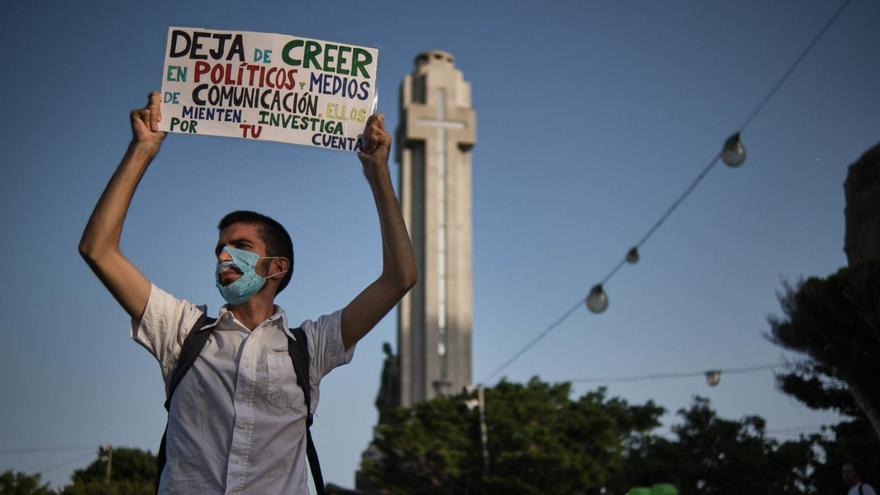 The Liberum association, with denial tendencies, has filed an incident of recusal against the magistrates of the Contentious-Administrative Chamber of the Superior Court of Justice of the Canary Islands (TSJC). The action, exercised by the lawyer Cristina Armas, is based on the Organic Law of the Judiciary, which establishes that it is cause for abstention or recusal (request that an authority be removed from the processing of a matter because there is a legal cause for it) that some magistrates have participated in a specific instruction or resolved on it in a previous instance. And it is that On December 24, the TSJC ratified the decision of the Government of the Canary Islands to require the Covid passport in the establishments of the islands at levels 3 and 4 of health alert and the association decided file an appeal on January 22 against the extension of the certificate. Now the entity considers it inappropriate for the court itself to decide the outcome of the appeal.

Liberum has already presented incidents of recusal of this type in other autonomous communities such as Andalusia, Asturias or the Balearic Islands. "We understand circumstantially broken the objective principle of objective impartiality of the Magistrates," they point out from the association.

The Contentious-Administrative Chamber of the TSJC is made up of President Óscar Bosch Benítez, Judge Lucía Deborah Padilla Ramos, Judge Antonio Doreste Armas and Judge María Mercedes Martína Olivera. This room has been in charge of knowing and ruling on various procedures initiated by Liberum against the Covid-19 passport in the Islands.

In the new letter of the association in which they request the disqualification of the magistrates, they consider that what is established in article 77 of the LOPJ must be applied and that they must be replaced because they have already ruled on the pieces of precautionary and very precautionary measures. The new chamber must decide on the challenge.

From Liberum they continue to consider that the passport requirement violates fundamental rights such as human dignity and free development of the personality, the right to equality and non-discrimination, the right to physical and moral integrity, the right to ideological, religious freedom and worship, the right to honour, to personal and family privacy, to one's own image and to the protection of personal data), the right to freedom of movement within the national territory or the right to assembly.

The association already requested last summer very precautionary measures against the Covid certificate and the limited capacity in hotels and betting shops at alert levels 3 and 4 in the Archipelago and to whom the TSJC (the Administrative Litigation Chamber of Santa Cruz de Tenerife) was right. In addition, the entity has also successfully presented other resources that have led to the annulment of the measure in different communities in the country.

The TSJC ratified on December 24 the decision of the Government of the Canary Islands to establish the mandatory use of the Covid certificate to access establishments and activities on the islands at level 3 and 4. The mandatory certificate is requested to access health and social health centers, to gyms and hotel and restaurant establishments, nightlife and recreational activities with capacities of more than 30 people, among others. A few days earlier, on December 3, the voluntary use of the certificate had already been ratified on the islands that are at alert levels 1 and 2, which allows establishments that take advantage of this measure to adapt their conditions to the lower level .

Voluntary accreditation is carried out either through the display of a negative result of a diagnostic test, or of vaccination against the disease, or with the presentation of an accreditation of having passed it. The truth is that on previous occasions, the TSJC had left without legal coverage, and therefore without validity, the Government's proposals in this regard. In addition, the same court has ruled out endorsing other measures such as the curfew on several occasions.