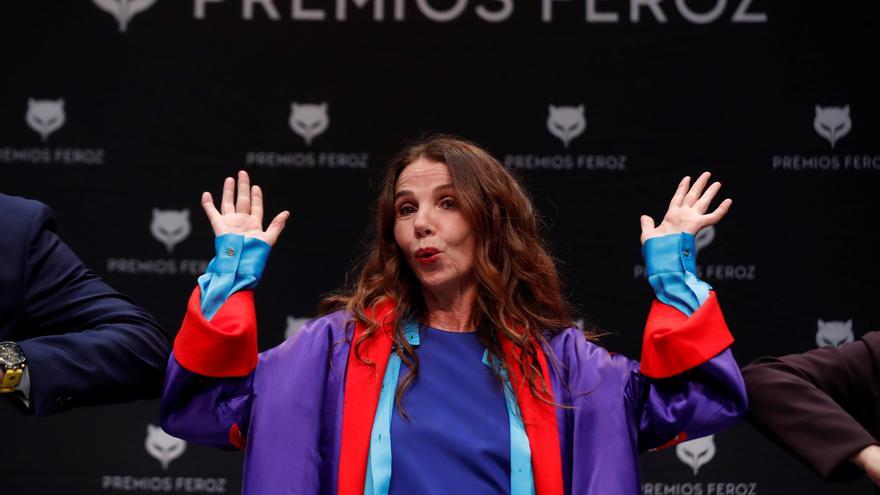 Madrid, Feb 26 (EFE) .- Neither vaccines are unproven experiments that cause more covid nor is the pandemic an invention to turn citizens into slaves, as the actress Victoria Abril maintains in some controversial statements that make her a defender of Overtly false coronavirus conspiracy theories.

The actress took advantage of a press conference this Thursday for having been awarded the Feroz de Honor prize to disseminate various denialist theses on covid-19 and vaccines against what she calls “coronacircus.” Thus, he affirmed that the anticovid vaccines “are unproven experiments” that are being “directly tested” when administered to human beings “such as guinea pigs.”

“Not only are they not working”, but, since the vaccination began, “there are more positive cases, more illnesses and more deaths,” said the actress, who cited the evolution in the United Kingdom as alleged proof.

He also argued that “the solution is to return to herd immunity, as Sweden has done, which has not confined, which does not wear masks.” And he denied that the virus that causes covid-19 is new and very dangerous: “We had his little brother in 2002” (the one with SARS) and “the world did not stop (…) nor did we become slaves.”

“The year 2020 has not had more deaths than 2019, where is the pandemic?”, Also proclaimed, in a later interview with EFE, this Madrid actress, for whom everything is a “plandemic” designed “to confine and alienate us all our fundamental rights and freedoms. ”

DATA: Official figures, scientific research and health authorities deny these false claims, from which the organization of the Feroz Awards has been unmarked.

VACCINES PASSED TRIALS WITH TENS OF THOUSANDS OF VOLUNTEERS

Faced with the claim that the vaccines “are untested experiments,” the reality is that all of them have the approval of the national drug agencies, which have published documents confirming the safety controls that have been passed.

In addition, scientific journals that are references for researchers and health authorities have collected the results of clinical trials and explain how the vaccines have been tested in tens of thousands of volunteers and have been well tolerated.

WITH VACCINATION, COVID CASES AND DEATHS HAVE DOWN

It is also not true that there have been more positive cases of coronavirus since the vaccinations began. On the contrary, the World Health Organization (WHO) confirms that the number of covid-19 cases in the world has fallen by 11% in the sixth consecutive week of declines, while deaths have fallen by 20%.

In the United Kingdom, official data also confirm that this country has exceeded the peak of the third wave with a decrease in infections of 15.7% in seven days and a decrease in the number of deaths of 39.4%.

The decline coincides with the fact that 18.69 million doses of a coronavirus vaccine have already been inoculated, while 700,718 people have received the two mandatory injections.

SWEDEN HAS EXTENDED THE RESTRICTIONS AFTER THE FAILURE OF ITS MODEL

Regarding the praise for the effectiveness of the Swedish model, the truth is that Sweden only advises the use of masks in public transport, but it does apply restrictions on the population, although less harsh than many countries, and its incidence of the coronavirus is double that of Spanish.

The Swedish Government has announced that it will advance the closing time of bars and restaurants and reduce the capacity in stores and gyms to stop contagion in the face of a “serious” and increasingly worse situation, with “a great risk of a third wave”, according to Swedish Prime Minister Stefan Löfven ready to “shut down” parts of the country if the situation worsens.

In November, Sweden reduced the number of people in public gatherings to eight, closed institutes and advised the use of masks on public transport.

At the beginning of the pandemic, the chief epidemiologist of the Public Health Agency, Anders Tegnell, designed a strategy of restrictions softer than most countries, but in June he acknowledged that they were “very wrong” and that the death toll had uploaded “dramatically”.

Contrary to what the actress maintains, SARS-CoV-2 is not comparable to the SARS-CoV-1 that caused severe acute respiratory syndrome (SARS), an epidemic that emerged in China in November 2002 that It spread to thirty countries, causing more than 8,000 infections and 774 deaths, according to WHO data.

The current pandemic is caused by a coronavirus other than SARS and its effects are not comparable: the number of deaths from covid-19 in the world is already around 2.5 million and the number of infections exceeds 112.6 million.

Unlike covid-19, SARS was deeply nested in only six countries. And it was controlled in just eight months with the same weapons of isolation and strict quarantines that are applied in the face of the current pandemic.

April also refers to the pandemic as a “plandemic”, a play on words with which deniers attribute the current crisis to a preconceived plan that invents or magnifies the epidemic to manipulate the population. In this context, the actress denies that in 2020 there were more deaths than in 2019.

It is another falsehood, which comes from the viralization of provisional figures from the National Death Index (INDEF) of the Ministry of Health. There were still deaths to be added that had not yet been incorporated into the statistics.

By Sergio Hernández and Ramiro Fuente

Marvel will make ‘Black Panther 2’ in Georgia despite electoral reform