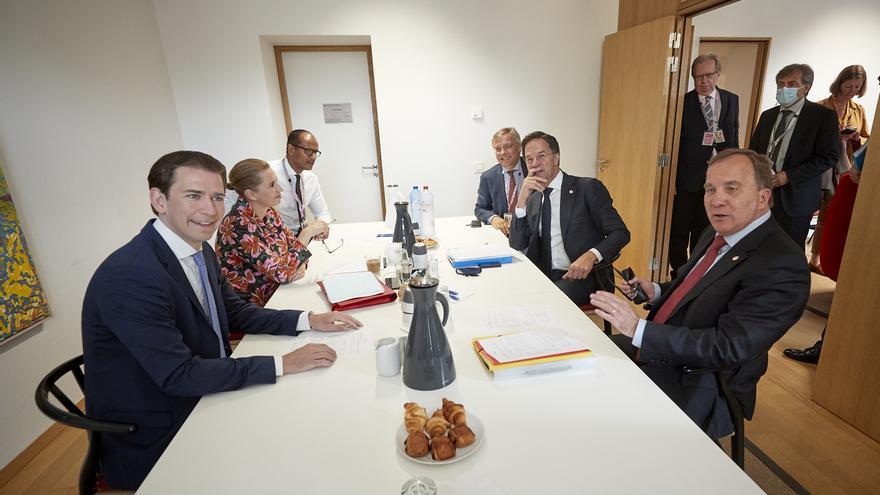 The demand by the Netherlands and its allies to cut the anti-crisis fund and increase control over how to spend it keeps the recovery summit blocked. After thirteen hours of negotiation, this Saturday at 11:15 pm the summit was dissolved after the dinner of the 27 until Sunday at noon.

“The deliberations are at an important stage,” acknowledged a German diplomatic source: “It cannot yet be said whether there will be a solution tomorrow. [por el domingo]. But the work is worth continuing because there is a wide willingness among Member States to find a solution. ”

The Netherlands got a proposal in the morning that seemed to satisfy its desire for control of the money disbursed to Spain and Italy – fundamentally. How? The President of the European Council, Charles Michel, devised a formula, dubbed “super emergency brake” that allowed any country to activate it when it believed that the conditions to receive the money were not being met and to refer the case to the finance ministers of the EU – Ecofin – or a summit of leaders. That is to say, he did not give in that the approval of the reform plans of the countries to receive the money requires unanimity in the council – meeting of the 27 – but he was given the ability to block it later. At a time when time is crucial for the economies and societies of the south in the face of the advance of the outbreaks of the coronavirus.

However, the Netherlands warned: “” This is a package and there are many more problems to solve. The proposals on governance presented by Michel are a serious step in the right direction. Many problems remain open and it will depend on the next 24 hours that we can solve them. ”

Indeed, after hours, another of the so-called frugal, Austria, got off the hook with the demand of a considerable snip to the recovery fund of 750,000 million. A petition that supported the rest of the club – Holland, Denmark and Sweden – and that was also supported by Finland.

In Michel’s proposal, the share of loans – which the frugal also want to cut – was also increased by 50,000 million and along with those 15,000 of transfers, the resilience and recovery fund went from 560,000 to 625,000 million. In other words, the President of the Council tries to compensate for the reduction in transfers by increasing the money managed by governments to the detriment of the European Commission.

But Michel’s proposal lasted as long as it did on Saturday. And this Sunday is called to present another that, in view of how it has been yielding to the frugal, may be aimed at cutting the volume of the fund, from 750,000 million, continue to decrease the part of transfers – now by 450,000 – and increase the financial compensation –Checks, rebates – to net taxpayers – frugal and Germany, now estimated at 46,000 million for the 2021-2027 budget.

So much so that EU leaders have been working for almost 48 hours without progress, that Italian Prime Minister Giuseppe Conte has published a revealing mid-afternoon video: “We are colliding hard with the Netherlands and other frugals. The negotiations are becoming more complicated. We are stagnant. They do not share the need for an ambitious response, especially with regard to subsidies, but also partly questioning loans. We are trying to involve everyone in this European perspective, everyone must understand that not only Italy is It benefits not only Spain, Portugal and the other most affected countries, but all of Europe in an integrated economy. ”

Across the table, Austrian Chancellor Sebastian Kurz was rubbing his hands: “Things are moving in the right direction. We have seen a reduced multi-year budget proposal, economic compensation for Austria has increased, and The recovery fund negotiations are still open to questions of reducing its volume, in particular the one that has to do with transfers, and the question that this money is used correctly for the green, digital transition and the necessary reforms remains open, especially in some countries that need to improve their competitiveness. ”

“Generally speaking,” said a diplomatic source, “we still have Mark Rutte isolated on the issue of unanimity, but he seems willing to study new control mechanisms. As for the size of the stimulus plan, the frugal remain very hostile to transfers and we continue to fight to maintain a significant volume of subsidies and a global amount of 750,000 million euros. ”

Spanish sources try to convey tranquility: “What is being negotiated is historic. It is a recovery fund in which the European Commission will go to get money in the financial markets and then it will be disbursed among all. It is historic and It is very important. It is a very important package. We are optimistic. There are some who resist because it seems to them something that goes far beyond what they could have thought. That is what we are. But a few days ago the frugal people refused to the bottom, for the European Commission to issue the debt in the markets and for transfers. ”

“What we are insisting from the beginning,” continue the Spanish diplomatic sources, “is that this is a fund for the whole of Europe. It is not only for the countries that will receive more. The countries most affected by the pandemic must receive more. “Spain, Italy, France – where the pandemic has hit the hardest. But that does not mean that this does not benefit everyone. The internal market can suffer a lot if in the end this recovery fund is not launched. That is what the president has been insisting during all these previous weeks. ”

For now, the negotiation, which requires unanimity, remains blocked by the demand by the Netherlands and its allies to cut the anti-crisis fund and increase its control over disbursements.