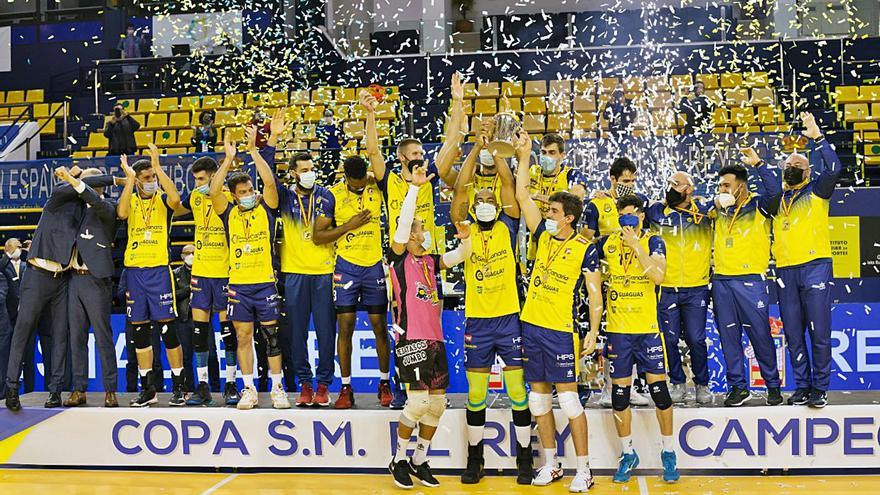 So much so that in the ranking made by the prestigious specialized website Volleybox.net, the Gran Canaria team appears as the second best team in the world so far this year. It is only surpassed by the Volley Lube of Italy.

The Guaguas, in the meritorious classification of this 2021, figure with 49.25 points, for the 50 that the Italian squad adds. This provisional podium is completed by Arcada Galai from Romania (43.25).

In this score of the yellow team, adds its fifth position in the CEV Cup, a continental competition in which it was only one set away from qualifying for the Final Four, and the victory won, without giving up a single set, in the Copa del Rey held at the Insular Sports Center facilities.

Precisely, his rival in that cup final, Volleyball Palma, is the next Spanish club to appear in this world ranking. But a long way from the yellows. The Balearic Islands occupy the 46th place.

And that Guaguas classification does not account for the excellent role of the yellow box in the Men’s Super League, where it is second with one game less, adding no less than 18 victories in 19 games. His only mole, the defeat on the Teruel court, the leader.

Tomorrow it is the turn of the revenge for Sergio Miguel Camarero, as the Teruel team pays a view to the Insular Sports Center of the capital of Gran Canaria. The yellows will try to retaliate for the lost meeting in Teruel, at a delicate moment, perhaps the only one so far, of the islanders, as they arrived with reduced preparation due to the coronavirus outbreak that affected the team.

It should be remembered that in the last ranking published by the specialized website Volleybox.net, last January, the Guaguas appeared in the tenth position of this world ranking after its great role in the round of 16 of the CEV Cup continental .

Second place in the planetary ranking was not the only positive news that the Gran Canaria club featured yesterday. Another recognition, this time individual, endorses the great moment that the team is going through, led by Sergio Miguel Camarero from the bench.

One of his men, the American Matt Knigge, was chosen to be part of the ideal team for matchday 21 of the Men’s Super League, in which Guaguas won again against another of the illustrious national league competition, Volley Palmas , which he defeated in his fiefdom 0-3 a week after defeating him at the Insular Sports Center for the same result in the final of the Copa del Rey.

The yellow center-back achieves this distinction for the third time, since he already integrated the ideal seven on dates 12 and 18 of the regularity tournament, in addition to being also chosen in the cup competition in his demarcation.

The considered the best center-back in the Men’s Super League last season, when he was at Emevé de Lugo, already occupies the second position in the ranking of the best in this demarcation of the highest category.

Undoubtedly, the performance of the young North American player is being one of the many positive news that this Guaguas is bringing in the season of his return to the competition decades later.