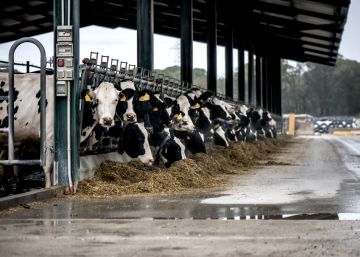 Livestock productions in Spain They have experienced significant growth in the last decade, reaching a total volume of about seven million tons and a record turnover value of almost 20,000 million euros. This growth of supply in most livestock huts has placed Spain as the second country pig producer in the European Union (EU) and in the head group in poultry and beef.

The process has not gone free. The change of model has led to the increase in the number of animals in intensive farms and the need for heavy investments to improve them. But at the same time it has meant the closing of dozens of thousands of farms due to the lack of generational relief (especially in extensive cabins due to their high degree of dependence and low profitability), with negative effects due to the progressive abandonment of the rural environment.

The farmers agree to describe the current moment of the sector as difficult, although each one blames it for different causes. In the case of milk beef The fall in farms has been spectacular: from 140,000 in the 1990s to less than 14,000 today. But the number of cows stopped its fall and recovers, reaching about 850,000 units, with an increase in production to 7.2 million tons. For Román Santalla, Galician farmer member of the Union of Small Farmers and Ranchers (UPA), the problem with these farms is the low sale prices. Something important, according to Rosario Arredondo, president of the Inlac dairy interprofessional and rancher of a family farm in Cantabria, but not as much as the sacrifice required by farms to those responsible. She says she has had a vacation in 31 years. Of course, he has relief in his daughter Maria, who will continue the tradition by vocation.

The same as Alberto Álvarez, partner of Central Lechera Asturiana, forest engineer, 42, married and with a daughter. He knew that his business was the exploitation of the family and left his professional activity. It weighs the vocation, he says, while regretting the lack of rural services to attract young people. Fact that has led to the average reduction of 800 dairy farms annually in the last decade. On prices, Álvarez explains that between 2013 and 2014 they approached 0.40 euros per liter (accounting for aid) and the level of abandonment of the field was the same as now.

In beef cattle farms have fallen from the more than 120,000 existing two decades ago to the current 80,000. Also, where appropriate, the number of animals per farm has increased to 5.9 million head. Of them more than 2.5 million are sacrificed each year to reach a production of about 670,000 tons. Gonzalo Merino, a farmer from Morata de Tajuña (Madrid), stayed in business because he is the third generation in family exploitation.

It is just the opposite of what happened in sheep farms, where both the number of heads and farms have been reduced in the last 10 years. It has gone from 25 to 16 million units and from more than 120,000 to 114,000 facilities, with a meat production of about 120,000 tons and a decline in demand. Francisco Marcén, head of the Oviaragón cooperative group, denounces that the biggest reduction in the cabin occurred when the aid went down and assumes that this is a retreating activity, although there are young people willing to enter the sector with stagnant or semi-stagnant herds (they keep the animals within an enclosure), although there are no facilities for their incorporation. Missing pastors. A situation similar to that in goat farms (where three million heads are produced in just over 70,000 farms).

A different chapter deserves that of white-coat pig farms. They have gone from producing 3.4 million tons to 4.5 in 10 years, mainly thanks to the integration system, which has meant drastically reducing the number of very small farms (up to 86,000). However, it has been beating year after year all records in number of animals, to exceed 30 million censored.

In addition to the lack of generational relief, the strong dependence or low profitability of Spanish livestock farms, there are other problems of greater importance, such as the commercial agreements signed by the European Union with third countries to import products. And not only that. The sector must also face the growing demand for vegan meat and the increase in vegetarians for health reasons, which account for about 8% of consumers. The World Health Organization (WHO) itself has warned of the harm of eating red meat.

Against livestock productions are also different animal movements that demand changes in society to favor the welfare of livestock and prevent their sacrifice, as well as consumption. Also the Food and Agriculture Organization of the United Nations (FAO) when it claims that 40% of the world's food resources are used for animal feed, while there are cheaper proteins, such as insects. And not only that. Livestock farms are criticized for the significant consumption of water they need and the high greenhouse gas emissions (estimated at 14% of the total) that they cause, especially beef.

In addition, as an alternative to the consumption of meat, which in a decade has fallen from 60 to 47 kilos per person per year in Spain, strong investments are being made by large groups and entrepreneurs such as Bill Gates to develop laboratory meats from tissue of an animal that are giving rise to companies such as Mosa Meat, Just Meat, Aleph Farm, Memphis Meat, some of which have skyrocketed in the American Stock Exchange; or the Spanish Biotech Foods.

The Spanish livestock sector is concerned about the negative consequences of the trade agreements signed by the European Union. And the focus of this concern is the agreement signed with Mercosur, which will be developed in the coming months. In livestock matters, it provides for the entry of 99,000 tons of beef with reduced tariff throughout the EU and 180,000 tons of chicken without tariffs, which would add up to the more than 500,000 tons that already enter Brazil into the community markets. No worries in the pig business. The fact that imported meat can come from fattened animals with unauthorized products in the Union is disturbing.