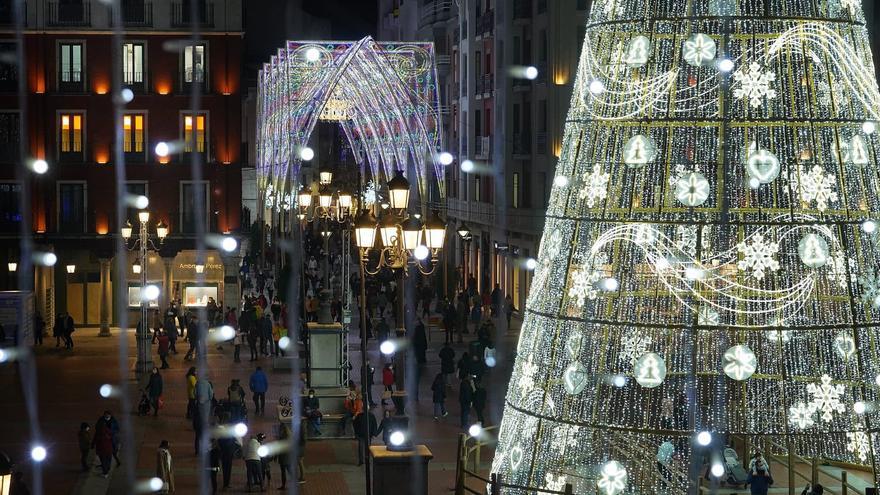 Christmas lights or direct aid to hoteliers and merchants: this debate divides the PP in Castilla y León, which has a different position if it is in the municipal government or in the opposition. In Valladolid and León, where the PSOE governs (with a confluence of IU in the case of Valladolid), the ‘popular’ reproach these “unnecessary expenses”. The ‘popular’ municipal group of Ávila, the city in which Por Ávila governs (a split from the PP), has also protested. Specifically, in these three municipalities, campaigns and bonds have also been started to promote trade, in parallel with the Christmas lights.

Meanwhile, in Salamanca, the PP, in government, defends that the lights serve to promote trade, like the rest of the government teams, which highlight the role of the lights as a ‘call effect’. Outside the community, the Madrid City Council, governed by the PP and Ciudadanos, has also opted to increase the amount allocated to Christmas lights, from 3.08 million to 3.17 million this year.

In León, the Popular Party requested at the beginning of the month that 80% of the cost of Christmas lights be allocated to direct aid to shops, hotels and social groups while the Leonese City Council was committed to increasing the party of Christmas lights until 180,000 euros. Last year 78,000 euros were allocated in the lights and 30,000 in subsidies to the Chamber of Commerce to illuminate more streets. This year, the City Council has decided to finance all the Christmas lights and that the merchants do not participate in the lighting. Nor has the Chamber been subsidized and the Consistory has tendered the entire amount to the same lighting company.

The Leon councilor for Economic Promotion, Susana Travesí, highlights her commitment to Christmas lighting to “invite the people of Leon to go out on the streets and contribute to the revitalization of the local economy, small businesses and, if restrictions are lifted, the hospitality, in a safe, responsible manner and following all the recommendations of the health authorities “. The objective, he insists, is that Leonese “do not forget” to consume in the local trade and achieve “its revitalization” in these moments “of special difficulty” caused by the coronavirus pandemic. In fact, in recent months the City Council has maintained a bond campaign that amounts to half a million euros.

The Popular Party tried to stop this increase in the game with a motion in which it reflected its rejection: “This is an amount that is difficult to justify in this situation and an amount that should be used in aid to businesses, industries and hotel and restaurant establishments in our city and direct aid to people, families and social groups in serious situation “.

In opposition: “It is not the year to throw the house out the window”

A few weeks ago, the mayor defended his bet on the Christmas lights, which were turned on on November 12 to boost consumption in the center. “They are multi-year contracts, this cannot be decided in one year. There is a contract and it must be fulfilled, and not fulfilling it implies compensation”, highlighted Óscar Puente, who wanted to remember that the business is the one who contracts the Christmas lights, although “the City council finances an important part “. The Valladolid councilor stressed the importance of lights, especially this year, which has been “hard” and, “from a psychological point of view” it allows citizens “to have the opportunity to live a Christmas as close to normality possible”.

In relation to direct aid from the Valladolid City Council, the City Council, like so many others, has organized two bond campaigns to boost consumption in small businesses with half a million euros that allow the exchange of a bond for a discount.

In Ávila, this year’s budget is also higher than last year, at the request of merchants: it goes from 80,000 euros (in 2018 a biennial contract was signed that should have been maintained in 2019) to 100,000 euros “because the existing lighting of the previous years was clearly insufficient. ” Faced with the complaints of the Popular Party, Por Ávila denounces the “double standards” of the ‘popular’ within the province. “While in Arenas de San Pedro ‘Christmas elements increase’, in the capital of Avila votes against the bidding process for the contracting of street lighting at Christmas “. Once again, the City Council highlights the importance of light decoration” to boost local commerce and the hotel industry, with the firm conviction that the residents of Avila do not have to give up Christmas “.

The municipal group of the PP in the City of Ávila has asked the mayor to rectify the Christmas lights sheet and cancel the one that allocates 107,000 euros for merchandising serigraphed that will be distributed between hoteliers and merchants. The ‘popular’ claim that these items go to direct aid to the sector.

One of the exceptions is in Burgos, where the PSOE governs, but the Popular Party has not protested the Christmas lights. The Burgos City Council will spend about 20,000 euros more to “increase the showiness” of some elements. The lighting of the streets will have a budget similar to last year (134,000 euros) and the Municipal Institute of Culture (IMC) increases its amount to 54,431.85 euros, which will be allocated to three lighting elements: a nativity scene, a gift package and a cylinder with a custom sound and light show.

In the Government, bet on the lights

The Salamanca City Council (PP-Cs) has allocated some 300,000 euros to Christmas lights this year, almost 67,500 euros more than in 2019 because the destination of this amount has been changed, which was to be used to illuminate the fairs. As there were no fairs, there were no lights and therefore, as the contract included both services, this year more lights will be put on than in previous years. As in Valladolid, this year the lights were turned on to promote trade.

From the municipal socialist group, they regret that this decision has not been submitted to debate, but they understand “the need to increase consumption in local commerce.” “We do not know if the installation of lights earlier than usual is substantiated in some conclusive market study on whether, in the current pandemic conditions, this will mean an increase in consumption,” asks the socialist spokesman, José Luis Mateos, who is committed to other measures such as, for example, consumer bonds to spend in commercial establishments in the city. The Salamanca City Council started working on this idea a few days ago. Its intention is to issue bonds that could reach up to 50 euros for purchases over 100 euros from December.

In Palencia, the other capital in which Ciudadanos and the Popular Party govern, it has awarded a contract for the next three years for 206,232 euros, which will be about 68,000 euros per year, a figure slightly higher than last year (53,999 euros ). This newspaper has tried to contact the Councilor for Culture, Tourism, Festivities and Sports of the City of Palencia, without response.

The budget for lights in the rest of town halls

In Segovia (PSOE) about 48,000 euros will be allocated, an amount similar to that of other years. Of course, this year the City Council will pay 100% of the contract, since in other years the establishments in the commercial areas of the city have contributed to the payment of 50% of the rent. In addition, the lighting of the lights has been advanced, as in other cities. The contract was signed last year for 2019 and 2020, so it has been executed without further controversy.

In Zamora (Izquierda Unida), the budget for lighting is 50,000 euros, the same as last year. “At no time has it been considered to suppress it this year since we consider that Christmas lighting contributes to promoting commercial activity in a sector very affected by the pandemic and may also be beneficial for all citizens that this year we are going to be deprived already of many other things also during Christmas “, maintains the City council.

In Soria (PSOE), last year a biennial agreement was signed (for 2019 and 2020) worth 272,000 euros, so the same amount will be allocated this year as last: 136,000 euros. The Consistory defends that it was agreed in the council of commerce and was one of the requests of the sector as well as to advance the ignition to the last weekend of November.