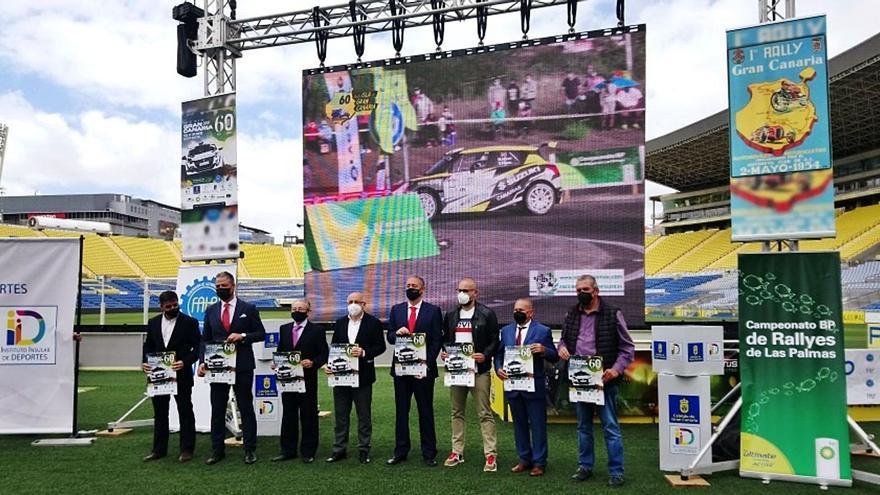 The Isla de Gran Canaria Rally arrives at an unbeatable moment in its 60th edition. This is attested by the number of registered for the 2021 event, which will take place between tomorrow and Saturday in Gran Canaria under the organization of the Maspalomas Team . A total of 104 teams will face a route that will take them from Las Palmas de Gran Canaria to San Mateo, with more timed sections also spread over the municipalities of Valsequillo and Tejeda.

The test begins this Friday with the verifications of the vehicles, which will take place from 12.00 to 18.00 in the Annex of the Gran Canaria Stadium. Starting at 7:10 p.m., the caravan will head towards San Lorenzo to contest the first stage, starting at 7:30 p.m.

After sleeping in San Mateo, the race resumes on Saturday at 9.30 am with the special Camaretas-Cueva Grande-Los Marteles, which with the Cernícalos-San Mateo and the Ariñez-Utiaca make up the main bulk of the itinerary, which It ends at 6:00 p.m. again in La Vega, the town where the 104 participants will attend.

The number one will be carried in their Mitsubishi Lancer EVO by Juan Carlos de la Cruz and Rogelio Peñate, the leaders of the BP Championship in Las Palmas, followed by Julio Martínez-Pedro Viera, with the Porsche 911 GT3, and Julián Falcón-Jacob Páez, with another Porsche 911 more evolved than the previous one.

The Faroga Cup will be present at the Isla de Gran Canaria Rally with 21 teams; the Adam Cup will have seven representatives and the Nissan Micra Cup, with 10. The Toyota Enma-2RM Trophy brings together seven teams and the Promotion Trophy-FALP, 12.

Also joining the 60th edition of the event are the drivers and co-drivers of the Best Newcomer Trophy, Clio Prodrive, Marbella Cup and FALP Steering Wheel. In addition, the followers of the Sport Regularity Championship gather, with 10 teams on this occasion (seven in high medium and three in low medium).

The Gran Canaria Stadium yesterday hosted the official presentation of the Isla de Gran Canaria Rally, an act that was chaired by Antonio Morales. The president of the Cabildo was accompanied by the Minister of Sports, Francisco Castellano, who will have a more prominent role than usual in this edition by accepting to live the test from the inside as a pilot of the zero car, a task that will be carried out by the Porsche 911 GT3 on loan from Juan Carlos Quintana.

Institutional representatives of the main municipalities through which the test takes place also took part in the launch of the event: Antonio Ortega, mayor of San Mateo, Aridany Romero, Councilor for Sports of Las Palmas de Gran Canaria, and Gregorio Peñate, responsible for the sports area in the Valsequillo Town Hall. On the federative side, there were the presidents of La Canaria and Las Palmas, Benito Rodríguez and Miguel Angel Domínguez, respectively, while the race director, Acaymo Reyes, was in charge of revealing the organizational details.

This official presentation served to stage the long history of the oldest test of the Canarian rallies and practically of Spain. Moments before the start of the act, a Citroën 11 similar to the one that won the first victory in 1954 arrived on stage, on loan from its owner Manuel Verona.

Images of the ‘Node’

Juan José Alonso, veteran informant, co-driver, winner of the rally on several occasions and even organizer of the same, then intervened. He offered several brushstrokes of the legend of this test, completing the images projected on different editions, even with the surprise of one of the first that was collected by the TVE Node in 1957.

Later, José María Ponce, one of the historic Canarian motor racing players, addressed those present who has 10 victories if we add the one he achieved as José Antonio Monzón’s co-driver; In addition, he is the only one of the winners listed among the participants in 2021 and therefore can raise his number of wins.

Ponce, representing all the dean’s winners, highlighted the enormous difference between rallies from before and now, and their evolution in all sections. In addition, he showed his gratitude to the organizers for keeping the Isla de Gran Canaria flame alive.

The president of the Cabildo, for his part, highlighted the significance of the event for the Island and the role played by the institution in the future of these 67 years of life of the longest running rally in the Canary Islands and Spain, without ever changing its name and place of celebration.

Emma Falcón and Eduardo González will not be able to be in the 60th edition of the Isla de Gran Canaria Rally. Although those from Citroën Las Palmas were among those registered, they will have to wait until the next round of the BP Rally Championship. The reason is that the engine of his C3 R5 had to be sent to the Sports & You facilities, Citroën Racing representative for Spain and Portugal, after Yeray Lemes and Rogelio Peñate finished the last Rally Villa de Adeje with mechanical problems. Although they finished in second position in this test valid for the Canary Islands Championship and the Spanish Rally Championship of Spain, in addition to winning the FIA ​​European Rally Trophy section, the vehicle reached the goal with the four cylinder touched and the turbo broken. | VP