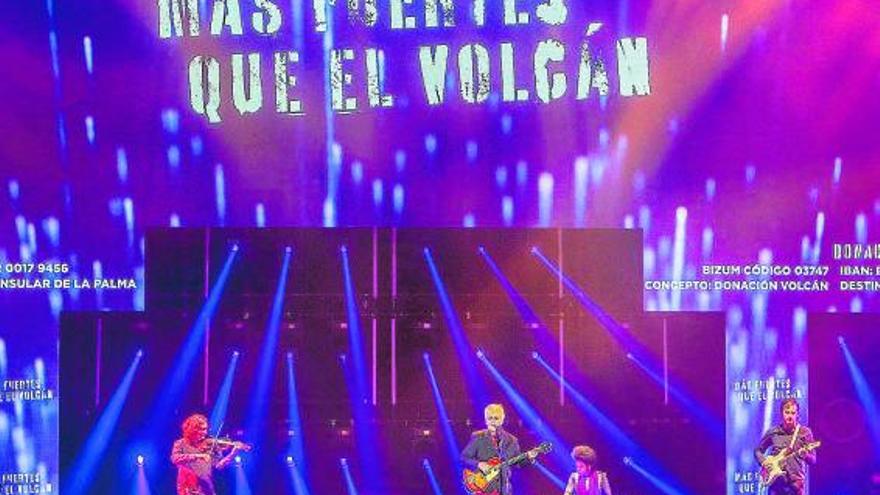 RTVE He recovered the format of his great musical productions to reunite last night on two stages -one, the WiKink Center, in Madrid, and another, in the Plaza de España, in Los Llanos de Aridane- to twenty-four singers of different styles and generations in a solidarity concert that the entity broadcast on all its platforms to raise funds for families affected by the eruption.

From great music classics like Joan Manuel Serrat, Raphael or Miguel Ríos –Some already immersed in their closing tour of their trajectory–, to values ​​from other generations, such as Kiko Veneno, who opened the evening to the rhythm of her song With the force of a volcano, or Melendi, who has touched her heart since she presented her composition for solidarity purposes Virgen de las Nieves and that she sang again last night. In his case, from Los Llanos de Aridane, before the public that made up the 250 victims of the eruption, who were able to attend after the Cabildo de La Palma raffle tickets among those affected to attend, guaranteeing health security measures.

The musical event, which was presented under the slogan Stronger than the volcano, also brought together artists from both shores –peninsular and insular–. Along with Loki Meyeres, La Oreja de Van Gogh, Coque Malla or Alaska herself, interpreters with saltpeter on their skin, in the case of Valeria Castro, a native singer-songwriter precisely from Los Llanos de Aridane, from where she performed last night, or Maikel Delacalle, Efecto Pasillo , Pedro Guerra or Ana Guerra, among others.

Because the musical show was not only made with songs, different videos were also included in which personalities from the world of sports, such as Pau Gasol, Pedro Rodríguez and Saul Graviotto; Gran Canaria actress Toni Acosta or Santiago Segura, chefs Pepe Rodríguez and Jordi Cruz, Imanol Arias and the team from Cuéntame or Boris Izaguirre, among others, sent messages of encouragement and solidarity. The majority agreed to endorse Joan Manuel Serrat's request, so that even though the volcano has been extinguished, La Palma will not cease to be news in the national news until the reconstruction work is completed.

With Jacob Petrus and Ana Ibáñez as masters of ceremony in Madrid, and Roberto Herrera, from Los Llanos de Aridane, one of the most emotional moments was the connection that was made with the family formed by Nina and José Ramón, octogenarians from Tajuya who later 60 years of marriage had just returned home, with all the guarantees, after being evicted to avoid the damage of the eruption. From the living room of their home they asked for help through the cameras for the people who have been left without a home.

If the artistic cast was luxurious, the themes chosen by many of the interpreters draw attention and that in an evening of solidarity like last night they became a message of encouragement to those affected or a toast to a prosperous future: from Thanks to life, from Raphael, to Joan Manuel Serrat, with Caminante, the poetry of Antonio Machado; the Hymn to Joy, by Miguel Ríos (who took off his initial mask); Seven doors, by Pedro Guerra, dedicated to the Canaries, or Guerrera, by the singer-songwriter Valeria Castro –the first of the Canaries to act, from La Palma–, who wrote it with her grandmother and mother in mind.

The message that Maikel Delacalle improvised before singing Se va pero returne also stole hearts, when he explained to the audience that "Canaries are like musketeers", to establish a simile about unity, while Adexe & Nau asked that "even if they have Once the volcano has been extinguished, so that solidarity and the aid demanded by those affected are not extinguished.

Throughout the two and a half hours of the concert, the presenters reiterated the two formulas to provide funds for those affected: to the IBAN ES47 2100 9169 0122 0017 9456 with the concept "volcano donation" and with the recipient "Cabildo Insular de La Palma »And through Bizum donations to code 03747.

"It is not often that artists unite in this type of movement," admitted Mikel Erentxun, a fan of Raphael, whom he saw perform last night for the first time. The finishing touch to the solidarity concert was put by the La Palma ambassador Luis Morera from Los Llanos de Aridane, with his soundtrack A la caldera, which Sara Baras danced alongside from Madrid in a toast to the recovery of the Isla Bonita.