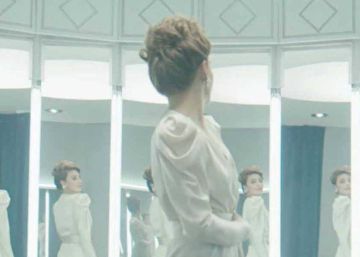 Looks are deceiving. But not always and not at all. In 1982, the upper class suffered in their flesh an economic crisis that led President López Portillo to nationalize the bank. Birthdays are over with ponies, goodbye to buy gala dresses abroad, to dance to Julio Iglesias and his I forgot to live… Even some had to leave the exclusive neighborhood of Las Lomas, where they lived outside of any foreign problem. The fall in disgrace of one of those girls well, prodigiously embodied by Ilse Salas (Cantinflas, Güeros) launches the script of, never better, Girls well, by Alejandra Márquez Abella (San Luis Potosí, 37 years old), director of Easter week (2015), which has now achieved his consecration to win the Golden Biznaga at the Malaga festival for best Latin American film.

Márquez starts explaining the appearance of Iglesias’ music in his tragicomedy: “He wanted to use his rage to take the spectator to another rage, that of the addiction of Mexican elites to Spain, a country that colonized us. They, with that musical passion , they want to belong to another world, even ethnically, above others. With Julio Iglesias I can speak almost pop of that aspiration. Hi!, a magazine that in the eighties in Mexico was a privilege. It took a couple of months to arrive and only for the chosen ones. “The same goes for the mention of El Corte Inglés.” It was the store where all the moms and aunts wanted to buy the clothes of their children and nephews, because it was super exclusive. .. It is the entire collection of Mexican aspirations for being Spanish placed in a fun way. “

In the seed of Girls well there is Guadalupe Loaeza’s homonymous novel of 1985. “This project came to me as commissioned by the producers, who opted for me to write and direct it,” recalls Márquez. “And I refused the first time. Strongly. Because of similar prejudices, if not identical, that many viewers have had before the movie premiere. I soon realized that this material would allow me to talk about inequalities in an original way. , with a new look, going to the upper class instead of those who were hardest hit by the crisis and, obviously, by the opulence of the elite, “recalls the filmmaker by phone. “You had to understand what held them to power, to maintain the inequality that even today in countries like Mexico,” he insists. “It was a difficult adaptation as the book compiles a series of journalistic chronicles published over three years in a newspaper.” The director emphasizes that the main feature of the volume was humorous, “and now.” She wanted to get away from the farce. “I feel that comedy, although it is a sharp weapon for these portraits, has taken those characters in Mexico and saved them. It does not question them. And I wanted to look them in the eye.”

In Girls well There is oppression and, above all, absolute contempt for the oppressors. There are times when the upper class is shocked because their servants are not overwhelmed. “I was very careful to show it, although I could not lose sight of the fact that the viewer must accompany the characters throughout the footage. You cannot hate them first.” In the background, in addition, the prevailing machismo, then and now. “They encourage him, especially in the elite, with that understanding of themselves as girls – something that interested me greatly – as eternal minors who need a man to protect them, to make decisions for them. Life real passes in front of them as if it were not with them at all. “

One last detail. Márquez Abella is very aware of the parallelism between the Mexican and Spanish upper classes. “Very clear, I like people to see it. The Spanish posh is identical to the Mexican strawberry.” The director knows what she is talking about, because she studied in Barcelona 13 years ago. And also the echoes with the current situation: “We will always have to enlighten and denounce those who oppress.”