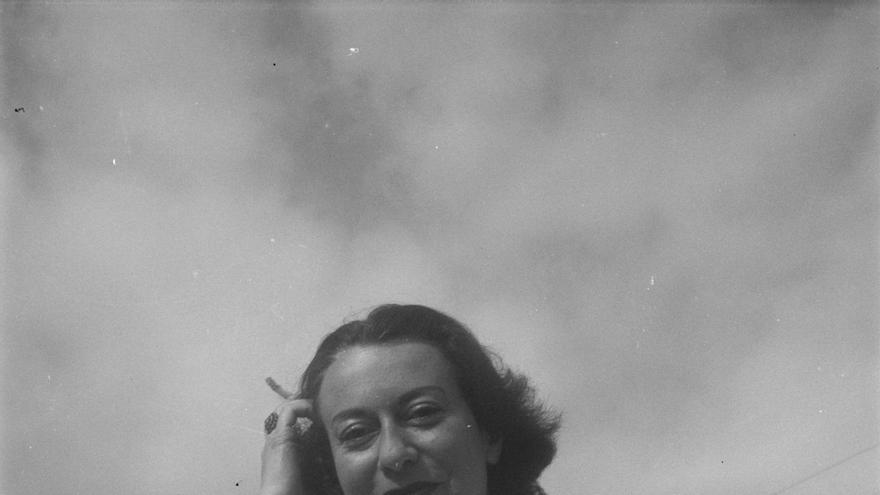 The cycle Looks at the collection that drives the Columbus House deepens today, at 7:00 p.m., in the table Judith’s arm, made by Maud Bonneaud-Westerdahl in 1971. The approach to this work is carried out by the professor of History of Art of the University of Las Palmas de Gran Canaria, German Angels.

Looks at the collection is a permanent activity since 2013 that proposes a guided visit to singular works of the Casa de Colón Collection, so every month he focuses his gaze and focus on a special piece. On this occasion, in the enamel work on tablex by Maud Bonneaud-Westerdahl (Limoges, France, 1921 – Madrid, Spain, 1992).

Admission to attend this initiative is free, with limited capacity, and prior registration is required at http://www.casadecolon.com/es/actividades.

Maud Bonneaud-Westerdahl was a surrealist artist, writer and cultural manager, at a time when the visibility of female creators was overshadowed by society. Her figure has been known since 1955, when she settled in Tenerife and adopted the surname of her second husband, the art critic Eduardo Westerdahl. She had a degree in Letters from the University of Poitiers in France and an enamel artist, but with a surrealist heart, which she channeled into intense cultural activism in Paris, Madrid and Tenerife.

However, the previous years of his life, significant and important in relation to surrealism, were forgotten by his own desire and by the society of the time. The investigation of her history has led to the discovery of the real importance of this extraordinary woman, artist, art critic and cultural activist, using published and unpublished texts by Maud herself and her private correspondence with characters of the time such as André Breton.

What’s more, Her work as a writer, despite being unknown, is of enormous interest, as is her work as a promoter of exhibitions and as a cultural entertainer. However, if something defines her career as a creator, it is the creation of enamels on metal, sometimes exempt, even as jewels, and other times mounted on board, as is the case with Judith’s arm which belongs to the collection of the Casa de Colón, explains Ángeles Alemán.

This painting was made in 1971 for the exhibition held at the Skira Gallery, Madrid, under the name of Tribute to fetishism. In this sense, Maud, by then already surnamed Westerdahl, was well aware of the importance of eroticism in the surrealist sphere and, with this exhibition, makes a great tribute to what had been one of the axes of this movement founded in 1924 by André Breton, eroticism and the deconstruction of the human body. In this splendid exhibition, he showed hands, corsets, legs with garters and this jeweled arm, as if it were a rich and colorful ex-vow, the teacher details.

“The great ability of Maud Westerdahl is, in this exhibition and in others that she carries out, to combine the elements of surrealism with the Byzantine, Aztec, Visigothic and other cultural traditions, in a work of considerable modernity”, he adds.

“The surrealist influence in her work and the broad culture of this unique artist come together in this work of art and allow us to transfer our imaginations to seductive dances like that of Judith and Salomé, and also, why not, to the splendid coloring of the limousine enamels that Maud knew so well, ”concludes Alemán.

The person in charge of making this work known to the public, Ángeles Alemán, is a tenured professor of Art History at the ULPGC, a tenured academic at the Royal Canarian Academy of Fine Arts, a PhD in Art History from the Complutense University of Madrid and a Diploma in Art by the Institute of Contemporary Art (ICA), London.

For years, and as a result of her interest in contemporary art and the avant-garde in the Canary Islands, she has developed a constant activity as an art critic and curator of exhibitions, among which those held in Havana, Seville and Madrid on art of the XX century in the Canary Islands; The exhibition Tomás Gómez Bosch, painter and photographer in the Casa de Colón; the series of exhibitions for Area 60 at TEA Tenerife Espacio de las Artes and the inaugural exhibition of the Casa de Cultura de Arrecife, Lanzarote, in 2017.

In the field of Art History, his work has focused on 20th century artists in the Canary Islands, publishing articles and books on Martin Chirino, Lola Massieu, Manolo Millares and Pino Ojeda, among others. He is currently preparing a monograph on Félix J. Bordes.

Regarding Maud Bonneaud-Westerdahl, research on this artist has been developing for years, publishing several articles about her, among which stands out The Unknown Years of Maud Bonneaud (2018). He has given lectures on her at the Institute of Hispanic Studies of the Canary Islands, in Puerto de la Cruz, and at the Atlantic Center of Modern Art, in Las Palmas de Gran Canaria.