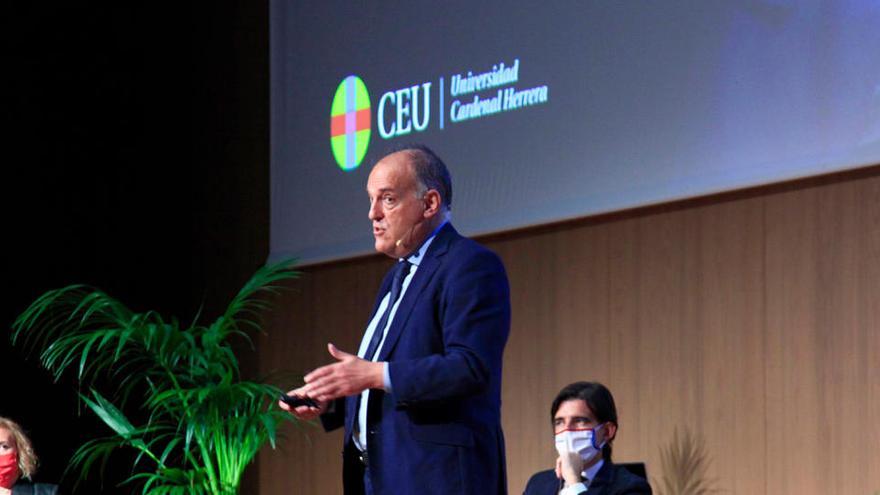 The Superior Council of sports (CSD) reported this Friday of its decision to dismiss “the request for precautionary disqualification of Javier Tebas by RC Deportivo de la Coruña and CD Numancia“.

“The CSD has rejected the request for precautionary disqualification of Javier Tebas by RC Deportivo de la Coruña and CD Numancia. The aforementioned complaints had to do with the trip to La Coruña by the Fuenlabrada CF team last July, and They accused the president of the LNFP abuse of authority, a very serious breach of the rules of the game for adulteration of the competition, conflict of interest and breach of the COVID 19 Protocol “, reports the CSD.

The resolution of the CSD to the request of both clubs explains that “an abuse of authority cannot be derived” from the president of The league. “The CSD resolution makes it clear that an abuse of authority by Tebas cannot be derived because it is not deduced from the documentation provided by the complaints that the Fuenlabrada trip exceeds the powers granted to the president of the LNFP“, he points.

“Regarding the adulteration of the competition, the resolution recalls that the agreement to suspend the Fuenlabrada-Deportivo match was adopted by the RFEF Competition Committee. Regarding the conflict of interest, the resolution states that it is difficult to avoid the final result of the match (2-1 in favor of RC Deportivo), finally held on August 7, as if to understand that the decisions could personally benefit Tebas “, he adds.

In addition, the resolution of the president of the CSD, Irene Lozano, coinciding with the Judge of Social Discipline of the LNFP and the Investigating Court of A Coruña, “dismisses the accusation of non-compliance with sanitary measures based on what was provided by the complaining clubs”.

“The CSD resolution states that the publications made by the president of the LNFP in RRSS, to which the complainant refers, do not allow deducing that they contain any meaning that represents an attack on sports dignity and decorum. And this because at no time are bad words, insults or derogatory words used for the president of RC Deportivo “, he adds.

Dapena: “For Maradona there is silence but not for the victims of violence”

All the goals of matchday 16 of Segunda