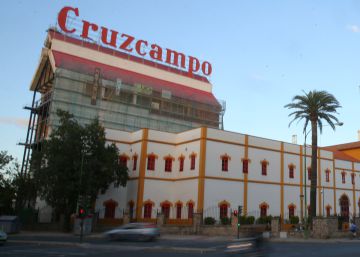 The Cruzcampo Foundation turns 25 in 2020 and will celebrate it in style. The gift, a new headquarters with 2,000 square meters, will be received next May, when the work that will turn into a large cultural center to one of the factory buildings located in the original plot where the beer was created in 1904. Of the building constructed in the thirties, only its facades will remain, because the interior is being built again, adapted to the cultural uses that will have its four floors.

"The ground floor will become a large exhibition space in which we will pay special attention to Andalusian artists. Today we wanted to offer an advance with the installation of the Sevillian duo Antoñito and Manolín. The first floor will be dedicated to collaborative work and open to projects that the citizens present to us, entrepreneurship, social innovation projects, from networking.. ", explained on Wednesday in a site visit Pilar Hermida, Director of Communication of Heineken Spain.

Trini Salamanca and Pablo Párraga, that is, the design studio Antoñito and Manolin, have premiered the space even without ending an installation inspired by Seville. "We have created a totem with pieces from our collection that includes the different materials and textures we work with such as resins, fiberglass, paper pulp, glass … that remind of architectural elements of the city, such as its wooden doors with tacks, "Salamanca explained.

"The second floor is a multi-purpose auditorium with a capacity for 170 people and, on the third floor, under this spectacular roof typical of a brewery, we will create a meeting space, with a bar at the bottom and a glazed front that allows you to enjoy the views and host concerts, presentations or talks, "added Hermida.

The property has been owned by the City Council of Seville since, in 2006, the Dutch brewer Heineken – owner of Cruzcampo – sold the land occupied by the old Sevillian factory for more than a hundred years to the Urvasco real estate group. The City Council has given it to the foundation for 75 years. In 2006 Heineken signed an urban agreement with the Consistory to build houses, a project that included that part of the land became municipal property. The brick crisis frustrated the operation that has been reactivated in 2017 and the urbanization of the land is expected to begin in 2020. The budget that the brewing company has allocated to both projects is 8 million euros and will be carried out by Labmatic, an architectural and interior design studio by Javier González Pontón.

Next, also under construction, will open the Cruzcampo Space with 1,400 square meters that will house the foundation hospitality school, which has been running for almost two decades, with three kitchens, one of them ready to showcooking, and a small craft brewery that will follow the model of the factory that Cruzcampo, the first brewer that was created in Andalusia, has set up in the Soho area of ​​Malaga, where the brewing masters work creating up to 30 new annual recipes. This new gastronomic space will be open to the public.