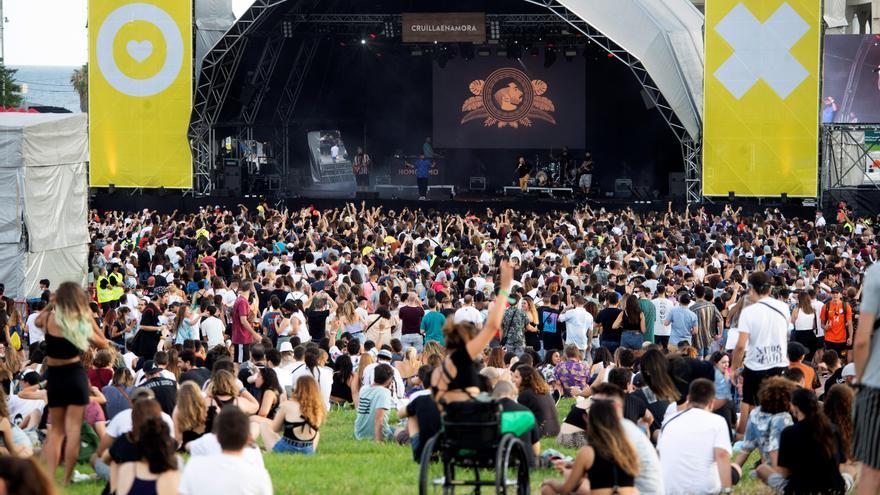 Barcelona Jul 8 (EFE) .- Hugging each other, with arms raised, chanting songs and jumping, the 18,000 attendees of the first day of Cruilla have celebrated the fact of being the first to enjoy a festival without distances or queues since the beginning of the pandemic.

Finding the formula has not been easy, but finally the Cruilla has found a way to recover the sensations of the pre-covid festivals, without subjecting the public to long lines to pass the previous antigen test, as happened in Canet Rock and at the festival Lifetime.

The urban sounds of Señor Wilson, Rayden, Lágrimas de Sangre and Natos y Waor have opened a first day of the historic Cruilla, not only for being the first massive festival in Europe without distances or queues, but also for having managed to reopen the Forum site from Barcelona to music, after almost two years.

Before the pandemic, the Forum welcomed 60,000 people every day during Primavera Sound and then the more modest Cruilla arrived, with 25,000 a day.

Now Cruïlla is the largest of the festivals to be seen this summer at the Forum, after the cancellation of Primavera for the second consecutive year.

Despite being a smaller event than Primavera, Cruilla has had serious problems to be held and has teamed up with the Foundation to Fight AIDS and Infectious Diseases to obtain the endorsement of the Generalitat.

He has finally managed to create a bubble of 18,000 attendees this Thursday, all of them with a negative result in the antigen test, on the least crowded day of this festival, which tomorrow and the day after he hopes to attract 25,000 people every day.

The Forum has been transformed into a space of freedom where the public has almost forgotten the restrictions of the pandemic, although not totally because the mask is mandatory throughout the venue, except in the restaurant area.

To avoid the unfortunate images that were seen at the Canet Rock and Vida festivals, the organizers of Cruilla have fenced off the esplanades in front of the stages and have not allowed the public to enter with drinks or food.

In addition, the staff hired by the festival has drawn attention at all times to those who tried to remove the mask at concerts and almost everyone has complied.

There are always exceptions, but most have accepted the lesser evil of the mask in exchange for being able to do things forbidden until now, like the one Rayden has asked them to do.

Not all those who had a ticket to Cruïlla tonight have been able to jump into Rayden’s concert hugging their friends, because those who have tested positive for antigens have been left out.

Of the 13,000 people who had passed through the screening area at 9:00 p.m., 123 had a positive result, a figure that reflects the growth of infections among young people, who are the majority public at mass festivals, because in Canet Rock, which was held last Saturday, the figures were lower: of 22,330 tested, 152 tested positive.

The contagions are going up and the immediate future is not promising, but the 18,000 people who have gathered this Thursday at the Cruilla festival have enthusiastically lived the mirage of a world without covid, especially when the king of the party has taken the stage, Kase.O, who has closed a night of euphoria.