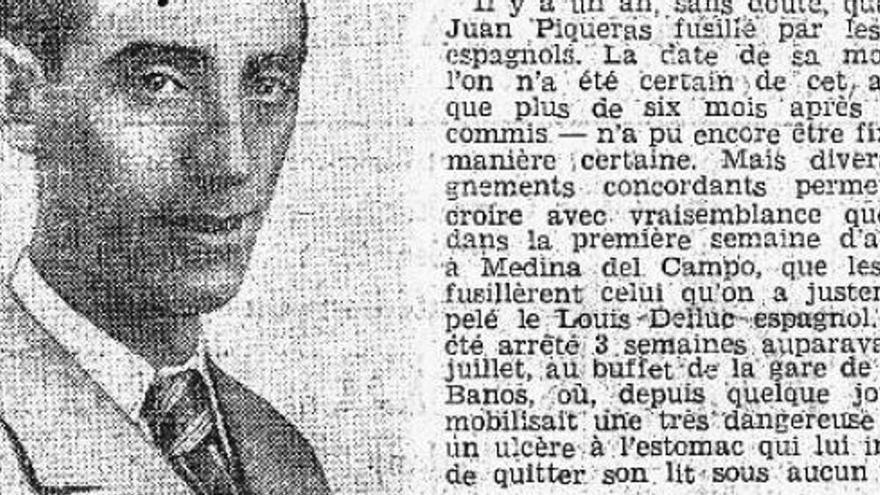 The Valencian publisher Barlin Libros and the Film Library of Valencia will be published on February 9 'The impossible years', the biography written by Enrique Fibla, current director of debates at the CCCB in Barcelona, of the film critic Juan Piqueras, assassinated by the coup forces in the early days of the Spanish Civil War.

Born in Requena in 1904, Piqueras was a key figure in the development of avant-garde film culture in Spain in the 1920s and 1930s. Creator of the prestigious magazine Nuestro Cinema, which he directed between Spain and Paris, where he lived his last years of life, he was intimate with Buñuel, among other prominent members of the intelligentsia of his time.

With "The Impossible Years", the Valencian cultural researcher Henry Fibla It aims to "open a new chapter in the recovery of historical memory, by rescuing the life of one of the missing links in the culture of our country, erased by the Dictatorship like so many others," the publisher explains in a statement.

The book is a hybrid between biography and essay, narrated in part by Ketty González, the one who was the wife of Piqueras, who was left a widow and without the possibility of finding his body, whose whereabouts are still unknown to this day.

González had said goodbye to Piqueras on a platform at Orsay station in Paris in mid-July 1936. The Valencian critic was carrying a suitcase full of books and copies of his magazine Nuestro Cinema, in where Sergei Eisenstein, Vsevolod Pudovkin, Béla Balázs, Joris Ivens and René Clair published, among many others. She returned to her house on Rue Broca with the premonition that she had just said goodbye to the luminous present that they had worked so hard to build.

They would never see each other again. Juan was shot on an unknown exact date and place shortly after the national coup d'état, despite the attempts by his friend Luis Buñuel to rescue him. The newspaper L'Humanité published an obituary in which he was remembered together with Federico García Lorca. I was 32 years old.

Ketty began a life journey that would lead her to travel to Spain in the midst of the Civil War in search of answers, suffer Franco's repression once the conflict was over, leave the country to return to a France immersed in WWII and, with the nazis at the gates of Bordeaux, begin an exile that would take her to Venezuela.

There, a decade later, he was finally able to write his story of the impossible years. The name of Juan Piqueras fell into silence imposed by the dictatorship, was recovered with the arrival of democracy by the Filmoteca de Valencia, and erased again after a controversial decision taken shortly after the Historical Memory Law was approved in 2007.

'The impossible years' part of this double oblivion to explore how certain memories are capable of getting in the way of the present. It poses a critical look at the past by a generation that, despite being born in a democracy, still feels the need to question the historical narrative in order to imagine a different future.

“Because putting names and faces to those who suffered the disastrous consequences of the War and the Dictatorship is to mobilize the imperative of memory today, so that the past that was barely present for years suddenly wakes us up from the placid sleep in which the world surrounds us. oblivion”, says the publisher.

The author of 'The Impossible Years', Enrique Fibla Gutiérrez (València, 1987) is a researcher specializing in the intersection between visual culture, archives and political discourse. He holds a Ph.D. in Image Philosophy from Concordia University Montreal, and a Master's in Film Studies from San Francisco State University. He has published in international journals such as the Journal of Spanish Cultural Studies, Film History or Screen, and is co-editor of the book Global Perspectives on Amateur Film Histories and Cultures (Indiana University Press, 2021). He has directed the research project “Cinema Artisans” at the Elías Querejeta Zine Eskola in San Sebastián and works as coordinator of debates at the Center de Cultura Contemporània in Barcelona.