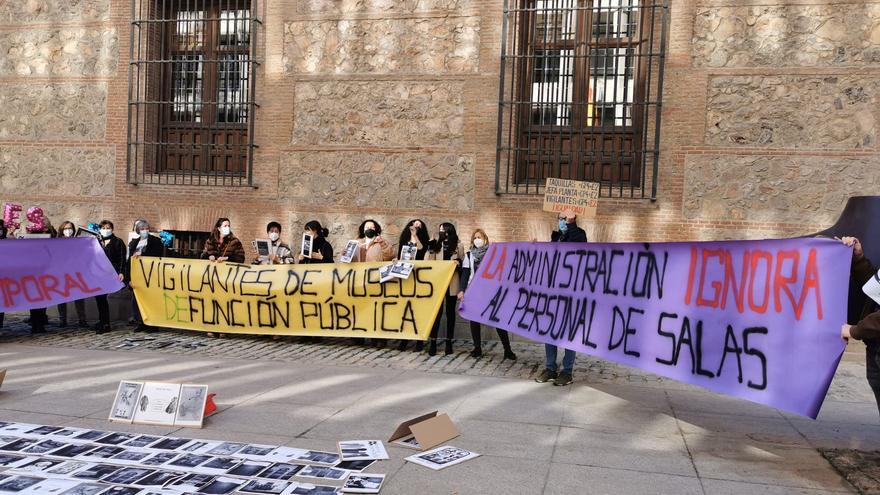 For state museum room guards everything changed in May 2019. Then it was approved a new labor agreement agreed by the Government and unions that, among other things, established new professional groups based on work activity. Those who were previously part of a Group 4, as is the case of the guards, went to E1 with the consequent reduction in rank.

"They have really degraded us, since where we have to be is in E2. They asked us for access requirements and an agenda in relation to Group 4, not a lower one. It is a comparative offense and we wonder why we ", tells elDiario.es one of the security guards affected, who prefers not to reveal her name.

They are a group, mostly made up of women over 50 years of age, who are now downgraded despite having sufficient training: the content of the opposition they studied at the time is identical to the one they ask for to access the E2, the group in which they do not want to frame them.

It also highlights that the status of other posts in Group 4 has changed with respect to the initial agreement. This is the case of the blockbusters, who went to an E2 after a resolution in March 2021. The vigilantes, on the other hand, remain stuck in E1. But what exactly does it affect?

"We cannot promote or ask for a transfer to another job if we do not have the specific degree that they ask for. If I wanted to work in ticket offices now I would have to study intermediate vocational training in Commercial Activities. If, for example, you have advanced vocational training in Marketing, It works for you, they keep asking for the middle one. It's not even worth having something similar, "criticizes the injured expert. Before there was no problem in that the workers framed in Group 4 could replace each other, but the situation has changed. "There are museums in which there is only one ticket clerk and when someone is free he has to replace him. It is what we have always done until now, the room guards, until the arrival of this agreement," she adds.

In fact, last summer the lack of staff was "compensated" with free admission to 14 of the 16 museums managed by the Ministry of Culture. The reason, according to them, was that "there were no ticket booths and the mobilities were prohibited, because we were not yet framed nor were there vacancies, they could not be carried out," alleges the security guard. Now the problem is being solved with another system: forced mobility.

"They force you to replace that colleague even though he is in a higher group. The room guards are the largest group of museums, so if someone from the box office, information or a floor manager is missing, we are obliged to replace them because of Otherwise they open a file for you. You cannot promote to the position if you do not have the degree, but to solve the ballot that day there is no problem, "he recriminates.

This newspaper has contacted the Ministry of Culture, but they refer to the Civil Service as it is an issue related to civil servants. From this body they point out that they are "aware of the aforementioned problem", but that "the framing of the workforce has been carried out in accordance with the classification system contemplated in the IV Agreement". They do not clarify whether a review of the category of room guards is proposed, as happened with other professionals in Group 4, or why forced mobility to a higher position is allowed but not promotion to that same position. "What interests them is that the museums work and if for that we have to replace the person who is missing, whether we have the degree or not, they do not care," reproaches the worker.

To this situation we must add that of people in a temporary employment situation, who despite having passed the opposition have not obtained a place. "If they leave us framed in an E1 now they ask us for a basic FP that is only studied until the age of 17, with which no one will be able to access it," criticizes the security guard.

This is a scenario similar to that denounced by the Platform of technicians and technicians affected by the OEP 2018, which protested because public theater professionals with higher education cannot access certain places in that public employment call if it is not with the degrees of FP that marks the IV Single Agreement. For them, the Administration's response has been a job consolidation system that they can opt for with the studies with which they were admitted to the INAEM job bank.

But the room guards have been denouncing their situation for some time, although they assure that the answer has not yet arrived. “We are now receiving the answers to the appeals that we made in March 2021. Nobody has answered the rest of the writings that we have made,” observes the affected professional. According to her, the unions do not stop saying "that everyone asks for the E2 group for us and that the inconvenience is only from the administration". So, the professional asks: "Where is the problem with what we ask for?".