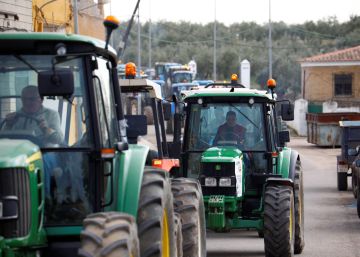 Farmers and ranchers retake this Friday the Protests for low prices at the origin of agricultural products with demonstrations and tractorates in various parts of Spain, after which they starred in various parts of the country since the end of January. Valencia, Lleida or Baena are already the scene of mobilizations, while the Minister of Agriculture, Luis Planas receives representatives from Mercadona, the distribution leader, a sector that producers blame for throwing prices and using loss-selling strategies or resort to offers of claim products that further push down prices. The Minister of Labor, Yolanda Díaz, and the Vice President of Social Rights, Pablo Iglesias, receive agricultural union representatives.

The most important protest this Friday has occurs in Valencia, where farmers from across the Valencian Community are going to star in a tractorate through the streets of the city. There are already many vehicles traveling the route from the Plaza de San Agustín and to the Plaza del Temple, which has forced the city center to close. They denounce a “borderline situation” by the high production costs and land prices of agricultural products. They ask for a new law of the food chain and they are the ones who set the prices of their products, and not the supermarkets.

The Government Subdelegation in Valencia has called on citizens to avoid as much as possible the use of the private vehicle to access the Valencian capital before the “tractorate” and demonstration called by the agricultural organizations AVA-ASAJA, the Unió and UPA , reports EFE. At the end of the demonstration, the representatives of the agrarian associations will meet with the Government delegate, Gloria Calero.

In Lleida, four columns of tractors converge throughout the morning towards the city center. Trade unions and agricultural organizations, with the support of the town halls of towns more dedicated to the field, call for urgent measures after losing, according to their figures, 60 million euros in the last campaign.

Olive growers have also concentrated in the town of Baena (Córdoba), according to Cadena Ser. The case of the olive grove is highlighted, because the abundant harvest last year, which lowered prices, joined in October the tariffs imposed by the US Government, which has greatly reduced exports and caused surpluses. In addition, olive oil is usually one of those claim products with which the distribution tries to attract its customers.

Meanwhile, the Government maintains the activity for try to stop the countryside crisis. The Minister of Labor, Yolanda Díaz, and the Second Vice President and Minister of Social Rights and 2030 Agenda, Pablo Iglesias, meet with the agricultural unions. In principle, those of Andalusia and Extremadura were cited, but Ángel García Blanco, of Asaja Extremadura, has told TVE that last night he was summoned by the minister. The job holder is especially responsible for impact in the field of the rise in the minimum wage (SMI) although there is also a possible reduction in the number of steps needed to access the Rural Employment Plan (PER) grants. Yesterday, Díaz said that the meeting was to listen to “what are the needs” of the sector, to know “how to help the most affected in the field in situations that are difficult” and collect “measures that can be assessed,” he reports Servimedia

The Minister of Agriculture, Luis Planas, meanwhile, continues with his meetings, in addition to the agricultural associations, also with the distribution sector, to which the President of the Government, Pedro Sánchez, asked for self-criticism for the price difference in origin with respect to the linear ones. After his meetings with Carrefour and Lidl, this Friday is the turn of Mercadona, leader of the distribution in Spain. Yesterday, after meeting with representatives of the Lidl chain and agricultural associations of the fruit and vegetable sector, Planas assumed that there are changes “imminently” in the law of the Food Chain to address some of the problems currently facing the sector agrarian, to later deal more calmly with the transposition of the European directive on Unfair Commercial Practices, which would imply a deeper modification of this law. Specifically, regarding impending reforms, Planas referred to issues such as the sale of losses, unfair promotions or making sanctions to supermarkets public when they commit serious or very serious offenses.

He also pointed out, although without announcing concrete measures, that “with no intention of closing the door on anyone,” he would advocate in Brussels for any agricultural product that comes from outside the EU to be required to meet the same phytosanitary standards that European farmers must meet. . “It is a legitimate demand of the sector that I support and we don’t close the doors to anyone,” he said.

The Government charges the contributions of March to 3.2 million freelancers