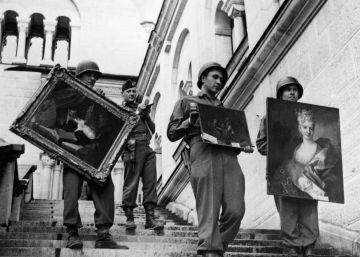 THE FAKER IN HIS LABYRINTH

Correct painter, whose original work was impregnated with a symbolic and mystical tone, Han van Meegeren was a resentful man because he hardly reaped success throughout his life. But he would end up achieving genius as the creator of Vermeers. Vermeer was rediscovered in the mid-nineteenth century by art historian Téophile Thoré, who wrote in 1866 the first monograph on the painter. Until the end of the nineteenth century he was an almost unknown artist: still in 1881 a collector was able to buy at an auction in The Hague The girl of the pearl for two and a half florins. But at the beginning of the twentieth century his work was revalued until reaching Rembrandt prices, and in the interwar period discovering a Vermeer was for any dealer like finding the Holy Grail. In the twenties and thirties numerous works in his style appeared, genre portraits or paintings, fakes or period paintings retouched to appear that they had left his hand. Some of them came from Van Meegeren’s brush. It was the case of The young girl with the blue hat, that the Thyssen had bought in 1930 from the dealer Paul Cassirer. A work so skillful and perfect that Max J. Friedländer endorsed it at the time, and the real authorship of Van Meegeren was not discovered until the fifties.

As Theodore Rousseau observed in 1968, that by now he was no longer the young OSS officer who was chasing Alois Miedl at the end of the war, but the reputed chief conservative of the Metropolitan Museum of Art in New York, Van Meegeren, mediocre at painting in his own style, he had a great start when he did it as if it were another. He understood that very little was known about Vermeer’s life, that works of his youth were barely preserved, and that one of them was religious: Christ in the house of Martha and Mary. With these wicks, he conceived an idea as bold as superb. Instead of recreating the paintings of maturity, those of secular and mundane character, starring men or women in domestic spaces, would take advantage of ignorance about their early years to forge a whole stage in the painter’s life: the biblical phase, the Vermeers « that they should have existed », a limited series of paintings that the artist would have made in his youth for a clandestine Catholic church in the Netherlands, a Protestant majority in the seventeenth century, and that came to Van Meegeren without his need never how it happened.

He laid the foundations of the new style with Emmaus dinner, which he produced between 1936 and 1937, whose discovery subjugated dealers, collectors and museum directors from around the world, and which acquired the Boijmans Museum in Rotterdam in 1938 for just over half a million florins. In the following years another five appeared. The last one was Christ and the adulteress. He dismantled the imposture in July 1945 Joseph Piller, an officer of the Dutch army. Before making it public, he consulted several experts. The rumor circulating to date in the art world was that Van Meegeren, with the help of an accomplice, would have stolen the paintings from the same collector. But if there were doubts about whether Van Meegeren was a thief or not, few questioned that the paintings were from Vermeer. To the point that Van Meegeren, a radical fascist who supported the Nazis during the occupation, was accused of collaborating after the war for selling masterpieces of the Dutch pictorial heritage to the Third Reich.

In order to avoid jail, the fake recognized that the Vermeers of the biblical stage that he had placed on the market were his work, a true fraud. But the deception was of such quality and so many experts had fallen into the trap that, to their despair, almost no one believed him or – at least – acknowledged believing him because the reputation of the Dutch art world, which had celebrated every new appearance, was in question. Few were willing to acknowledge that this exceptional forger had succeeded in deceiving historians and art critics, dealers and gallery owners, museum directors and curators. To prove that he was the father of the Biblical Vermeers, he had to paint a new work in the series: Christ in the temple. Only then did he convince the skeptics and softened his sentence. When the trial was held in October 1947, the prosecutor had already swapped the charges of collaboration with the enemy for those of forgery and fraud. He was sentenced to one year in jail, but failed to comply because he died on the penultimate day of 1947.

Van Meegeren was a master of imposture. Others of his size proliferated in the interwar period and made a fortune during World War II: the Italian Icilio Joni, a specialist in Italian primitives, or the Belgian Jef van der Veken, restorer of the collection of Émile Renders and expert falsifier of Flemish painting . In their own way, the three were exceptional artists, great fakers. But many other worse quality frauds proliferated in the mad art market of Europe dominated by the Third Reich.

Faced with the intense demand for paintings by the old Flemish, Italian or Dutch masters, dealers, collectors, counterfeiters, of better or worse aptitude, or simple scammers willing to do business with the unsuspecting abounded: some imitations were magnificent, made on boards or canvases of the time or with pigments obtained by scraping old authentic paintings of little value; others had been retouched and restored to Tuntun. Suspicious attributions abounded; the school or workshop images sold as if they were the creation of the teacher on duty; the copies made during the eighteenth or nineteenth centuries, and therefore had a patina of antiquity; the trimmed tables to eliminate imperfections or the works of the heap overwritten with the signature of great painters. And there was no lack of experts willing to earn extra money guaranteeing any mixture. Greed opened the doors to the scam. Miedl moved in that little world like a fish in the water.

Counterfeits are a product of the market. “If there were no art market there would be no counterfeiters,” painter Edith Sommer observes in 1976 in a scene of F for Fake, Orson Welles’ movie about Hory’s Elmyr forger. But they do not depend only on the very existence of the market: also on their mood. They are scarce when they remain static and multiply when demand grows and is frantic, Theodore Rousseau wrote in 1968. During World War II they were a plague. «In the French art market – in December 1943 a correspondent of The New York Times‍– counterfeits abound. Numerous frauds have ended up in the private collections of the Nazis ». Paris was “full of counterfeits,” reiterated an allied report. And the Germans were, on this occasion, the victims of picaresque. They not only bought frauds on paintings that fit the official Nazi canon. They also chopped with modern painting: works by Corot, Renoir, Modigliani or Picasso. The latter’s paintings “reached very high prices all over the planet and, obviously, were very easy to falsify.”

Whether it was for the love of art, for investing in solid values ​​or for ensuring a peaceful future, the invaders were eager to buy. And imbued with that anxiety impregnated with greed, put to acquire without rate or control, they received a considerable number of copies, frauds and impostures. The German authorities were aware of this flood and came to establish in 1943 a Central Office to combat artistic counterfeits, an agency that did not help. Except for notable exceptions, many were gross, mediocre works, because, as the historian and art critic Marcel Fischer observed in 1944, in peacetime, when there is time to reflect and analyze an acquisition calmly, the counterfeiter must make a greater effort to convince your potential customers and frauds are usually of higher quality.

Everything fit into the delirious European market during the war, plagued by new rich who wanted to invest their fortune in a safe value like art, but lacked a refined taste and knowledge enough to distinguish a masterpiece from a maula. Or from inexperienced collectors without judgment that they understood them and were willing to pay a fortune for a beautiful painting or result. Hitler himself had among his main suppliers Maria Almas-Dietrich, widow of a Turkish carpet merchant of Jewish origin, friend of Heinrich Hoffmann and mother of a close friend of Eva Braun.

Almas-Dietrich owned a small shop of carpets and works of art of second category in Munich and managed to enter the environment of Hitler. It lacked criteria and talent, but it ended up being one of its main suppliers, to the horror of art historians who advised the Führer, who received scandalized their remittances of paintings: the Linz Museum bought him about 270 paintings, a good part of which They were of poor quality or false. “I have shown the Führer the watercolor he sent with his letter of May 8, 1942, and we both consider it to be an obvious forgery,” Martin Bormann wrote to the gallery owner in May 1942. “This demonstrates once again how important it is. in the future study very carefully all the old paintings ». The admonition was useless: neither Souls-Dietrich was more careful, nor did Hitler stop buying paintings.