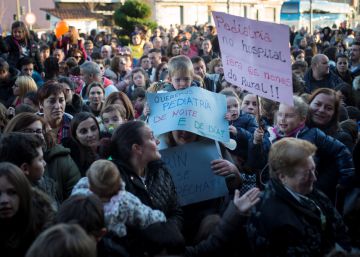 The decision of the president of the Xunta, Alberto Núñez Feijóo, to close the maternity area of ​​the regional hospital of Verín (Ourense) appealing that the low birth rate “subtracts the gynecologists’ expertise” puts the Galician leader more and more against the ropes. Nuria Magallanes, a nurse at the Continued Service Point (PAC) of the Orensano municipality of A Gudiña and councilor of the PP in that City Council, gave birth yesterday in the hospital parlor of Verin that her regional leader closed. As on two previous occasions since it was ordered to divert all deliveries to Ourense, the gynecologists on duty assessed that the pregnant woman would give birth on the road if they did not assist her in Verin.

The woman was in the 38th week of gestation and went to the regional hospital in the morning, a reference for more than 30,000 inhabitants of that and other surrounding municipalities. During the examination, the gynecologist observed that the pregnant woman, mother of four other children, had a dilation of seven centimeters and ruled out the transfer to the Complexo Hospital Universitario de Ourense (CHUO), an hour away.

The gynecologist asked CHUO to send him to a pediatrician to attend the newborn. As on the last occasion, this came after the birth occurred, according to hospital sources. By then, mother and son were perfectly well. The mayor of A Gudiña and head of Magallanes ranks in that City Hall, Guillermo Lago, immediately showed the joy for the birth and his discomfort for the political decision of the regional leader of his own party.

The experience that his councilor has had to live has reaffirmed the popular councilor in the conviction – shared and disseminated since December by the entire Ourense PP, headed by the provincial president, José Manuel Baltar – that there was no need to close the Verín parish, but provide it with pediatricians.

The rebellion remains, in fact, active in the province of Ourense since November 30, after knowing the decision of the closure, the pregnant women of the affected regions will lead a mass demonstration. This was followed by a neighborhood confinement, which already reaches 45 consecutive days, in the premises of the Verin hospital itself. In the midst of conflict and with the neighbors camped next to his office, on December 27 the director of the regional hospital presented his resignation. He claimed “strictly personal” reasons. The Xunta, which by then had already begun to recline, turned to a retired doctor in 2017, Guillermina Agulla, to replace him.

The councilor of the PP has become the third woman to whom nature – and the decision of doctors – has led to disobey the order of the Galician Government. The first birth against the decision of the Government of Feijóo took place twelve days after the Galego de Saúde Service (Sergas) decreed the closure of the Verinense parish. The head of Gynecology, Javier Castrillo, called the judge on duty to report that if he sent her to Ourense, she would give birth on the road taking risks. He opted to “preserve the superior good” and assisted the woman in childbirth at the regional hospital. 22 days later another baby was born in the closed paritor. The mother signed a letter expressing her refusal to be transferred to Ourense. The delivery was so fast that he didn’t have time for an Ourense pediatrician to arrive.