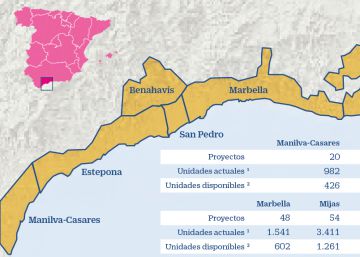 “On the Costa del Sol there has been the circumstance of loading multiple promotions in a short term, so that the offer, previously limited, now generates a lower absorption rate than in previous years.” This is the scenario that describes Samuel Population, residential director of the CBRE consultancy. A coincident opinion between experts and real estate agents on the situation of the Malaga coast, in which the promoters have sought business in the return to construction after almost a decade of crisis and where now there is saturation, slower sales rates and initiatives that They fail before starting.

From Manilva to Torremolinos, the Costa del Sol adds 267 second-residence projects, to commercialize 14,966 homes, of which 5,132 are unsold, according to the details of Prime Invest consultancy, a firm specialized in this area and in the international buyer market .

CBRE calculations also encrypt initiatives for around 15,000 homes on that coast. Additionally, the consultancy calculates another 143 located in the city of Malaga, which total around 5,600 houses, which gives more than 20,000 residences in commercialization in a 100-kilometer coastal stretch.

The black point of saturation that all respondents repeat is Estepona. “Investors and promoters moved from Marbella to Estepona due to the uncertainty generated by the return to the General Urban Planning Plan of 1986 and the delays in licensing. The municipality, which was traditionally linked to a lower level of purchasing than that of Marbella has turned more in recent years in high-end ”, explains Pedro Soria, commercial director of Tinsa. “There are currently around thirty simultaneous promotions being built in Estepona. Medium size promotions, in different phases. There is a lot of offer, but there is no sense of alarm. Demand there is, but possibly it has reached a price level that delays decisions and moves away certain buyer profiles, ”he says. “The price increase was concentrated in the 2016-2018 period. If four years ago the claim on the construction posters was ‘From 120,000 euros’, now it is seen ‘From 200,000 euros’. In the last year, new construction prices have been stabilized. We will see if the cooling of the demand that is already observed at national level and Brexit can end up causing a correction of the supply volume in the locality ”, details Soria. Even so, housing prices in those 10 locations from Manilva to Torremolinos are between 13% and 33% cheaper than in the boom of the past decade.

A recent report of Santander Corporate & Investment Banking It coincides with respect to this locality of Malaga, gathering the opinions expressed by the business leaders in the 26th Iberian Conference organized by the bank. “Aedas reiterated the message conveyed in the results to the third quarter of 2019 that, within its portfolio, the areas with the slowest absorption rates are in Estepona (Málaga) and the area east of Seville, ”is reflected in the document . In fact, this listed developer controlled by the Castlelake fund has initiated the design of an alternative project focusing one of its Estepona plots on the senior client, in a kind of resort residential with adapted services. “The company highlights that the pace of sales in Estepona is currently very poor. In his opinion, this is mainly due to excess supply and not to weaker demand, ”reflects the Santander document on the valuation of Neinor

“It is surprising to see that in this relatively small geographical space there are 254 new construction projects with at least one open point of sale, in different stages of development. Some have not started their material execution totaling more than 15,000 units, a figure that is certainly very high ”, agrees Darío Fernández, partner in Prime Invest.

Experts point out that what is also happening is that there are projects that do not get the necessary presales in six months that guarantee bank financing and, therefore, cannot start. The pace of sale means that 32% of the new promotions have not been able to sell all their homes in the commercialization process and are for sale once the work is finished, according to data provided by BNP Paribas Real Estate. “The residential sector is very solid, capitalized, little indebted and with the capacity to face cycle changes with liquidity,” recalls, however, Population.

Another immediate consequence moves to the slowdown in parcel transactions. “The land market is practically stopped,” says Soria, from Tinsa. “We have had a lot of movement and ground transactions in the last four years. However, in 2019 we have noticed a great decrease in the closing of this type of operations. Undoubtedly, a high supply volume has quickly translated into greater prudence for promoters already present in the area and for those who analyze their first project, ”said Fernández, from Prime Invest. “I think the best news is that the demand remains firm and stable. We have buyers and many operations are closed. The difficulty is to distribute this stable demand among more projects for sale than 12 or 24 months ago. Which will greatly slow down the pace of sales according to which projects, ”he adds.