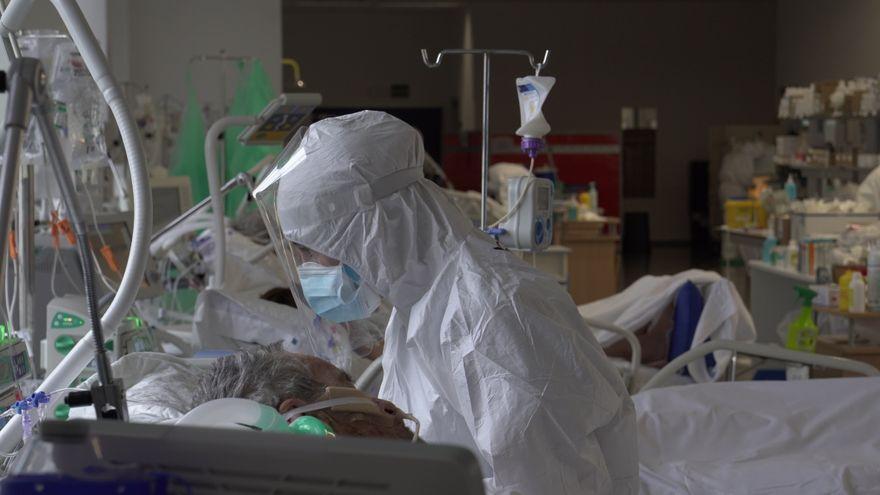 Deaths during the two years of the COVID-19 pandemic multiply by three the deaths officially attributed to the disease: if the country records add up to 5.9 million lives lost, the excess mortality worldwide goes to 18 .2 million, according to a review by the Institute for Health Metrics at the University of Washington published in The Lancet.

X-ray of 70,000 deaths in the worst of the pandemic: excess mortality, municipality by municipality

"The true cost in lives has been much higher," concludes this investigation that has been set in 191 countries and territories. "The full impact of the pandemic has been much deeper than the death reports indicate," the document abounds.

The authors warn that they have had to use statistical models for countries that cannot update their records of deaths from all causes on a monthly or weekly basis.

Excess mortality is the difference between the number of registered deaths from any cause and the number of expected deaths based on cumulative trends over the years. In Spain, this variable (the MoMo that became famous during the most tragic months of COVID-19) It already added 90,000 deaths above what was expected at the end of October 2021. An excess of deaths of this caliber had never been experienced: between March 25 and April 5, 2020, 20,000 people died a week.

The area of ​​the planet with the most excess mortality has been Southeast Asia with 5.3 million deaths above the historical trend. It is followed by North Africa and the Middle East (1.7 million) and Eastern Europe (1.4 million)

Although this phenomenon has been well known in Spain, the study by the University of Washington offers a global vision. Excess deaths vary "dramatically" between countries and regions, reflecting how COVID-19 has affected populations very differently depending on where they lived.

In absolute terms, the area of ​​the planet with the highest excess mortality has been Southeast Asia with 5.3 million deaths above the historical trend. It is followed by North America with 1.7 million and the Middle East. Eastern Europe had an excess of 1.4 million.

As for countries, the highest number of unexpected deaths occurred in India (four million); then the United States (1.1 million); Russia (1.1 million); Mexico, with 798,000; Brazil (792,000) and Indonesia, with 736,000. At the other end, countries like Australia, New Zealand, Iceland or Singapore have reported fewer deaths than expected.

As for the excess mortality rate (that is, the number of unexpected deaths per 100,000 inhabitants), the highest have been recorded in the Andean countries, Eastern Europe, Central Europe – the Balkan states, Hungary, Poland… .–, Sub-Saharan Africa and Central America. It is noteworthy that some states in the south of the United States also present rates similar to those of these other countries.

The study attributes to Spain 160,000 excess mortality deaths and a rate of 186 per 100,000, less than Italy, but more than Germany, France or the United Kingdom.

"Understanding the real death toll of the pandemic is vital to making effective public health decisions," says study lead author Haidong Wang. Some studies conducted in Sweden and the Netherlands suggest that COVID-19 is behind of most of the excess deaths, but Wang insists that research must continue: "Currently we don't have enough evidence in most countries, so more research will help establish which were directly caused by the disease and which were a result of the disease." indirect of the pandemic".

The causes of such a large difference between the official numbers of COVID deaths and the data (in many states also official) of excess mortality must be sought in "an underdiagnosis of the disease due to the lack of tests and problems when it comes to report the data", analyze the authors.

Haidong Wang, researcher at the University of Washington (USA)

The gaps arrive, therefore, "because, generally, public health systems did not include cases that did not have a positive test for the SARS-CoV-2 virus as deaths from COVID-19," the study details. And it was not a problem, as might be intuited, exclusive to impoverished countries: "It is unlikely that many of the deaths that occur among the oldest people in high-income countries, especially in residences, have been attributed to COVID-19. There is evidence that it was underestimated in many places."

Of course, in Spain, the impact of the pandemic on centers for the elderly was brutal. More than 32,000 deaths that exposed the shortcomings of the care system. And, in the first wave, the Government of Madrid drew up a protocol that, de factoprevented the transfer of suspected COVID-19 patients to hospitals. The Autonomous Executive in Castilla y León also ordered not taking residents to hospitals at the peak of the first hit of the pandemic

Other problems detected by the Metrics Institute of the American university are the lack of a "universal consensus" in the medical community to consider that a person with COVID dies from COVID or the "political considerations" that prevented an "accurate" report.

However, this kind of global MoMo also clarifies that the exact cause of all deaths is not known: "It is crucial to be able to distinguish between deaths caused directly by COVID-19 and those that are indirect, but also a consequence of the pandemic."