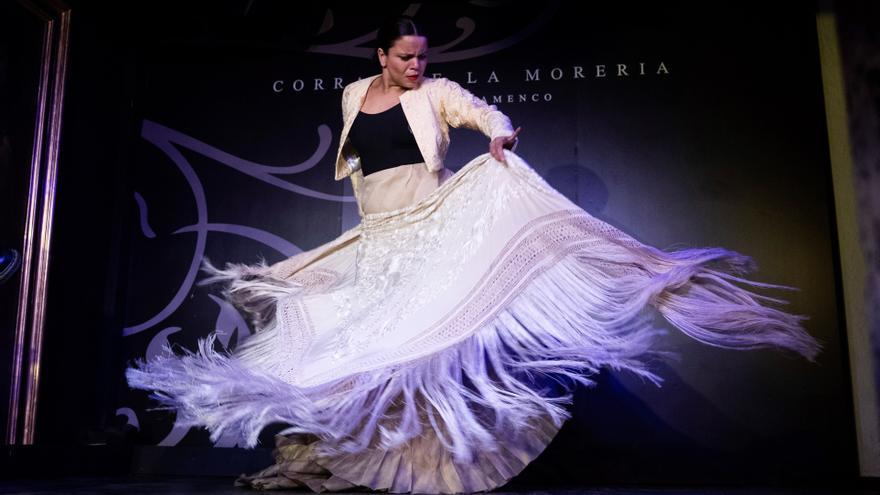 Madrid, May 19 (EFE) .- Until May 20, 1956 the hotelier Manuel del Rey did not open the doors of Corral de la Morería in Madrid, he had never seen “caviar, lobster and waiters of tuxedo, “a new concept that attracted as many stars on their boards as they did in the crowd.

Paco de Lucía, La Chunga, Fosforito or Isabel Pantoja played, danced and sang between those walls that kiss the Parque de las Vistillas in the capital before celebrities such as Ava Gardner, Rock Hudson, Frank Sinatra, Ron Wood or even “the first astronauts who stepped on the moon “.

Blanca del Rey, co-owner and “the best bailaora in Córdoba”, remembered it just a few days ago, as she was presented to the owner so that he would hire her at only twelve years old. She would have to wait two more and a special permit to debut there in crowds praise and another five to marry her discoverer.

“This has been my university in every way. I am moved to remember what I have lived here, an exception in life, with kings, presidents and artists,” he highlighted in an event in which he was present only in video format by medical recommendation, being recently vaccinated against covid-19.

He probably never imagined that a virus would be the cause of the greatest agony of the place that he has continued to run together with his children Juan Manuel and Armando since the death of her husband in 2006, an agony that has had them 14 months with the doors closed and that in reality it is still due to sanitary restrictions, but which they have decided to face.

“We cannot miss a date as important as the 65th anniversary of Corral de la Morería, which means everything to us and which has been an institution and a meeting place for cultures and art,” he explained about the reasons that led them to to reopen with only 25 percent of the capacity, that is, just over 30 people.

There will be no restaurant service at the moment, although the entire team remains faithful to its side, including chef David García, trained in the kitchen of Martín Berasategui, to ensure the maintenance of its Michelin star (it is the only tablao that owns it) and the good cuisine that from the beginning has been one of its hallmarks.

“Who would have imagined that a tablao would be opened with caviar, lobster and waiters in tuxedos?”, The former director, Luis Aznar, recalls rhetorically. “The oldest thing that is here is me”, boasts with humor about to turn 89 years old who entered to work at this place with just 23.

A modern tablao “with the best flamenco artists of the moment and with first-class gastronomy”, Del Rey was seduced by that dream, whom he still calls “brother”, when both were involved in Riscal, the restaurant that his father had in Madrid and that served as their first school.

Since the first night with Pastora Imperio, who returned from her semi-retirement to inaugurate it, Aznar has seen the greatest of the genre pass through here: Antonio Gades, María Albaicín, Manuela Vargas, Mario Maya, La Paquera de Jerez, Lola Greco, Diego el Cigala, José Mercé and Antonio Canales, among many others.

Isabel Pantoja also debuted on their tables and Paco de Lucía premiered the emblematic “Between two waters”, while between their tables, with the best of art and aristocracy, historical romances and sovereign fights were woven.

The annals of the Corral say that one night they were visited by the Shah of Persia himself and that he coincided with a group of impressed Iranian students. One of the young women asked the director to introduce them and in 1959 she became his third wife, Farah Diba, the last empress of the country.

It is also known that Ava Gardner, a regular at her shows, had a table specially reserved for her (“near the bar”, the owners point out), and that one night, she might be bothered by the rumors that already related her to the bullfighter Luis Miguel Dominguín, had a loud discussion with Frank Sinatra.

To that, by the way, they came to sing “Strangers In The Night” right there, but “a cappella” and flamenco, with an English more typical of the Gypsy Prince’s dictionary and converted into “Pastis in de flais”, according to the owners, who cannot help but remember another evening in which John Lennon spent the day in the tablao learning chords from his guitarists.

History reopens its doors tomorrow. “And we will continue with the same philosophy and enthusiasm to bring the Corral to its maximum expression,” said Juanma del Rey, before a stage that starts with a “show” dedicated to women, “Guerrero” by Eduardo Guerrero, and before the emblematic painting “Pelando la pava” by Juan Barba, subjected to a restorative “lifting” that has taken away half a century of cigars, smoke and complaints.